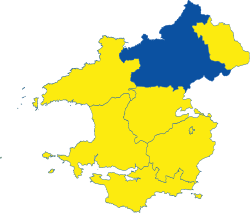 Pembrokeshire showing the hundred of Cemais

Cemais (sometimes spelled Kemes after one of the several variations found in mediæval orthography) is a hundred of Pembrokeshire, in the north of the county. It occupies the coastal area between the Teifi estuary and Fishguard, and the northern and southern slopes of the Preseli Hills, and has an area of about 88,700 acres. It is bounded by Cardiganshire to the north-east; by Cilgerran Hundred to the east; by Carmarthenshire to the south-east; by Dungleddy Hundred to the south; and by Dewisland Hundred to the west. It had a population of 12,915 in 2011.

The hundred originates as a cantref of the Kingdom of Dyfed, with the Afon Nyfer dividing it into two commotes: Is Nyfer to the north and Uwch Nyfer to the south.[1]

It was occupied by the Normans in the 12th century, and made part of the March, but remained exclusively Welsh-speaking. The initial power-base of the Marcher Lordship was at Nevern, but was soon moved to the borough of Newport, which remains the seat of the Lords of Cemais in modern times. Nevern was the ecclesiastical centre of the cantref, and may have been the seat of a bishop.[2] George Owen was Lord of Cemais 1574-1613 and produced a detailed parish-by-parish description of the Lordship in his second book.[3]

The Hundred of Cemais evolved from the cantref at the time of the Laws in Wales Acts 1535–1542, by transferring the parish of Llantood to Cilgerran Hundred and adding a small area of Gwarthaf cantref.[4]