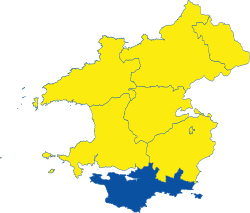 Castlemartin Hundred is a hundred of Pembrokeshire, located in the south of the county. It has a land border with Narberth Hundred to the north-east; and across the Daugleddau estuary with Roose Hundred to the north-west. On all other sides it is bounded by the sea. It is the second-most populous of the hundreds, after Roose, with a population of 23,825 in 2011.

Initially created by the Marcher Lords of Pembroke in the 14th century from the western part of the pre-Norman cantref of Penfro, the hundred was confirmed by the Laws in Wales Acts 1535-1542.[1] The hundred, with its capital at Pembroke was early settled by English and Scandinavians, and was a centre of the Norman English "plantation" in the 12th century. Since then it has been entirely English-speaking, and part of Little England beyond Wales.