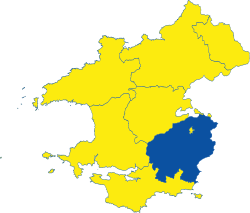 The Hundred of Narberth is a hundred in Pembrokeshire, named after the town of Narberth, which it contains. It is situated in the east of the county, bounded to the east by Carmarthenshire; to the north by Dungleddy Hundred; to the west by Roose Hundred; and to the south-west by Castlemartin Hundred. It had a population of 21,448 in 2011.

The hundred was formed by the Laws in Wales Act 1535 from parts of the pre-Norman cantrefs of Penfro (the commote of Coedrath) and Cantref Gwarthaf (the commote of Efelfre).[1] It derives its Welsh-language name from the town and district of the same name, which means "(district) by the wood", (that is the forest of Coedrath).[2] The hundred spans the Landsker line, with the parishes of Velfrey being identified by George Owen[3] as Welsh-speaking, and the southern coastal part being English-speaking, part of Little England beyond Wales.