Haverfordwest Castle is a castle standing in the town centre at Haverfordwest, Pembrokeshire. It stands in a naturally defensive position at the end of a strong, isolated ridge. The castle was established during Norman times in 1120 but much of the architecture remaining today is dated to 1290.

There are several other notable castles in area; Wiston Castle lies six miles to the northeast and Pembroke Castle twelve miles to the south.[1]

Pembrokeshire Records indicate that there was an Iron Age hill fort on the site of the castle although there is no physical evidence to suggest this on the present location.[2] Haverfordwest was believed to have been a Danish settlement prior to the Norman conquest of West Wales in 1093/94.[2] Flemings settled in the area in great numbers 1108 to spur trade and to protect the main Norman stronghold at Pembroke Castle from raiders from the north.[2]

The vast majority of sources indicate that the structure was originally a Norman architecture stone keep and bailey fortress, founded by Gilbert de Clare, Earl of Pembroke in 1120.[3][4] While this date is generally consistent, although some indicate 1110 or 1113,[5]

Pembrokeshire Records insist that the castle was actually originally built by Tancred the Fleming, and they state that the castle remained in the possession of the Tancred family until 1210.[2]

The original castle is believed to have been first attacked (unsuccessfully) by Gruffydd ap Rhys, Prince of Deheubarth, in 1135 - 1136. In 1173 the castle had its first royal visit by Henry II of England who passed by the town on coming back from his expedition to Ireland. In 1188 Giraldus Cambrensis mentions visiting the castle with Archbishop Baldwin during his progress around Wales preaching for the 3rd Crusade that Richard I the Lion Heart led to the Holy Land.[2][3]

By 1200, many of the original timber buildings had been replaced with the first stone buildings, including a rectangular north eastern tower to serve as the castle's keep.[2] In 1210 King John took the castle from the Tancred family and Robert Fitz Richard, and in 1213 he gave concessions for the extremely wealthy William Marshal, Earl of Pembroke, to run the castle in return for an exorbitant sum of money. Marshal was responsible for replacing most of the original timber walls, towers and gatehouse with stone in the 1210s, and even by 1220 little remained of the original castle.[2] Today all that remains of the 1120 establishment is a large square keep in the north-east corner of the inner ward.[3] This mass reconstruction to strengthen the castle was likely due to the persistent attacks during this period.

In 1217, Llywelyn Fawr, Prince of Wales threatened the Marshal and in 1220 he burned the town but failed to take the castle.[3] Following the burning of the town, it was rebuilt greater than before and developed quickly in the 13th century as a commercial centre due to its position at the centre of Pembrokeshire and its naval links.[2] In 1248, Humphrey II de Bohun acquired the castle and resisted an attack in 1257 by Llywelyn ap Gruffudd, Prince of Gwynedd (Llywelyn the Last).[2]

In 1265, Haverfordwest castle was taken by William de Valence, Earl of Pembroke, during the Barons War, but in 1274 royalty intervened and granted it back to the de Bohun family, to the next generation, Humphrey de Bohun III.[2]

In 1284 King Edward I and Queen Eleanor of Castile visited the castle for the first time during a royal pilgrimage to St Davids. Eleanor was said to be in love with the castle. Four years later she borrowed a huge amount of money in those times to purchase the castle from the de Bohun family and loaned £407 (an extreme amount in those days) to fully rebuild the castle and complete its transition fully into stone.[2] A massive scale reconstruction took place, and it was completed a year later in 1290, shortly before she died, although it long became known as the "Queen's Castle at Haverford".[3] Today much of what remains is dated to Queen Eleanor's 1290 version, including the extensive curtain wall.[3]

The castle remained in Royal possession after Eleanor's death and it was granted out to various wealthy tenants.[2] In the 14th century, the castle was occupied by many owners, amongst them was Edward, the Black Prince, from 1359-67. The castle was owned by the crown from 1381–85, who paid for restoration works of the castle. These works proved important later, as in 1405 the castle was strong enough to fend off an attack during Owain Glyndŵr's rebellion.[3]

The town walls around the high ground near the castle also did much to protect the castle from invaders, although nothing remains of these town walls today. Over the centuries the castle was visited by numerous nobles and monarchs such as King Richard II and Oliver Cromwell.[6] 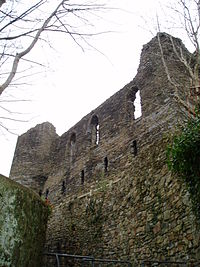 By the 16th century, however, the castle had become dilapidated and subsequently was re-fortified during the Civil War. In 1644 Haverfordwest Castle is documented as being occupied by the Royalists, but they abandoned it on misinterpreting the noises of cows for a Parliamentary army. Although it was recaptured and held for the king for a year, who finally surrendered after the Battle of Colby Moor nearby.[3] Shortly afterwards, in 1648, one wall of the inner ward was slighted and it was abandoned soon after.[4] Oliver Cromwell sent letters to the castle, ordering it to be destroyed in July 1648 and threatened to imprison the townsfolk unless it were demolished.[6][7] These letters were only unearthed in 1986 and are currently on display in the town museum.[6]

The derelict mediæval castle was converted to a prison in 1779, although Giraldus Cambrensis records that part of the castle was used as a prison as early as 1188.[6]

In 1820 a new prison building was erected within the castle grounds, mainly within the inner bailey. It had a capacity for 86 prisoners. In 1878 the remaining inmates were transferred to the gaol in Carmarthen.[8] The building has subsequently been used as a police station and council offices.[8] Today it houses the Pembrokeshire Record Office.[6] A cell door, leg irons, the original lock from the castle gate and numerous artifacts are on display. Today the castle is operated by the Pembrokeshire Coast National Park Authority and is open to the public.[1]

In 2010 there were plans to put the prison building on the market, with new council offices being built in the Prendergast area of Haverfordwest.[8]

In January 2008 an extensive archaeological excavation was conducted at Haverfordwest Castle.[6] 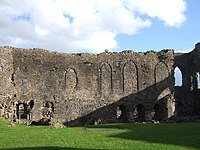 The original entrance to the castle lay on the west side, guarded by a gatehouse but no trace of this survives. Round towers are located on the north-west and south-west corners, and in the south-east corner there is a square tower with an additional projecting turret. The south-west and south-east towers have three storeys, with the south-east tower possessing a basement and postern gate which could serve as a counter-attack during a siege.[3] A large hall lies the south of the castle with great, high windows and scaling ladders. Little remains of the original mediæval defences in the outer ward of the castle, although the extensive curtain wall has been kept in repair and still remains along with a considerable part of the north side, including a semicircular turret and a square tower to the east.[3]