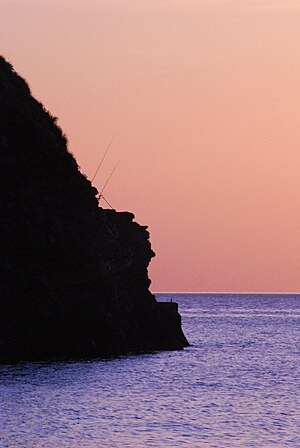 Sunset across the Irish sea

Little Haven is a village at the south-east corner of St Bride's Bay in Pembrokeshire, in the Pembrokeshire Coast National Park. Together with the larger coastal village of Broad Haven to the north, Little Haven falls within The Havens for which the 2001 census recorded a population of 1,328.

The Pembrokeshire Coast Path runs through the village. Since May 2012 this route has also formed a part of the Wales Coast Path. At low tide it is possible to walk north along the sandy shore from Little Haven via a larger bay known as The Settlands, past a second point ('The Rain') to the wider bay at Broad Haven.[1] There is an Anglican church in Little Haven.

Little Haven has been an agricultural, fishing and coal-mining area for some centuries, and a tourist destination since the early 19th century. Coal was loaded on to coasters from the beach, and a Royal National Lifeboat Institution lifeboat was stationed at Little Haven from 1882 to 1921. With the decline of industry in the 20th century its primary focus has been development as a seaside resort.[2] In response to the rise in visitors to the beaches and waters of The Havens, in 1967 the lifeboat station was reopened with an inshore lifeboat and the station name changed to Little and Broad Haven Lifeboat Station.[3]

Little Haven lies at the westernmost edge of the Pembrokeshire Coalfield. The local rocks are assigned to the South Wales Lower and Middle Coal Measures formations. They largely comprise faulted mudstones with thin and contorted coal seams though the cliffs to the north and the south of the bay are formed in sandstones. Woodlands Colliery once worked seams such as the Crane Vein inland of the village. The Howelston Level was also driven into the ground south of the village.[4]An east-west aligned fault runs inland from the bay whilst a series of north-south aligned faults affect the rocks of The Point to its south. The floor of the valley stretching south-westwards from the village is filled by more recent alluvial deposits.[5]