The village has a population of around 200. It has its own voluntary controlled primary school, built in the late nineteenth century, and a pub, The Stackpole Inn, which occupies the former village Post Office, a building of sixteenth-century origin.[1]

In 1735 Stackpole village was moved from its original mediæval site to accommodate the growing Stackpole Estate. Present day Stackpole is considerably larger than it was then. During the 1950s and 1960s, the village expanded with modern homes built at the edge of Deer Park and around the school. The village remains though small and rural, surrounded on all sides by woodland and arable farmland.

Stackpole Eildor otherwise known as Cheriton stands half a mile further up the valley (SR988972). It has the parish church. 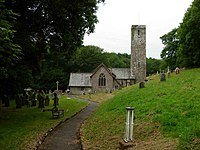 Stackpole Elidor Church in Stackpole Elidor, is dedicated to St James and St Elidyr,[2] and goes back to the thirteenth century. It stands at the bottom of a quiet wooded valley with just three small cottages and the rectory in the immediate vicinity. The layout of the church is in the traditional cruciform shape, aligned east to west, with a chancel and nave flanked by two transepts. The tall, slender tower is undoubtedly the oldest part of the present structure, dating back probably to the thirteenth or late twelfth century. It is of the typical South Pembrokeshire form.

It appears that by 1851 the state of the fabric of the church made a complete restoration essential, although the building had been carefully maintained until only a few years before. Richard Fenton, in his Historical Tour through Pembrokeshire published in 1810, quotes from a letter written by Stephen Davies, Canon of St. Davids Cathedral, to the antiquary Browne Willis:

In 1851 John Frederick Campbell, 1st Earl Cawdor, engaged Sir George Gilbert Scott, the most respected church architect of the day, to direct the work of restoration. He employed a Cardiff builder, WP James, and the work cost a total of £1,804 7s 2½d.

The result, it is generally agreed, is the typical sound, workmanlike building that Scott produced in his renovations, with a typical tall, narrow chancel arch, colourful Minton tiles on the chancel floor and sanctuary walls, and the typical Middle English or Decorated style of tracery in the main windows. The transepts retain their fourteenth century vaulting, and the Lort chapel its rib vaulting. There were originally matching hagioscopes on each side of the chancel arch, though the north squint was later blocked by the organ installed in 1874. In the south transept there is a small piscina, probably of the fourteenth century, which indicates there was probably a side altar there at the time.

Just outside the village there is the Stackpole Outdoor Learning Centre which is a multi-purpose venue run by the National Trust with a theatre, licensed bar and conference facilities. It is immediately adjacent to the Lily Ponds and the Eight-Arch Bridge and occupies a remarkably tranquil part of the estate near Home Farm and less than a mile's walk from Broad Haven South beach.