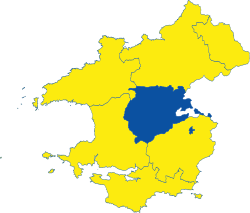 The Hundred of Dungleddy is a hundred in the centre of Pembrokeshire. It is bounded to the east by Carmarthenshire; to the south-east by Narberth Hundred; to the west by Roose Hundred; to the north-west by Dewisland Hundred; and to the north by Cemais Hundred. It had a population of 7,746 in 2011.

The hundred has its origins in the pre-Norman cantref of Deugleddyf.[1] It derives its Welsh-language name from its position between the two branches of the River Cleddau (Cleddyf): the English form is a corruption of the Welsh. The area of the cantref was around 45,700 acres: it was the smallest of the seven cantrefi of Dyfed.

The cantref was allegedly divided into two commotes. The Red Book of Hergest calls these "Castell Hu" (modern Cas-wis or Wiston) and "Llan y Hadein" (Llanhuadain or Llawhaden). These both appear to be post-Norman lordships and are not genuine native subdivisions.[2] The western part of the hundred was English-speaking from the time of the Norman conquest, and formed part of Little England beyond Wales: the eastern part was part of the Lordship of the Bishop of St David's, and George Owen described it as bilingual.[3] The three north-eastern parishes (Llys y Fran, New Moat and Bletherston) were solidly Welsh-speaking during the 20th century.

As their names imply, the civil headquarters of the commotes were at Wiston and Llawhaden, and the latter the cantref's ecclesiastical centre, perhaps the seat of a bishop during the Age of the Saints[4]