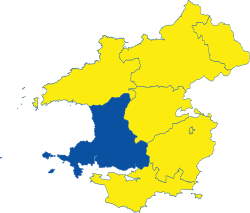 The hundred of Roose in Pembrokeshire

The hundred has its origins in the pre-Norman cantref of Rhos[1] and was formalised as a hundred by the Laws in Wales Act 1535. It derives its Welsh-language name from its position nearly surrounded by water, bounded east by the tidal Western Cleddau, south by Milford Haven harbour and west by St Brides Bay. Rhos locally means (among other things) "promontory".[2] The English form is a corruption of the Welsh. Its area is around 65,800 acres.

The pre-Norman history of the cantref is uncertain, as is the site of its civil headquarters. It had been popularly assumed that the chief town of Haverfordwest does not pre-date the Norman conquest. However archaeological discoveries in Pembrokeshire as early as the 1920s by Sir Mortimer Wheeler at Wolfscastle earlier Iron Age and Roman coinage and artefact discoveries, and recent excavations by the Dyfed Archaeological Trust under the direction of Heather James at Carmarthen (Maridunum) in the 1980s point convincingly to Roman penetration to the westernmost parts of Wales. A Roman road running west of Carmarthen has been identified with the possibility of Roman Fortlets at Whitland and Haverfordwest. The strategic position of Haverfordwest with its defensive bluff overlooking the lowest fordable point on the Western Cleddau accessible to sea traffic suggest a Roman origin probably modest in scale for the town from about AD 96. The ecclesiastical centre (perhaps the seat of a bishop in the Age of the Saints) was probably one of the several churches of the local St Ismael, most probably St Ishmael's.[3]

The hundred, with its capital at Haverfordwest was the original centre of the Norman English "plantation" in the 12th century, and it has been essentially English-speaking since then, forming the core of Little England beyond Wales.

The cantref was said in the post-Norman period to be divided into two or perhaps three commotes. The Red Book of Hergest mentions Haverfordwest commote and Walwyn's Castle commote. The former is an English name, and the "commotes" correspond to the Norman lordships. The northern part of Haverfordwest commote was sometimes distinguished as Roch commote (a French name). None of these is likely to be a real native Welsh subdivision, and the small Cantref of Rhos was probably not actually divided into commotes.[4] The fragmentary Norman lordships[5] are shown in the map.