Amroth is a holiday-resort village, seven miles east of Tenby, Pembrokeshire, noted for its long sandy beach. The parish includes the settlements of Summerhill, Stepaside, Pleasant Valley and Wiseman's Bridge as well as Amroth itself.

The name is from the Welsh language, and probably means "On (the brook called) Rhath".[1]

The beach stretches the whole length of the village and at extreme low tide one can still see the petrified forest, destroyed when sea levels rose 7,000 years ago, while fossilised antlers, nuts, animal bones and Neolithic flints have been discovered.[2] The parish was an important anthracite coal mining area until the end of the 19th century. Slight remains of mines and tramways are still visible. Ruins of Amroth Castle still remain, and one mile inland is the Anglican parish church of St Elidyr, which is a grade II* listed building. [3] 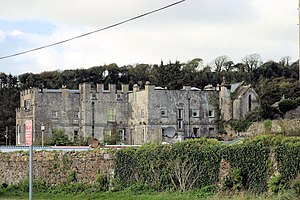 Amroth Castle stands on the north side of the unclassified coast road east of the village of Amroth. It is surrounded by a high wall with an entrance archway at the south-western corner. The present building is a 19th-century country house built in the style of a mock castle which possibly replaced a small stone castle dating from the 12th century. The gatehouse is also much restored. The ruinous remains of the house are a grade I listed building. [4]

After passing through several hands the castle was used as a lunatic asylum in the 1850s. Converted back to a private house in the 1880s it was later owned and occupied by Owen Philipps, the shipping magnate who bought the White Star Line and was created Baron Kylsant of Carmarthen and Amroth in 1923 . [5] It passed to his daughter Nesta, who had married George Coventry, grandson of the 9th Earl of Coventry. They moved out in 1930 when George inherited the Coventry title and estates.