Carew is a village and parish on an inlet of Milford Haven in the hundred of Narberth, Pembrokeshire. It is situated 4½ miles north-east of the county town Pembroke. The eastern part of the parish is included in the Pembrokeshire Coast National Park. 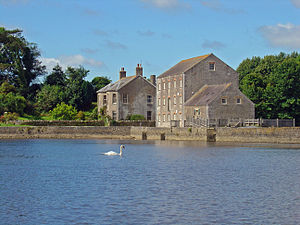 The meaning of the name is disputed.[1] It is Welsh and could mean "fort on a hill" (Caer-rhiw), "fort by yews" (Caer-yw) or simply "forts" (Caerau). It is pronounced /'kε:ru/, or more traditionally /'kε:ri/. The village grew up to serve the nearby Norman castle. The parish includes several other villages and hamlets, including Cheriton (around the parish church), Milton, Newton, West Williamston, Sageston and Whitehill.

Textile mills gave Milton its name. In the 19th century there was a carding mill downstream, a weaving mill by the bridge, and a fulling mill upstream. West Williamston has an almost-disappeared industrial history. Limestone was quarried in the area for centuries. The stone was cut from slot-shaped flooded quarries communicating with the haven, known locally as "docks". These allowed stone to be dropped from the quarry faces directly into barges at the bottom. From there, stone was shipped to lime kilns all around the coast of North Pembrokeshire and Cardiganshire.[2] A small inland quarry still operates just north of Carew village. Besides limestone, anthracite was mined on a small scale for local consumption at Minnis Pit on the north-eastern edge of the parish.

Typical of South Pembrokeshire, the parish has been predominantly English-speaking since the 12th century.