Cowbridge is a market town in Glamorgan, approximately seven miles west of the county town, Cardiff. It is an ancient town, bearing much of its mediæval form, as the town centre is still arranged on its mediæval plan, with one long street divided into "burgage plots". Cowbridge is one of very few mediæval walled towns in Wales, and substantial portions of the walls, together with the south gate, are still standing. 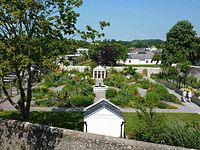 Cowbridge Physic Garden is to be found near the high street, modestly concealed by its high wall. The garden was originally part of the Old Hall Gardens, laid out by the Edmondes family in the 18th century, but later neglected until volunteers restored it in the twentieth century today; it displays a glorious array of medicinal plants and herbs, typical of physic gardens from centuries past.

The site is relatively small, just ½ acre but is laid out in a formal pattern and contains a fascinating variety of species that would traditionally have been used for healing, cooking and dyeing fabrics.

The town lies on the site of a Roman settlement identified by some scholars as the fort of Bovium (ox-place). Recent excavations have revealed extensive Roman settlement;[1] the town lies alongside a Roman road. There are 17th century references to a 'cow-bridge' over a tributary of the river Thaw (which flows through the town) but Cowbridge's Welsh name, Y Bont-faen, means literally 'the stone bridge'.[2]

On 13 March 1254, Cowbridge received its first borough charter from Richard de Clare,[3] the Lord of Glamorgan. Richard de Clare was one of the most powerful Barons of the day, having huge estates stretching across much of Glamorgan and also lands in southern and eastern England.

From 1243 de Clare was actively extending his authority in Glamorgan; in 1245 he seized the manors of Llanblethian and Talyfan from Richard Siward, and the lordships of Miskin and Glynrhondda from Hywel ap Maredudd. In Llanblethian he founded the town of Cowbridge and in Miskin he founded the castle and town of Llantrisant. The largely mediæval church of the Holy Cross was initially a chapel of ease to the parish church at Llanblethian. In 1307 Gilbert de Clare, 7th Earl of Hertford, grandson of Richard de Clare, began work on the stone fortifications of St Quintins Castle in Llanblethian. 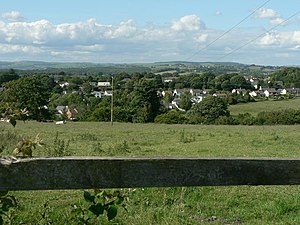 The Battle of Stalling Down was fought near Cowbridge when the large English army of King Henry IV met a combined force of French and Welsh soldiers under Owain Glyndŵr in 1403. 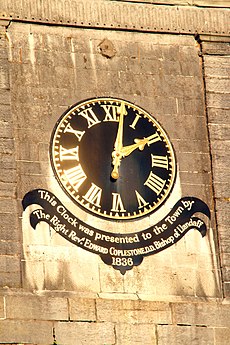 The 18th century antiquary, Iolo Morganwg, inventor of the present-day rituals of the National Eisteddfod of Wales, kept a bookshop in the High Street, the location of which is now marked with a plaque inscribed with the words Y Gwir yn erbyn y Byd ("Truth against the world") in Roman and ogham script. It was just outside the town that he held the first meeting of the Gorsedd, an assembly of bards, in 1795. Cowbridge Grammar School was founded in 1608 and had close links with Jesus College, Oxford through its later benefactor, Dr Leoline Jenkins. Its famous pupils included the poet Alun Lewis and the actor Sir Anthony Hopkins. The old grammar school eventually merged with Cowbridge High School for Girls to became a comprehensive school, and the original buildings, having for some time lain derelict, have been converted into private accommodation.

On the 21 March 1950 a Bristol Freighter (Registration: G-AHJJ) on a test flight took off from Bristol Filton Airport. The aircraft crashed near Cowbridge after a structural failure of the fuselage. It caused the aircraft to enter a spin and crash. The accident killed all four passengers and crew on board.[4] 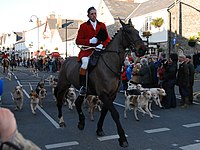 The present town hall, a building dating back perhaps as far as the Elizabethan era, served as a prison until 1830, when it was converted into a town hall to replace the former Guild Hall, demolished at that date. The New Palladian Town Hall was built in 1830 by Isaiah Verity of Ash Hall who in gratitude was made a Freeman of Cowbridge. The money for the reconstruction was raised by public subscription.

Six of the original prison cells are still intact, and house the exhibits of Cowbridge Museum. The remainder of the building is used by the town council and for public events. The museum holds archaeological finds from Cowbridge and district, as well as displays on the later history of the town, including industrial and domestic artefacts, a photographic collection, and a small historical costume collection.

The main street contains a number of Georgian houses, including the former town houses of important local families such as the Edmondes and Carnes. The Carnes' town house is known as Great House, a Grade 2* listed property of Mediæval origin.

Cowbridge contains the following inns: the Bear Hotel, the Horse and Groom, the Edmondes Arms, the Duke of Wellington and the Vale of Glamorgan. The latter is located at the premises of the former Vale of Glamorgan Brewery.

Closely attached to the town of Cowbridge is the village of Aberthin. Aberthin contains two inns; The Hare and Hounds and The Farmers Arms.

Cowbridge also has a leisure centre where can be found various clubs including, tennis, football and badminton. Behind Cowbridge Leisure Centre is Cowbridge Bowling Club and tennis courts.

September 2009 also saw the reintroduction of senior football to Cowbridge Town after a ten-year absence. Starting in the third tier of the Vale of Glamorgan Amateur Football League the team achieved great success in their first season back, achieving an unlikely cup-promotion double.The 2011-12 season saw the club gain their second promotion in three years to reach the premier division.