Llanedeyrn is a district in the east of the city of Cardiff, Glamorgan, located around 3½ miles from the city centre. It lies close to the River Rhymney (the boundary with Monmouthshire).

Llanedeyrn consists of two distinctive areas, divided by the M4-A48 link road. In the east by the river is a quiet church, St Edeyrn, and adjacent to it is a 15th-century public house, The Unicorn. Modern "affordable housing" estates lie to the west.

The parish of Llanedeyrn rests on the banks of the Rhymney and is visible nesting on a hill side above the A48(M), westbound on the approach into Cardiff: a silent witness to steadfast faith to the hurrying traffic on the soulless road.

The name "Llanedeyrn" is believed to be derived from a sixth century monk and saint named St Edeyrn. During the sixth century, St. Edeyrn and a fellow monk, St Isan, were given the task of spreading the faith and establishing places of worship. The first location chosen by the two monks was Llanishen ("Islan's church") and the other Llanedeyrn ("Edeyrn's church").

St Edeyrn was reputed to have travelled widely and as a result there are churches in North and South Wales dedicated to his memory. St Edeyrn gathered together a community of about 300 who lived and worshipped in the Llanederyn area.

The original Norman style church dating back to 1123 exists only as stonework remnants beneath restoration work completed in 1888, the church today is a simple structure featuring a tower and five bells

Nearby in Pen-y-Groes a Calvanistic Methodist school room and chapel was erected in 1840. 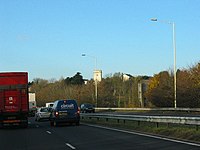 In the late 1960s, Cardiff Council decided to create low cost social housing in Llanederyn, with an estimated 3,500 homes to be erected for 12,000 less well off people (2000 homes owned by the city council and 1500 private homes). The first of the estates within the area was opened in 1968. Cardiff Council provided a selection of prefabricated and terraced houses and numerous 2, 3 and multi-storied flats were constructed.

Due to demand, a part-time police station was set up in Llanedeyrn and in 1974 the Maelfa shopping centre was built, followed shortly in 1975 by the Retreat public house adjacent to it. The public house The Pennsylvania closed down due to issues but happily reopened as the New Penn.