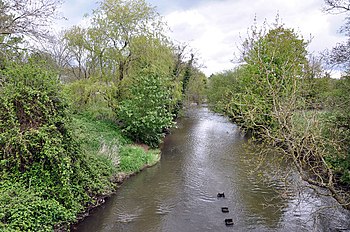 The River Ely is a river 24 miles long in Glamorgan, reaching the sea at Cardiff. It rises in the flowing hills near Tonyrefail, and flows to Cardiff generally on a south-easterly course.

The River Ely running through Cardiff

The Ely flows through Tonyrefail, and then through the grounds of the Royal Glamorgan Hospital at Ynysmaerdy, following the main A4119 (Tonypandy to Cardiff Bay route through the valley pass formed between Mynydd Garthmaetwg (Llantrisant Forest), to the west and Llantrisant, to the east. Flowing through Talbot Green, the Ely is joined by the Afon Clun at Pontyclun, before heading east to Miskin. Although numerous smaller streams join the river, the Clun is its only large tributary.

The Ely turns southeasterly reaching the Vale of Glamorgan and wending its way alongside the rural South Wales Main Line immediately south of Miskin and being traversed by the M4 motorway it flows through farmland which as part of the flood plain the South Wales Railway used to engineer genteel gradients under Isambard Kingdom Brunel. It passes the Museum of Welsh Life at St Fagans and then begins to enter the suburbs of Cardiff, flowing through the city’s residential areas, through such suburbs such as Pentrebane and Caerau and Ely before flowing under the Vale of Glamorgan Line and into Cardiff Bay, by Penarth Marina.

Despite it being close to these densely populated settlements, major roads like the M4 motorway, and the busy South Wales Main Line and being traversed by the Vale of Glamorgan Line, it still retains a rural feel. 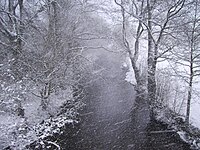 The Ely at the Royal Glamorgan Hospital

The Ely has had a long history of moderate to severe pollution from which it is now recovering. Prior to the 1980s it had received large volumes of poorly treated or untreated sewage from the urban areas in the valleys. Even after the construction of sewage treatment works at Miskin and Rhiwsaeson, the quality of the effluent continued to cause pollution until the late 1980s.

These problems were exacerbated by the highly polluting discharge from Coedely coke ovens. At the mouth of the river, the effluent a large paper mill rendered large parts of the estuary anoxic for most of the tidal cycle preventing the passage of migratory fish. The recovery of the river since that time owes much to the regulatory effort of the National Rivers Authority, and more lately the Environment Agency Wales, and to the massive capital investment made by Dŵr Cymru / Welsh Water.

As the pollution of the river abated, so fish populations slowly returned to the river from the many small tributaries. Roach, brown trout, perch, chub, eels, grayling, sea trout and salmon and more recently some barbel.

The Countryside Council for Wales and Cardiff Council are developing a cycleway beside the river known as the Ely Trail. The intended benefits are to allow people from urban western Cardiff easier access to the countryside, and for people in rural areas to have another commuting option into the city centre. Parts of this trail are now open.