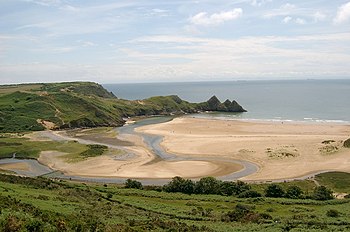 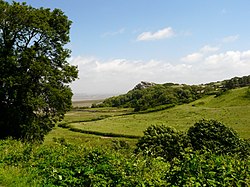 Gower or the Gower Peninsula (Welsh: Gwyr) is a peninsula forming the westernmost extension of Glamorgan. It juts from the coast into the Bristol Channel, and in contrast to the industrial and urban nature of much of the county, it is a wild, open place. In 1956 Gower became the first area in Britain to be designated an Area of Outstanding Natural Beauty.

About 70 square miles in area, Gower is known for its coastline, popular with walkers and outdoor enthusiasts, especially surfers. Gower has many caves, including Paviland Cave and Minchin Hole Cave.

The peninsula is bounded by the Loughor Estuary to the north and Swansea Bay to the east. Gower Area of Outstanding Natural Beauty covers 73 square miles, including most of the peninsula west of Crofty, Three Crosses, Upper Killay, Blackpill and Bishopston. The highest point of Gower is The Beacon at Rhossili Down at 633 feet overlooking Rhossili Bay.[1]

The interior of Gower consists mainly of farmland and common land. The population resides mainly in villages and small communities, though suburban development has made a number of communities in eastern Gower part of the Swansea Urban Area. 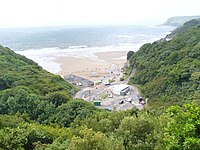 The southern coast consists of a series of small, rocky or sandy bays, such as Langland and Three Cliffs, and larger beaches such as Port Eynon, Rhossili and Oxwich Bay. The north of the peninsula has fewer beaches, and here are the cockle-beds of Penclawdd. 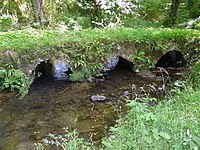 Several important archaeological discoveries have been made on the Gower. In 1823 Victorian-era archaeologists discovered a fairly complete Upper Paleolithic-era human male skeleton in Paviland Cave. They named their find the Red Lady of Paviland because the skeleton is dyed in red ochre, though later investigators determined it was actually a male. This was the first human fossil to have been found anywhere in the world, and is still the oldest ceremonial burial anywhere in Western Europe so far discovered. The most recent re-calibrated radiocarbon dating in 2009 indicates that the skeleton can be dated to around 33,000 Before Present. In 1937 the Parc Cwm long cairn was identified as a Severn-Cotswold type of chambered long barrow. Also known as Parc le Breos burial chamber, it is a partly restored Neolithic chambered tomb. The megalithic burial chamber, or "cromlech", was built around 6,000 BP. In the 1950s, Cambridge University excavating in a cave on the peninsula found 300-400 pieces of flint related to toolmaking, and dated it to between 12,000-14,000 BC. In 2010 an instructor from Bristol University, exploring caves in the same area, discovered a rock drawing of a red deer from the same period – which may be the oldest cave art found in Great Britain.[3]

On Gower stand several menhirs or standing stones from the Bronze Age. Of the nine stones, eight remain today. One of the most notable of the stones is Arthur's stone near Cefn Bryn. Its twenty-five ton capstone was most likely a glacial erratic (a piece of rock/conglomerate carried by glacial ice some distance from the rock outcrop from which it came), which the builders dug beneath and supported with upright stones to create a burial chamber. The remains of Sweyne Howes on Rhossili Down, Penmaen Burrows Tomb (Pen-y-Crug) and Nicholaston Long Cairn are three other well-known Neolithic chambered tombs.

During the Bronze Age, people continued to use local caves as a source of shelter and for burying their dead. Bronze Age evidence, such as funeral urns, pottery and human remains have been found in Tooth Cave at Llethryd, Culver Hole (Llangennith) and Cat Hole Cave. With the transition into the Iron Age, hill forts (timber fortifications on hill tops and coastal promontories) and earthworks began to appear. The largest example of this type of Iron Age settlement on the Gower Peninsula is Cilifor Top near Llanrhidian.

Roman occupation brought new settlement. The Romans built Leucarum, a rectangular or trapezoidal fort at the mouth of the River Loughor in the late 1st century to house a regiment of Roman auxiliary troops. Its remains are located beneath the town of Loughor. Stone defences were added to the earthen ditch and rampart by 110 and the fort was occupied until the middle or end of that century. However, it was later abandoned for a time and in the early 3rd century the ditch naturally silted up. It appears to have been brought back into use during the rule of Carausius who was worried about Irish raids, but was abandoned again before the 4th century. A Norman castle was later built on the site.

After the coming of the Normans, the commote of Gwyr passed into Norman control and its southern part soon became English-speaking. In 1215 a local lord, Rhys Gryg of Deheubarth claimed control of the peninsula, but in 1220 he ceded control to the Anglo-French lords, perhaps on the orders of his overlord, Llywelyn ap Iorwerth. Thereafter Gower remained beyond the reach of the Welsh Princes, but its population suffered at the hands of Rhys ap Maredudd during his revolt of 1287-8.

In 1535 the Laws in Wales Act made the Gower Lordship part of Glamorgan, and its south-western section became the Hundred of Swansea. 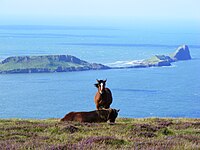 Horses grazing, with the Worms Head behind

Agriculture remains important to the area, but tourism plays an increasing role in the local economy. The peninsula has a Championship status golf course at Fairwood Park just off Fairwood Common.

Gower is part of the Swansea Travel to Work Area.

Sights of the Gower

There are six castles on the Gower Peninsula: 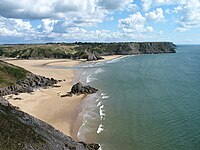 The Llethryd Tooth Cave, or Tooth Hole cave, is a Bronze Age ossuary site in a limestone cave, about 1,500 yards north of the Parc Cwm long cairn cromlech, on private land along the Parc Cwm valley, near the village of Llethryd. The cave was rediscovered by cavers in 1961, who found human bones.

An excavation was carried out by D.P. Webley & J. Harvey in 1962 revealing the disarticulated remains (which is to say not complete skeletons) of six adults and two children, dated to the Early Bronze Age or Beaker culture. Other finds are now held at the National Museum Cardiff: Early Bronze Age, or Beaker, collared urn pottery; flaked knives; a scraper; flint flakes; a bone spatula; a needle & bead; and animal bones – the remains of domesticated animals, cat and dog. Archaeologists Alasdair Whittle and Michael Wysocki note that this period of occupation may be "significant", with respect to Parc Cwm long cairn, as it is "broadly contemporary with the secondary use of the tomb". In their article published in The Proceedings of the Prehistoric Society (vol.64 (1998), pp. 139–82) Whittle and Wysocki suggest corpses may have been placed in caves near the cromlech until they decomposed, when the bones were moved to the tomb – a process known as excarnation.[6][7][8][9][10]

At nearly a mile long, the Tooth Cave is the longest cave in Gower. It has tight and flooded sections, and so is kept locked for safety.[11][12]

The village of Mumbles set the scene for a six part drama Ennals Point. The series focused on the local lifeboat crew and first aired in January 1982. To those living locally, the continuity leaps were often amusing — departing a house in the village the actors would find themselves immediately in an area 6 miles distant.

A film, Gower Boy, made by artist Gee Vaucher and musician Huw Warren, described as a "gentle, contemplative exploration of the Gower Peninsula in Wales", debuted at the 14th Raindance Film Festival in October 2006 [1].

The village of Rhossili appeared as a location in the 2006 Doctor Who episode "New Earth". In the episode, Worm's Head could be seen.