Barry is a seaside town in Glamorgan; both a holiday resort and an industrial town. It stands on the northern coast of the Bristol Channel, under 7 miles west of the county town, Cardiff.

As a seaside resort, Barry has attractions which include several beaches and the Barry Island Pleasure Park. Once a small village, Barry has absorbed its larger neighbouring villages of Cadoxton and Barry Island. 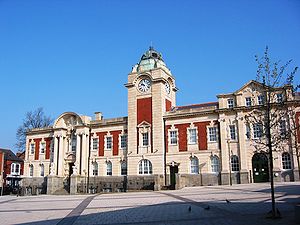 Barry Council Office and Library in the town centre

Barry is currently home to some 50,000 people. It is best known nationally as a seaside holiday resort, specifically as to Barry Island, which is no longer an island, where there is a fine beach and pleasure park.

The town is often associated with Woodham Brothers scrapyard, a business that helped over 200 historic steam locomotives survive into preservation.

Barry grew from a village to a large town with its industrial docks, and a port it is still. Now though Barry is more of a manufacturing town and as a service centre for the central Glamorgan. Barry Docks and the adjoining industrial area form the largest employment centre in the town. The docks, whose road links were dramatically improved with the opening of the Docks Link Road in 1981, now have direct road access with the M4 motorway. The docks can handle vessels up to 23,000 tons and the first-class tidal position close to the deep-water channel of the Severn Estuary, allows for regular scheduled sailings. With its extensive transit sheds, warehouses and open storage, the docks are well equipped to handle bulk cargoes for which the batteries of high capacity grab cranes are invaluable. Two roll on/roll off berths are available and have been extensively used by routes to Ireland and West Africa. These and the other port facilities have seen an increasing variety of traffic in recent years. 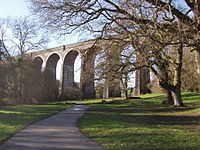 The rail viaduct at Porthkerry Park

The great majority of industrial firms are located in the dock area. By far the largest are the chemical producing concerns such as Cabot Carbon and Dow Corning who have just completed the development of the largest silicones plant in Europe. Other main employers in Barry Docks are Jewson Builders' Merchants, Western Welding and Engineering, Bumnelly, Rank Hovis and, of course, Associated British Ports Holdings who, since 1982 have run the docks as successors of the British Transport Docks Board.

To the west of Barry is Porthkerry Park. This is a large area of open space, with woodlands, streams, a few modern attractions and access to a pebbly beach. In the park is the Barry Railway Company viaduct with 13 arched spans standing 110 feet high. The Barry Railway reopened in September 2006 and provides a scenic view and link to towns such as Llantwit Major.

Mesolithic flint microliths have been unearthed at Friars Point on Barry Island and near Wenvoe[1] and Neolithic polished stone axe-heads at St Andrews Major.[2] A cinerary urn (pottery urn buried with cremation ashes) was found on Barry Island during excavations of Bronze Age barrows[3][4] and two more in a barrow at Cold Knap Point.[5] A large defended enclosure or Iron Age promontory hillfort was located at the Bulwarks at Porthkerry[6] and there was evidence of the existence of an early Iron Age farmstead during construction of Barry College off Colcot Road.[7]

In Roman times, farmsteads existed on the site of Barry Castle and Biglis and there were verbal reports of discovery of a cemetery including lead coffins with scallop-shell decoration. Both St Baruc's Chapel and St Nicholas Church have re-used Roman bricks and tiles incorpoarated in their building fabric[8] and a Roman villa was discovered in Llandough.[9] In 1980 a Roman building consisting of 22 rooms and cellars in four ranges around a central courtyard was excavated at Glan-y-môr and is believed to be a third century building associated with naval activity, maybe a supply depot.[10]

The Vikings launched raids in the area and Barry Island was known to be a raider base in 1087.[11] The excavation of the Glan-y-môr site revealed the site had been reused in the 6th and 7th century and also between AD 830 and 950 as a dry stone sub-rectangular building with a turf or thatched roof.[8] 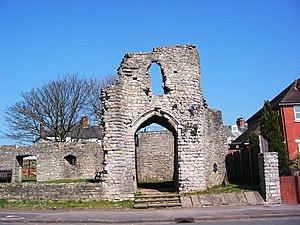 The seaborne Norsemen were replaced by their cousins, the mounted Normans, who came to Glamorgan soon after conquering England. The main feature of the area at this time was Barry Island, then an isle in the Bristol Channel, separated from the mainland by a tidal estuary. It is described by Gerald of Wales in 1191 in Itinerarium Cambriae ("Journey through Wales"), who states that Barry derives its name from St Baruc whose remains are deposited in a chapel on the island.

The local noble family who owned the island and the adjoining estates took the name of de Barri from the island.[12] 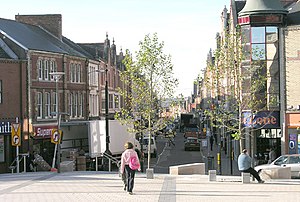 The castle was a small fortified manor house, built to replace an earlier earthwork. By the late 13th century the castle had two stone buildings on the east and west sides of a courtyard. Early in the 14th century the castle was strengthened by the addition of a large hall and gatehouse on its south side, the ruins of which are all that survive today.[15] By now Barry had grown into a village and port with its own church and watermill but in the 14th century its population was drastically reduced by the Black Death and the consequences of the rebellion of Owain Glyndŵr.[16] It took the population some 300 years to recover and once more hold the title of village, essentially a sparsely populated area with a few scattered farms and much of the land a marsh that a small river flowed through.[17] By 1622 the pattern of fields, where enclosure was almost complete, around Barry village was pretty much as it was to remain until the growth of the modern town. According to the 1673 Hearth-Tax list, the parish contained thirteen houses.

Porthkerry Park with view of the Porthkerry viaduct 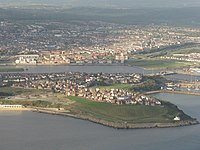 By 1871 the population of Barry was over a hundred. There were 21 buildings, the new estate-owning Romilly family being involved in the build up of the village, but it remained a largely agricultural community.[8][18]

Barry grew when it was developed as a coal port in the 1880s. The coal trade out of Cardiff was growing faster than the facilities at Tiger Bay ever could and so a group of colliery owners formed the Barry Railway Company to build the docks at Barry. Barry docks had the advantage of being accessible in all tides, and David Davies of Llandinam, one of the promotors, claimed that his venture would cause "grass to grow in the streets of Cardiff". Work began in 1884 and the first dock basin was opened in 1889 to be followed by two other docks and extensive port installations.

The Barry Railway brought coal down from the South Wales Valleys to the new docks whose trade grew from one million tons in the first year, to over nine million tons by 1903. From 1901 coal exports from Barry surpassed those from Cardiff. The port was crowded with ships and had flourishing ship repair yards, cold stores, flour mills and an ice factory. By 1913, Barry was the largest coal exporting port in the world.

Barry Docks from the air

Behind the docks rose the terraced houses of Barry which, with Cadoxton, soon formed a sizeable town. The railways which had played a major part in the development of the dock did a great deal, too, to make Barry Island a popular resort.

As the age of steam ended, replaced on the rails by diesel and electric power, the marshalling yards at Barry Docks became Britain's largest repository of steam engines awaiting scrapping. Eventually a significant proportion of the engines stored at the Woodham Brothers yard were saved by rail preservation organisations, although many were vandalised or looted by souvenir hunters.

During its industrial peak, many ships sank off the Barry coast.

The Barry Island is now a peninsula. It was an island until the 1880s when it was linked to the mainland as the town of Barry expanded. This was partly due to the opening of Barry Dock by the Barry Railway Company. Established by David Davies, the docks now link up the gap which used to form Barry Island.

There is a railway station still to access the island at Barry Docks, there is also a heritage railway station which still homes original refurbished steam passenger trains. The railway is always open to the public and annually holds events involving a large steam engine replica of Thomas the Tank Engine.

Barry Island is now known for its beach and Barry Island Pleasure Park. From 1966, the island was home to a Butlins Holiday camp, which was closed in 1987 and taken over by Majestic Holidays who renamed it Barry Island Resort. Between Butlins' closure and Majestic's reopening the camp was used as for filming scenes in the "Shangri-La" holiday camp from the Doctor Who serial Delta and the Bannermen.

The camp closed in 1996 after Majestic had a disagreement with the local council, who refused an entertainments licence unless work were carried out to improve the now 30-year-old site. It was redeveloped for housing between 1997–2003 with the remaining two camp buildings and outdoor pool demolished in early 2005. 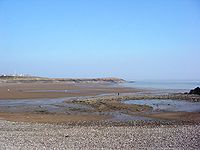 The preserved Vale of Glamorgan Railway runs on Barry Island. From the late 1960s onwards, Woodhams Yard, Barry was home to hundreds of British Rail steam locomotives that were due to be scrapped. Many were sold to preservation societies. By the late 1980s, two thirds had been saved for preservation.