Tongwynlais is a village in Glamorgan, lying to the north of Cardiff, separated from the city's outgrowth by field and more pointedly by the M4 motorway and the vast gyratory system at its Junction 32. The village is in the Taff Valley, the village separated from the river by the A470, and at its back is the mountain. Tongwynlais is best known for Castell Coch, the great Victorian fantasy castle on the mountain slope above the village and dominating the view for many miles around.

Tongwynlais lies in the River Taff Valley. Its population was 1,946 at the 2001 census. It is found 5 miles north of Cardiff city centre and 7 miles south of Pontypridd. The surrounding towns and villages are Pentyrch and Radyr to the west, Taffs Well and Caerphilly to the north, and Rhiwbina and Whitchurch to the south

Many consider Tongwynlais as the entrance to the South Wales Valleys from Cardiff, with its famous landmark, Castell Coch, on the hillside. The main route to the Valleys, and beyond to Mid Wales, the A470, runs alongside the village. The village is surrounded by a large forest called Forest Fawr which is run by the Forestry Commission. Tongwynlais is separated from the rest of Cardiff by the M4 and the A470 to the south and west and hills and forestry to the east. Tongwynlais is considered to be part of the Cardiff North Rural Area.

Tongwynlais is located near Junction 32 of the M4 motorway, west to Bridgend and east to Newport, and the A470 trunk road, south to Cardiff and north to Pontypridd.

The Taff Trail cycle route passes through the village,[1] and it is a popular resting point between sections. 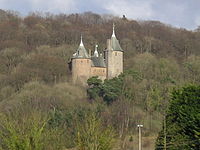 Tongwynlais' most notable building is the Victorian era folly castle called Castell Coch ("Red Castle")' which is now owned by Cadw and open to the public.

The original Castell Coch stood on this spot, a castle built for Gilbert 'the Red' de Clare in the 13th century, though others assert it was a castle of Ifor Bach, a local Welsh ruler.[2][3] The castle fell into ruin and by the eighteenth century its romantic ruins were a popular picknicking spot for families travelling up from Cardiff.

The land belonged the estates of the Marquesses of Bute, who built modern Cardiff. In the late 1870s the Third Marquess of Bute took the castle in hand and by the design of his architect, William Burges, a new castle was built on the ruins of the old, the first attempt in modern times to rebuild a mediaeval castle. Rather than attempt a scholarly reconstruction, the resultant Castell Coch was a Victorian fantasy castle, with conical turrets more at home on a French chateau or a Scots baronial tower, and inside the decoration was to the Marquess's extravagant mediaevalist taste, as seen also in his and Burges's work at Cardiff Castle.