Port Talbot is a coastal, industrial town in Glamorgan. 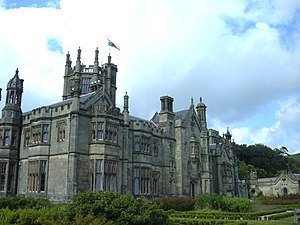 Port Talbot stands on the eastern rim of Swansea Bay in a narrow strip of coastal plane surrounding the River Afan Estuary. Swansea is visible on the opposite side of Swansea Bay. The local beach along the edge of the bay is known as Aberavon Sands which is situated between the River Afan and the River Neath. The other beach in Port Talbot is Margam Sands (or more popularly known as Morfa Beach). The northeastern edge of the town is marked by the River Neath. The most significant landmark in the town is the Port Talbot Steelworks.

One Port Talbot was well known for the sulphurous stench which hung over the town and its surroundings, all from the heavy industry here. Air quality although poor in the past in the Port Talbot Air Quality Management Area has now greatly improved but is closely monitored.[1]

Port Talbot grew out of the original small port and market town of Aberavon, which belonged to the mediæval Lords of Afan. The area of the parish of Margam lying on the west bank of the lower Afan became industrialised following the establishment of a copperworks in 1770. A dock was opened in 1839 and named for the Talbot family;[2] local landowners. (The pioneer of photography, William Henry Fox Talbot, was of this family.) The Talbots were patrons of Margam Abbey, an ancient Cistercian foundation, and also built Margam Castle. Christopher Rice Mansel Talbot (1803–1890) (Liberal Member of Parliament for Glamorganshire from 1830 until his death) saw the potential of his property as a site for an extensive ironworks, which opened in early 1831.

Christopher Talbot's daughter Emily Charlotte Talbot (1840–1918) inherited her father's fortune and became just as notable in the development of ports and railways. With assistance from engineers Charles Meik and Patrick Meik, she set about creating a port and railway system to attract business away from Cardiff and Swansea. The Port Talbot Railway and Docks Company opened a dock at Port Talbot and the Llyfni Railway in 1897, followed by the Ogmore Valley Extension and the South Wales Mineral Junction Railway (almost all these lines were closed as part of the Beeching Axe cuts in the mid 1960s, but some bridges and viaducts remain and many of these railway routes have re-emerged as recreational cycle tracks). By 1900, the dock was exporting over 500,000 tons of coal; it reached a peak of over three million tons in 1923. In the same year, the borough of Port Talbot was created, incorporating Margam, Cwmafan and the older town of Aberavon.[2]

In 1952 the completion of the Abbey Works gave Port Talbot one of Europe's largest steelworks and (with 18,000 employees) the largest employer in Wales. This was followed by the establishment of a chemical plant at Baglan Bay by British Petroleum in the 1960s. In 1970 a new deep-water harbour was opened by Queen Elizabeth II and the Duke of Edinburgh, capable of discharging iron ore vessels of 100,000 deadweight,[3] a tenfold improvement on the old dock. By the early 21st century, due to further modification and dredging, the harbour is capable of harbouring vessels of over 170,000 deadweight.[4]

The South Wales Miners' Museum is located in Cynonville, Cymmer.

Port Talbot Historical Society is a society founded in 1954 and based in Sandfields Library, in the area of Sandfields.

The group is dedicated to the research and recording of local history and have published a number of books over the years. There is a core of 10 -15 active members who will be engaged in the Community Archives Wales project aiming to archive this information digitally.

In 2005 the area was granted its first radio station when Afan FM, the inspiration of a group of local young people headed by 19-year-old Craig Williams was awarded a 5-year licence by Ofcom to serve Port Talbot and its neighbouring town of Neath. Afan FM currently transmits to the area on 107.9FM and online by way of its website. The station was previously based at a publicly-funded state of the art broadcasting centre housed within the AquaDome Leisure Complex on Aberavon Seafront but has sinced moved to Aberafan House, an office complex adjacent to the town's shopping centre as a result of a large-scale fire that engulfed the AquaDome in December 2009. The station also transmits to the neighbouring town of Neath on 97.4FM.

The area is also served by The Wave (96.4FM), Swansea Sound (1170MW), Bay Radio (102.1FM), Real Radio (106.0FM) and Nation Radio (107.3FM), all of which are available on DAB. Radio Phoenix also operates a hospital radio service for the patients & staff of Neath Port Talbot Hospital in Baglan Moors.

The town is served by several newspapers. The Port Talbot Guardian was a weekly paper published by Media Wales, part of the Trinity Mirror group, but ceased publication in October 2009. The Swansea-based daily South Wales Evening Post and the weekly Courier and Tribune are also distributed in the town and are published by South West Wales Publications, part of the Northcliffe Media group.

Port Talbot is served by the South Wales Main Line at Port Talbot Parkway railway station where there are local as well as direct intercity trains to Swansea, Cardiff, London and Manchester.

The M4 motorway cuts through the town from southeast to northwest, crossing a central area on a concrete viaduct, junctions 38 to 41 serve Port Talbot, with junctions 40 and 41 being in the commercial heart of the town. This busy urban stretch of the M4, with tight bends, 2-lane carriageways, short narrow slip roads and concrete walls on both sides, was the first length of motorway in Wales when it opened to traffic in 1966.[5] The stretch through Port Talbot town centre is a particular traffic congestion blackspot and there have been calls to close the slip roads at junctions 40 and 41 to improve traffic flow.[6] However some commuters oppose this plan since it would add more time to their journey.

A new dual carriageway relief road, the Port Talbot Peripheral Distribution Road,[7] is planned for completion in 2012. The new carriageway will serve as a distributor road to the southwest of Port Talbot, beginning at M4 Junction 38 ending near Junction 41.

The Port Talbot Docks complex consists of an inner set of floating docks and an outer tidal basin. Construction of the tidal basin began in 1964 and the whole basin covers about 500 acres.[8] The tidal basin is capable of handling ships of up to 170,000 dwt and is used mostly for the import of iron ore and coal for use by nearby Port Talbot Steelworks. The inner floating docks were constructed in 1898[9] and were closed in 1959. They were re-opened in 1998 for commercial shipping but in March 2007 for the import of some steel products [10] and are capable of handling ships of up to 8,000 dwt.[11] There have been proposals for the development of an intermodal freight terminal at the port.

Heavy industry is a visible feature of Port Talbot's economy. The coastal strip of the town features Port Talbot Steelworks, a large BOC Industrial Gases plant and a gas-fired power station. Three further power plants are being planned or commissioned, they are at Margam adjacent to the BOC plant, near the Aberavon Beach sea front and a recently announced £60m project within Corus to utilise by-product gases.

On 20 November 2007, the Department for Business, Enterprise and Regulatory Reform (BERR) granted consent for the world's largest biomass power station to be built at Port Talbot.[12] This is expected to begin operation in 2010, and to provide enough electricity (from wood from environmentally-managed forests, mostly in North America) to supply half the homes in Wales with electricity.

Potential future development currently centres around the peripheral distributor road to the south, Baglan Industrial Park and Baglan Energy Park to the west, Port Talbot Docks to the southwest, Margam Country Park to the east and the Afan Valley to the north. In March 2009 a regeneration project was announced for Port Talbot town centre and docks, with a masterplan for new homes, offices, light industry, retail developments and improvements to the railway station.[13]

Port Talbot coastguard celebrated its centenary in 2008 with a proud history of rescues in the last 100 years. The crew are now the mud rescue team for the Swansea Bay area.

2007 was a typically busy year with a beached whale making world news. They also took part in flood relief efforts in Gloucester and while all are volunteers, they spent Christmas morning responding to pagers after it was thought a whale had come ashore once more which turned out to be a log, much to everyone's relief.