Llantwit Major is a small coastal town in Glamorgan, lapped by the waters of the Bristol Channel.

The name of the village is Anglicised from the Welsh Llanilltud, meaning Church of Illtud,[1] for this was where the 5th century Saint Illtud founded a monastic community which was famed for the men who flocked there to study initially under Illtud himself, many of whom have been reputed as saints themselves in the "Age of Saints" in the 5th and 6th centuries, between the age when Britain was a land of the native British and the great transformation when the English tribes overwhelmed the greater part of the island. 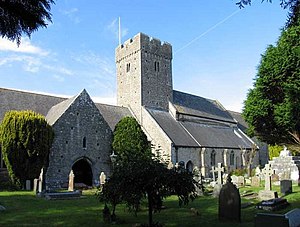 The parish church in the Church in Wales is St Illtud's. The present church on the site largely dates from the 13th and 15th centuries and contains interesting mediæval wall paintings and a fine reredos. There are also a number of important early Christian sculptured stones, three with inscriptions. One is the memorial to King Rhys ap Arthfael of Morgannwg who died in the mid-9th century. Another may date from Saint Samson's time. St Illtyd's church thus predates the Age of the Saints in early Welsh Christianity and thus by its very existence provides evidence of continuity with sub-Roman Christianity.

The town of Llantwit Major grew up around a monastery founded in the 5th century by Saint Illtud as a centre of learning. David, Samson of Dol, Paul Aurelian, Gildas, Tudwal, Baglan and King Maelgwn Gwynedd are said to have studied at the Cor Tewdws, the divinity school. It has often been called "the oldest university in the world".

One of Illtud's disciples was Gildas ("Gildas the Wise") whose work De Excidio et Conquestu Britanniae ("On the ruin and conquest of Britain") is the only reliable contemporary description of Britain in the early sixth century, as it stood on the uncertain brink between the Britons and the incoming English tribes after the Battle of Mons Badonicus. Gildas also wrote a scathing description of the practices and teachings of his contemporary, a fearsome monastic cult leader who is known to history as St David. It was at the monastic community in Llantwit Major that Gildas studied under Illtud. 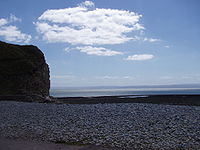 The Bristol Channel from the beach

Notable buildings in the parish include a Roman villa at Caermead which remains as faint earthworks in a field, the 13th century parish church of St Illtud and a 15th-century town hall.

Llantwit once had a mint, and the place where it stood is now an attractive 15th century public house, called the Old Swan Inn, in the centre of the town. Also, at Hill Head, near St Illtud's Church, lies a 13th-century dovecote next to the site of the old tythe barn built for the monks at the, once St Illtud's monastery. Another site on Hill Head is the (13th century) gatehouse, now belonging to St Illtyd's Church, Llantwit Major. There is a plaque on the gatehouse, telling of its history. Historians have recently suggested that this plaque may have been erected after a grain-related incident involving local peasant Benjamin Kirkham that later resulted in his expulsion from the town. These plaques also appear on many other buildings in the town which hold historical significance.

Llantwit Major has three primary schools and a secondary school, six pubs and four restaurants in the town. Of the pubs, three virtually surround the town's War Memorial, being in plain view of each other.

Llantwit Major railway station on the Vale of Glamorgan Line was re-opened in June 2005.

The town is fictionally portrayed in the late Glyn Daniel's novel 'Welcome Death' (1954).

Some areas of the town have been used in the recording of the recent series of Doctor Who [2] and The Sarah Jane Adventures (created by BBC Wales). The local tearooms were used in the 2007 filming of Y Pris filmed by and shown on S4C. 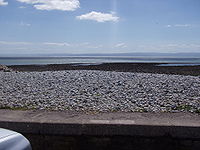