Pencoed is a small town in Glamorgan, mid-way between the county's two great cities; Cardiff and Swansea. Pencoed stands on the Ewenny River and it has a population of around 11,000.

The earliest evidence of habitation in the community area is the Ogof y Pebyll Bone Cave (SS951807). The cave is a Scheduled Monument and appears to have been lived in during Neolithic or Bronze Age periods. Worked flint flakes have been found, along with the teeth of numerous mammals, of many different species.[1] It is believed that there was a Norman castle in what is now the town.

Pencoed as a town did not develop until the late nineteenth century, around the coal mining industry. The coal mines have now closed.

The town nestles in the Ewenny valley, straddling the M4 motorway at junction 35. About a mile to the north of the town, lies the upland relief of the Valleys. To the south lies the rolling countryside of the Vale of Glamorgan and the rugged north coast of the Bristol Channel.

The town consists of three distinct areas, which were once four small hamlets. To the north is Penprysg ('end of the brush wood'), a hilly region backing on to the low ridge (300 feet) of Cefn Hirgoed ('long wooded ridge'). To the west is Hendre ('old town') which rises from the railway line in the centre of the town to the common land at Ystadwaun ('flat moorland'). The central part of the town, which lies on the flat valley floor east of the railway, consists of Pencoed itself and Felindre (Mill Town). There are numerous streams rising and running through the town and two main rivers the Ewenny Fawr (the Big Ewenny) and the Ewenny Fach (the Small Ewenny). At the centre of the town, close to Pencoed railway station, is the war memorial (known locally as the Monument), the shopping centre and the local Community Hall (Pencoed Miners' Welfare Hall). The town is well provided with sports facilities, schools, pubs and clubs. A new development 'Earlswood Parc' was announced in 2002 and now has been completed, incorporating various 'Westbury' built homes and Bocam business park.

The name of Pencoed is from the Welsh language and means "Head [or end] of the Wood".

Pencoed hosted the National Eisteddfod in 1998. 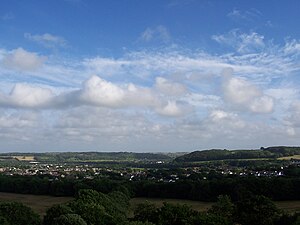