Llandaff Cathedral is the cathedral of the Diocese of Llandaff in the Church in Wales, and the seat of the Bishop of Llandaff. It stands in and dominates Llandaff, a town which is now a suburb of Cardiff in Glamorgan.

The current building was built in the 12th century over the site of an earlier church. It is dedicated to Saint Peter and Saint Paul, and also to three Welsh saints: Dubricius (Dyfrig), Teilo and Oudoceus (Euddogwy). 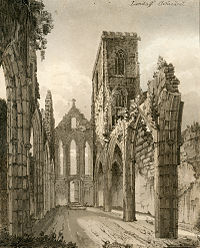 The nave of the ruined Llandaff Cathedral

Llandaff Cathedral was built on the site of an existing church. According to tradition, the community was established by Saint Dubricius at a ford on the River Taff and the first church was founded by Dubricius' successor, Saint Teilo.[1] These two are regarded as the cathedral's patron saints, along with their successor Oudoceus.[1] The original church is no longer extant, but a standing Celtic cross testifies to the presence of Christian worship at the site in pre-Norman times.

The Normans occupied Glamorgan early in the Norman Conquest, appointing Urban their first bishop in 1107. He began construction of the cathedral in 1120 and had the remains of St Dyfrig transferred from Bardsey; the work was not completed until 1290. The west front dates from 1220 and contains a statue of St. Teilo. Bishop Henry de Abergavenny gave the cathedral its statutes. The Lady Chapel was built by William de Braose, bishop from 1266 to 1287. Damage was done to the church in 1400 during the rebellion of Owain Glyndŵr; his forces also destroyed the Bishop's Palace at Llandaff. Most of the other damage was repaired, most notably by Bishop Marshall, whose reredos partly survives. The northwest tower, the one without a spire, was added by Jasper Tudor and is now named after him. He assumed the lordship of Cardiff after the accession to the throne of his nephew, King Henry VII of England.

Late mediæval tombs include that of Sir David Mathew of Llandaff (1400–1484). Sir David ap Mathew was 'Grand Standard Bearer Of England', granted under King Edward IV, for saving his life at the Battle of Towton, 29 March 1461 during the War of the Roses. 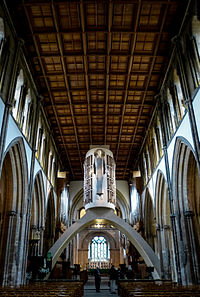 The nave of Llandaff Cathedral 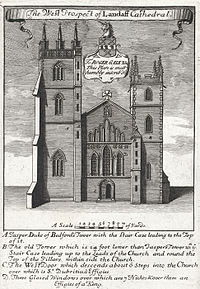 A west prospect of Llandaff Cathedral

During the Civil War, the cathedral was overrun by Parliamentarian troops.

The southwest tower suffered major damage in the Great Storm of 1703 and by 1720, was in a state of collapse. In 1734, work began on a new cathedral, designed by John Wood, the Elder,[2] and nicknamed the "Italian Temple". It was used for a hundred years but never completed and only a few stones remain.

During the 19th century, when the Bishop of Llandaff began, for the first time for centuries, to reside in Llandaff, the cathedral was extensively restored, the tower rebuilt and a spire added. Much of the restoration work was completed by local architect John Prichard between 1843 and 1869.[3] A triptych by Dante Gabriel Rossetti was designed for use as a reredos, and new stained glass windows were designed by Sir Edward Burne-Jones and Ford Madox Brown. The office of Dean was separated from that of the Archdeacon of Llandaff in November 1843.[4] The Cathedral School which existed from the time of the Elizabethan Bishop Blethyn until about 1700 was re-established by Dean Vaughan in 1880.

On the evening of 2 January 1941 during World War II the cathedral was severely damaged when a parachute mine was dropped near it during the Cardiff Blitz, blowing the roof off the nave, south aisle and chapter house. The top of the spire also had to be reconstructed[5] and there was also damage to the organ. Of British cathedrals, only Coventry Cathedral was damaged more, during the infamous Coventry Blitz.

Major restorations and reconfigurations were carried out under architect George Pace of York, and the building was back in use in June 1958. The Queen attended a service celebrating the completion of the restoration on 6 August 1960. The Welch Regiment memorial chapel was constructed, and Sir Jacob Epstein created the figure of Christ in Majesty which is suspended above the nave on a concrete arch designed by George Pace.

In February 2007 the cathedral suffered a severe lightning strike. Particular damage was caused to the electrics of the organ, which was already in poor condition. This prompted the launch, on 13 July 2007 (the 50th anniversary of the re-hallowing of the nave following the wartime damage), of an appeal to raise £1.5 million for the construction of an entirely new organ.[6] 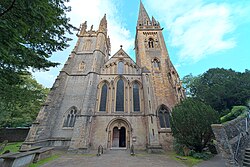 The west front of Llandaff Cathedral

For many years, the cathedral had the traditional Anglican choir of boys and men, and more recently a girls' choir, with the only dedicated choir school in the Church in Wales, The Cathedral School, Llandaff.[7] In addition, the parish choir sings at the weekly Parish Eucharist, and is a mixed choir of boys, girls, men and women. Women were only allowed to sing in the choir from 2005 onwards.[8]

The organ that was installed after the wartime damage was never entirely satisfactory, even before the lightning damage. Originally it had been planned to install a new organ at that time, but the costs of about 1 million pounds were deemed to be too high in the austere climate of post-war Britain. Work on installing the new organ, by the Nicholson's of Malvern firm of organ builders, began in autumn 2008. Though not fully completed, it was brought to a playable stage by Easter 2010 and had its inaugural performance (the Gloria of Louis Vierne's Messe Solennelle) at the Easter Vigil service on 3 April 2010.The remaining stops were added in the late summer of 2013.[6] This is the first entirely new organ for a British cathedral since that for Liverpool Metropolitan Cathedral in 1967.[6]

The cathedral has a ring of twelve bells (with an additional "flat sixth", to make thirteen in total) hung for change-ringing, located in the Jasper tower. The current bells were installed in 1992, replacing a previous ring of ten.[1][9]

In December 2013, five days before Christmas, the Cathedral Chapter announced that all salaried adult members of the choir (altos, tenors and basses) were being made redundant, along with the Assistant Organist. The Cathedral was in the midst of a financial crisis, and the Chapter intended to save £45,000 a year by taking these measures.[10]