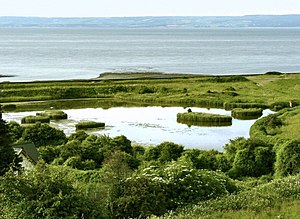 Lagoon on The Leys of East Aberthaw

Aberthaw is nearly opposite to Minehead in Somerset. The village of East Aberthaw is situated approximately ¼ mile inland from the sea. The River Thaw, a stream which meets the sea at Aberthaw is very small, and as its current has not created a channel, there is instead a swamp.[1] From Dunraven to Aberthaw, the coastal cliffs feature blue and brown argillaceous limestones, shales, and marls. As far as East Aberthaw, the cliffs are under 100 ft, and in some places not more than 50 ft. For a short distance east of Pleasant Harbour in East Aberthaw, there are wooded cliffs about 300 yards from the high-water mark of ordinary tides. West of the port of Aberthaw there is an expanse of alluvial ground protected by embankments. This is bordered by hillocks of blown sand, and these rise about 20 ft above the shingle beach. Bordering the blown sand, there is a ridge of thick shingle, and beyond this, between tide-marks, is an expanse of shingle on mud. There are no cliffs to the west of Aberthaw until Summerhouse Point.[2] Font-y-Gary Cave is near Aberthaw.[3] 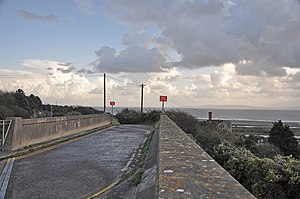 Lane above The Leys, East Aberthaw

The beach in front of the power station, The Leys, is near Gileston and West Aberthaw; it is well known for its sea fishing.[4] The East Aberthaw Coast Conservation Area covers the whole of the East Aberthaw village and contains a lagoon on The Leys. Breaksea Point, at the edge of Limpert Bay at Aberthaw, is the alleged southernmost point of Wales, although contested with Rhoose Point.

Aberthaw derives its name from the Welsh-language word 'aber', meaning estuary or river mouth, of the river Thaw. The existence of a safe, natural harbour provided an early impetus for the area's development and trade.[5] There were settlements in the 2nd and 3rd centuries, substantiated by Roman pottery, shells and tiles that were discovered when a new pipeline was laid through East Aberthaw in the 1950s.[6] Excavations in Well Road revealed the foundations of walls which may have belonged to the Roman settlement, while further discoveries of coins, jewellery, tiles and Samian ware pottery suggested that the nearby bay served as a landing point or port during the Roman invasion.[6] The Shrunken Village at West Aberthaw, considered an Ancient Monument in Glamorgan, consisted of a shrunken hamlet within a narrow strip of St. Athan parish which extended to the Bristol Channel.[7]

A small village centred around the intersection of two roads had developed by the mediæval period. To the east, what is now Port Road led towards Fonmon and Penmark, whilst to the west, the present Well Road (previously known as Marshe Way) led towards the marshland and a ford across the estuary. The road leading north- south connected the coast with the settlements inland, and as Aberthaw trade flourished, the roads were used for moving imported goods to the markets at St Athan and Cowbridge. 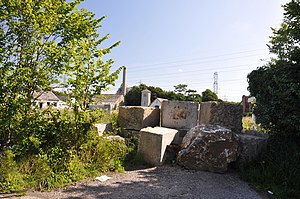 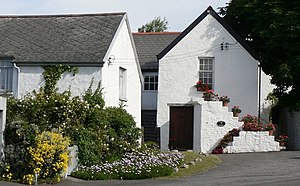 Of the buildings grouped around the crossroads, the original fabric of Lower Farm House and the once- thatched Rose Cottage and Marsh Cottages can all be dated to the mediæval era. The Blue Anchor Inn is likewise of mediæval origin, and appears to have been erected in 1380.[8][9] The village, which came within the parish of Penmark,[10] is also known to have included a small chapel which was possibly located towards the south of the settlement, as suggested by the marking of 'Chapplefeld' on the Evans Mouse map of 1622. This was to serve as a place of worship until being converted to a house at the turn of the 17th century.

In the 16th century, the Aberthaw port, situated to the south east of the village proper, had emerged as a small but thriving harbour.[11] The ships took wool and foodstuffs and returned with wine, salt, dried fruit and leather from the towns of northern France. Aberthaw port's importance was furthered by the loss of Porthkerry harbour to a 1584 storm, rendering Aberthaw the principal calling- point within South Wales between Cardiff and Swansea.

By the first half of the 17th century, boats were also departing for Spain and Ireland. A similarly flourishing trade with the West Indies, chiefly in sugar and tobacco, did not, however, survive the disruption caused by the outbreak of the Civil War. Within the context of the village, the port played a significant role in the livelihoods of many residents in the 17th century, though not always in a legal manner: smuggling was rife within the Bristol Channel. Buildings such as the fortified Marsh House, built just to the west of the village in 1636, appear to have been used for storage of illegally imported goods, especially tobacco.[12] During the reign of George II, the Master of Fonmon sent soldiers to Aberthaw to try and capture the ringleaders of the smuggling gang.[13] Beyond the business of the harbour, agriculture was also of central importance to the settlement, the land to the east of the village, between East Aberthaw and Fonmon, being marked by windmills and orchards.[14] To the west, the marsh lands were suitable for grazing. 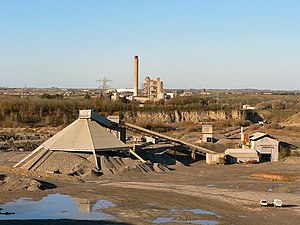 Aberthaw's maritime trade continued throughout the 18th century, but by the 1840s, its role as a port declined: the harbour ‘is resorted to by a few coasting-vessels of inferior burthen’, as the Topographical Dictionary of Wales in 1849 reported. In 1851, Aberthaw had a population of 495 people.[15] The principle material then being exported, however, was the local lias limestone, called Aberthaw tarras, which was used to make hydraulic lime, which sets under water and was therefore very useful for building light houses (including the Eddystone Lighthouse) and canal locks. This limestone, considered to be of high quality,[16] was to play a key role in the local economy during the ensuing years, beginning with the opening of Aberthaw Lime Works in January 1888.[17] From December 1897, the area was served by the newly constructed Vale of Glamorgan Railway,[18] and a second plant, the Aberthaw and Bristol Channel Portland Cement Works, began production to the north of the village in 1916.[19]

The establishment of these industries in close proximity to Aberthaw was to result in an increased demand for residential accommodation, and by 1919, two new communities had been added at the northern and southern edges of the village. The community, by this time, had gained a Methodist Chapel and a Mission Room,[20] the latter erected in an Arts and Crafts style on Station Road. Services such as a post office and village shop were also established. 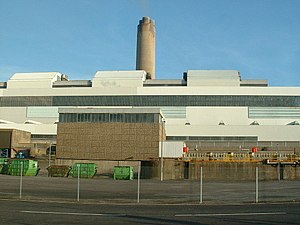 In 1966, Aberthaw Power Station opened, which saw the Thaw river diverted and the remnants of the old port effectively diminished.[22][23] Beyond the conversion of the former mission hall and a number of former agricultural buildings to residential use, East Aberthaw itself, however, has undergone little development.[5] 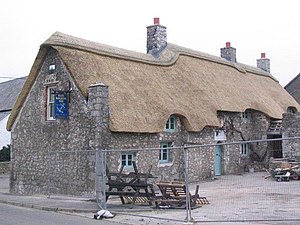 The principal building is the popular Grade II* listed Blue Anchor Inn, a long low building with walls and low timber beams dated to 1380, with a thatched roof.[24] The inn was used as a tobacco drying shed during the smuggling days.[25] The inn caught fire in 1922, 2004, and again in 2009, the last fire burning about 30% of the thatched roof.[25]

Close by is the Grade II listed Marsh House, an 18th-century building with a symmetrical front and a slated catslide roof. The house was of major importance to local trade and smuggling operations, used as a storehouse, especially for tobacco. The Granary is a Grade II listed building dated to the early 19th century and includes stables, a hayloft and granary. The building is now used as a private residence.[5] Also listed is 1 and 2 Marsh Cottage and The Haven. Several other unlisted cottages and houses are of note, such as Upper House Farm within the Conservation Area, and several converted barns.[5] St Athan Boys' Village was a holiday camp located in West Aberthaw, which operated from 1925 through 1991. 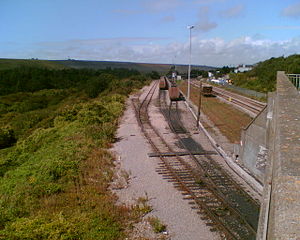 Originally a station on the Barry Railway, and a junction for its connection to the Cowbridge and Aberthaw railway,[26] the station closed together with the rest of the line to passengers in the early 1980s. Although the line reopened to passengers in 2002, Aberthaw remains closed except for its signal box, which controls access to Aberthaw Power Station. Half a mile to the north is the B4265 road which connects Barry to Bridgend, via Llantwit Major and St Brides Major. Cardiff Airport is just two miles to the north-east. From the crossroads, a lane (Well Road) drops down the hill to a tunnel underneath the railway lines. To the east, a similarly narrow lane leads up the slight hill to a farm group (Upper House Farm) and then into open countryside and woodland, beyond which, is the very large limestone quarry.