Aberdare is an industrial town in Glamorgan, lying within the Cynon Valley where the Rivers Dare and Cynon meet. The population at the 2001 was 31,705.

Aberdare is 4 miles southwest of Merthyr Tydfil, 24 miles northwest of the county town, Cardiff and 22 miles northeast of Swansea.

Ironworks were established at Llwydcoed and Abernant, Glamorgan in 1799 and 1800 respectively, followed by others at Gadlys and Aberaman in 1827 and 1847. These have not been worked since about 1875. After this, the iron industry was represented only by a small tinplate works, but by this stage the economy of the town was dominated by the coal mining industry. There were also several brickworks and breweries. During the latter half of the 19th century, considerable public improvements were made to the town, which became, despite its neighbouring collieries, a pleasant place to live. Its institutions included a post-graduate theological college opened by the Church of England in 1892, until 1907, when it was removed to Llandaff).

With the ecclesiastical parishes of St Fagan's (Trecynon) and Aberaman carved out of the ancient parish, Aberdare had 12 Anglican churches and one Roman church, built in 1866 in Monk Street near the site of a cell attached to Penrhys monastery, and at one time had over 50 Nonconformist chapels. The services in the majority of the chapels were in Welsh.

There are several cairns and the remains of a circular British encampment on the mountain between Aberdare and Merthyr. Hirwaun moor, 4 miles to the north west of Aberdare, was according to tradition the scene of a battle at which Rhys ap Tewdwr, prince of Dyfed, was defeated by the allied forces of the Norman Robert Fitzhamon and Iestyn ap Gwrgant, the last prince of Glamorgan. 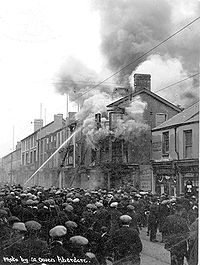 In the early years of Aberdare's development, most of the coal worked in the parish was coking coal, and was consumed locally, chiefly in the ironworks. In 1836, exploitation of the "Four-foot Seam" of high-calorific value steam coal began, and pits were sunk in rapid succession. This coal was valuable for steam railways and steam ships, and an export trade began, via the Taff Vale Railway and the port of Cardiff.

The population of the parish rose from 6,471 in 1841 to 14,999 in 1851 and 32,299 in 1861 and John Davies[1] described it as "the most dynamic place in Wales". In 1851, the Admiralty decided to use Welsh steam coal in ships of the Royal Navy, and this decision boosted the reputation of Aberdare's product and launched a huge international export market.[2] Coal mined in Aberdare parish rose from 177,000 tons in 1844 to 477,000 tons in 1850,[3] and the coal trade, which after 1875 was the chief support of the town, soon reached huge dimensions. Steam coal was subsequently found in the Rhondda Valley and further west, but many of the great companies of the Welsh coal industry's Gilded Age started operation in Aberdare and the lower Cynon Valley, including those of Samuel Thomas, David Davies and Sons, Nixon's Navigation and Powell Duffryn.[2] In common with the rest of the South Wales coalfield, Aberdare's coal industry commenced a long decline after First World War, and the last two deep mines still in operation in the 1960s were the small Aberaman and Fforchaman collieries, which closed in 1962 and 1965 respectively.

On 11 May 1919, an extensive fire broke out on Cardiff Street, Aberdare. 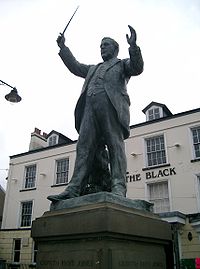 Aberdare, during its boom years, was considered a centre of Welsh culture: it hosted the first National Eisteddfod in 1861, again in 1885, and in 1956 at Aberdare Park where the Gorsedd standing stones are still found.

The Coliseum Theatre is Aberdare's main arts venue, containing a 600-seat auditorium and cinema. It is in nearby Trecynon and was built in 1938 using miners' subscriptions.

Aberdare was the birthplace of the Second World War poet Alun Lewis, and there is a plaque commemorating him, including a quotation from his poem The Mountain over Aberdare.

Griffith Rhys Jones - or Caradog as he was commonly known - was the Conductor of the famous 'Côr Mawr' of some 460 voices (the South Wales Choral Union), which twice won first prize at Crystal Palace choral competitions in London in the 1870s. He is depicted in the town's most prominent statue by sculptor Goscombe John, unveiled on Victoria Square in 1920. 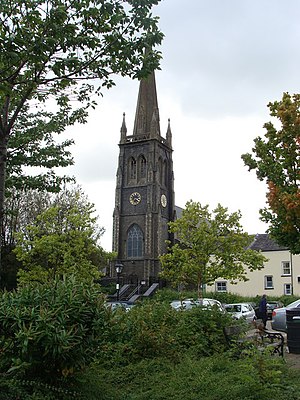 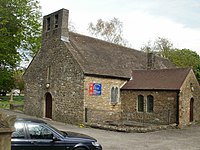 In the town centre is St Elvan's Church, a Church in Wales church at the heart of the Parish of Aberdare. The church was built between 1851 and 1852 and has had extensive work since its erection.[4] The church also has a modern electrical, two-manual and pedal board pipe organ[5], that is still used in services. The nearby St John the Baptist Church of the same parish was originally built in the 13th century, with some of the original architecture still intact.[4] Also of the same parish is St. Matthew's Church (1891), Abernant.[6]

In the Parish of Aberaman and Cwmaman is St Margaret's Church, with an old, but beautiful, pipe organ with two manuals and a pedal board. Also in this parish is St. Joseph's church, Cwmaman. St. Joseph's has recently undergone much recreational work, almost converting the church into a community centre. However, regular church services still take place. Here, there is a two-manual and pedal board electric organ, with speakers at the front and sides of the church. In the Parish of Aberdare St Fagan, churches serve the communities of Trecynon, Cwmdare and Llwydcoed - St Fagans, St Luke's and St James's respectively.

There were many chapels in the area, most of which from the non-conformist revival period. Few of these are still used, and many have been converted or demolished. Notable perhaps are Saron Chapel and Siloa Chapel.

Saron, in Davis Street, Aberaman, was used for regular services by a small group of members until 2011. For many years, these were held in a small side-room, and not the chapel itself. The chapel has a large vestry comprising rows of two-way-facing wooden benches and a stage, with a side entrance onto Beddoe Street and back entrance to Lewis Street. Although the building is not in good repair, the interior, including pulpit and balcony seating area (back & sides), is in good order. In February 1999, Saron was made a Grade II Listed Building.[7]

Siloa has been 're-established' as a Welsh language chapel.

Highland Place Unitarian Church celebrated its 150th anniversary in 2010,[8] with a number of lectures on its history and the history of Unitarianism in Wales taking place there. The church, yet with one of the few surviving Unitarian congregations left in Britain, has a two-manual pipe organ with pedal board that is used to accompany most services. The connected schoolroom is used for meetings and socialising after services.