Nelson is a village in Glamorgan, found ten miles north of Cardiff, the county town, at the lower end of the Taff Bargoed Valley. Adjacent are Treharris, Trelewis and Quakers Yard.

The village sits in a natural basin close to the confluence of the Taff and Taff Bargoed valleys, and the resultant relative flatness and surrounding fields are quite atypical of the steep sided valleys and linear villages associated with the area. To the south the land rises gently to the 1,257-foot (383-m) summit of Mynydd Eglwysilan, which offers panoramic views of the Brecon Beacons, Bristol Channel and the coasts of Devon and Somerset.

To the east of the village lies Nelson Bog (designated a Site of Special Scientific Interest. The bog is host to rare plants and wildlife including orchids, bats, badgers and otters.

Nelson was originally called Ffos-y-Gerddinen, a relatively flat piece of land at the southern extremity of the Taff Bargoed Valley to the south of the hamlet of Llancaiach. It existed on a drovers' trail from the coast towards Merthyr Tydfil and onwards to Brecon and the Cambrian Mountains. Here an enterprising man built a coaching inn that he called Nelson, possibly after Admiral Lord Nelson and his victory at the Battle of Trafalgar.

Had in not been for the development of the South Wales coalfield, Nelson would have remained just a coaching inn surrounded by fields. When the Llancaiach Colliery was developed from 1811, it created a need for new housing for the workers and heavy transport for the coal, which spilled onto the flat lands below the colliery. 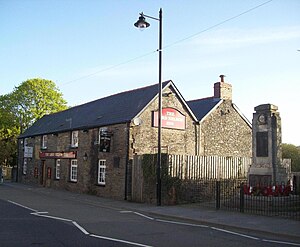 Freight transport from Merthyr Tydfil had already brought about the development of the Glamorganshire Canal which by-passed Nelson in the nearby Taff Valley, but in 1841 the Taff Vale Railways Llancaiach Branch was built specifically to service Llancaiach Colliery and entered the Taff Bargoed Valley via the centre of Nelson. Looking for a name for its station, which was built on the flat land south of the colliery, the directors of the TVR chose the name of the coaching inn.[1] When the Taff Vale Extension railway of the Newport, Abergavenny and Hereford Railway was built, it replicated the TVR naming convention for its station, and Nelson was born as a village with a separate identity to Llancaiach. 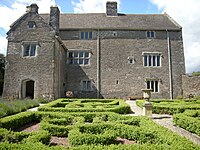 Llancaiach Fawr is a 16th Century manor house which lies at the northern end of Nelson. The building is now a living history museum set in the year 1645 at height of the English Civil War, the year in which King Charles I visited the house in an attempt to persuade its owner, Colonel Edward Pritchard, not to switch allegiance to the Roundheads. In spite of this the colonel joined the Parliamentarian cause some time later. The manor is now reputed to be one of the most haunted buildings in Wales. 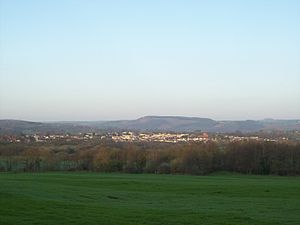 Originally created as a result of transport needs for the Llancaiach Colliery, the Taff Vale Railways Llancaiach Branch serviced only freight needs until the development of the Taff Vale Extension, which brought about the introduction of passenger services from 1862. Nelson's position as a junction station was increased after it was joined by a passenger and freight line to Dowlais on the Taff Bargoed branch which opened in 1876 and closed in 1964. Passenger services from Pontypridd were withdrawn along the Llancaiach Branch from 1932,[1] and the Taff Vale Extension from 1964 during the Beeching cuts. The station was demolished in 1972.

A very small part of the TVE Vale Of Neath line still exists to service the freight associated with coal extraction of the Ffos-y-fran Land Reclamation Scheme on the Taff Bargoed branch. Since the closure of its railway stations, the closest railway station to Nelson is two miles away at Ystrad Mynach.

Nelson lies one mile east of the A470 Abercynon roundabout, while the A472 trunk road bypasses the village. Bus services are provided by various companies and exist to the towns of Bargoed, Blackwood, Caerphilly, Merthyr Tydfil, Pontypridd, Treharris and Ystrad Mynach. The direct bus service to Cardiff was discontinued in 2009, with a change at Pontypridd now required.