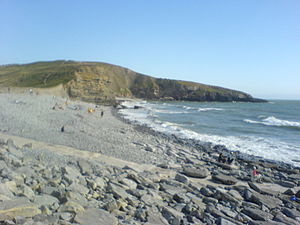 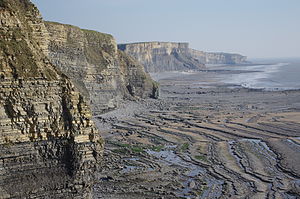 Cliffs on the Glamorgan Heritage Coast south of Dunraven Park.

Southerndown is a seaside village to the south-west of Bridgend in Glamorgan. It is close to Llantwit Major and Ogmore-by-Sea. It is mostly known for its beach (officially named Dunraven Bay), which is a popular tourist destination during the summer months and since 1972 has been designated a Heritage Coast and is part of the Southerndown Coast Site of Special Scientific Interest. When the tide is out there is an expanse of sand and pools. The cliffs are an obvious example of sedimentary rock.

As Southerndown, along with nearby Ogmore-by-Sea, is a west-facing beach (and hence on the Atlantic coast), off-shore winds from the East generate much good-quality surf, helped by the warming effects of the Gulf Stream.

There are actually two beaches separated by a headland. On the headland are the remains of Dunraven Castle.

The second beach is only accessible by steep steps and is largely unused. The steps also reach the beach fairly far out from the cliffside, so it is easy to become cut off from them and stranded on the beach at high tide. The second beach is one of the largest in Glamorgan and stretches all the way down the coast to Nash Point near Llantwit Major.

It has been used in the occasional TV production, including on Doctor Who: as Bad Wolf Bay in "Doomsday" and "Journey's End" and as the surface of the alien planet in "The Time of Angels" and "Flesh and Stone" and as the engine room of the ark ship in "Dinosaurs on a Spaceship". It also appeared in Merlin in the first season episode 'The Labyrinth of Gedref'. It was also featured in the Bob Dylan film Hearts of Fire, with Dylan looking out over the second beach down onto Rupert Everett.

During the summer, Southerndown Lifesaving Club use the beach as opposed to St Donat's Castle. It has a notable golf club, Southerndown Golf Club.

Geology of Southerndown and Dunraven Bay

All the rocks exposed in the area of Southerndown are sedimentary rocks. They were laid down as deposits of mud silt, sand and lime that, over long periods of time, were compacted and solidified into limestone, shale (compacted mud) and conglomerate (a rock comprising rounded pebbles of various sizes).

During the early Jurassic Period, a shallow sea spread northwards over the land. As the water deepened the higher areas became islands before they finally became inundated. The water depth influenced the kinds of sediments that were deposited. Rocks formed close to the shore (Sutton Stone and Southerndown Beds) are strikingly different from the Blue Lias, which was deposited at the same time but farther offshore. The Sutton Stone consists of massive, white, conglomeratic limestones with pebbles of black chert (silica) and carboniferous limestones. The overlying Southerndown Beds are blue/grey conglomeratic limestones and limy sandstones with thin shale partings. The Sutton Stone and Southerndown Beds pass laterally into, and are overlain by, the alternating blue-grey limestones and shales of the Blue Lias. The Jurassic rocks are generally rich in fossils. Shells of bivalves, and ammonites, fragments of crinoids, corals and pieces of carbonised fossil wood are quite common.

During the last 200 million years further earth movements have caused folding and fracturing of the Jurassic rocks and, since the end of the last Ice Age, the present coastline has been shaped by subaerial and marine erosion, both of which continue today.[1]

This Glamorgan article is a stub: help to improve Wikishire by building it up.
Retrieved from "https://wikishire.co.uk/w/index.php?title=Southerndown&oldid=51755"
Categories: