Ferndale is a small town in the Rhondda Valley in Glamorgan. Neighbouring villages include Blaenllechau, Maerdy and Tylorstown.

In Welsh, Ferndale is known as Glynrhedynog, the name of one of the old farms on which the town is built. In its infancy Glynrhedynog was also known as Trerhondda after the name of the first large chapel to be built in the town. The naming of settlements after chapels was widespread in Wales at the time, as is shown in village names such as Bethesda, Beulah and Horeb, but neither Glynrhedynog nor Trerhondda was destined to be used for long.

The Welsh word Glynrhedynog is made from the words "glyn rhedynog" meaning "ferny valley", and so coal from the Glynrhedynog pits was marketed as Ferndale coal, a much easier name for English buyers to assimilate. The Ferndale pits are what drew the workforce and their families to the area, and by the 1880s "Ferndale" was well established as a thriving town. With the phasing in of bilingual road signs from the late 1980s onwards, the name Glynrhedynog gradually reappeared and is now the officially designated Welsh language name for Ferndale. The Welsh language is on the increase in Ferndale after the village adopted the English language during the Industrial revolution. A Welsh language school is situated near the park and the school is named after the park's lake, 'Llyn-y-Forwyn.'

Two large coal mining colliery disasters occurred in Ferndale during the 19th century. The first occurred on 8 November 1867, when an underground explosion killed 178 miners at the Ferndale Colliery owned by David Davis and Sons Ltd. The second disaster happened on 10 June 1869 when a further explosion resulted in the death of 53 miners.[2]

Ferndale has developed over recent years. Some new features have been added such as a new astro-turf field, car park and an all weather cricket training enclosure. The Sky1 TV comedy series Stella is largely filmed on location in Ferndale.

Between 1849 and 1856, the Taff Vale Railway opened the Maerdy Branch from Porth, including a station at Ferndale. Passenger services were withdrawn in 1964, and the line closed completely and was lifted from June 1986 after coal from Mardy Colliery was raised through Tower Colliery. Since 2005, the southern section from Porth to Pontygwaith is now the A4223 Porth and Lower Rhondda Fach Relief Road (Porth Bypass).[3] The upper section including the section passing Ferndale has become a branch of the Taff Trail cycleway. 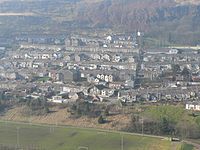 Adjacent to Llyn y Forwyn is an astro-turf football field that, during the Summer, annually becomes the ground of sports days for many of the local junior schools. Also within the confines of Darran Park can be found a tennis court and bowling green.

In December 2006, the Ferndale Skate Park was opened with indoor ramps and other equipment available to BMX riders, 'bladers' and skateboarders. The skatepark began with the aim of improving the prospects of school leavers in the area, providing a 'safe haven' from the influences of drugs and alcohol and an attempt to bring sports and healthy living to the area in a novel approach. It has since received National Lottery continuation funding as well as a Rhondda Trust grant to secure the future for an additional 3-year period. It currently works with seven schools across the area, and plans to launch a mountain bike initiative designed to get groups and local young people enjoying the cycle and biways in the area.