From Wikishire
Jump to: navigation, search
Not to be confused with Llantrisant, Anglesey nor Llantrisant, Monmouthshire

Llantrisant is a town in Glamorgan, standing on the River Ely and the River Clun. It is a hilltop town, at an altitude of 565 feet above sea level. The town is home to the Royal Mint.

A settlement has existed on this site from at least the beginning of the 6th century, when the poet Aneurin wrote of 'the white houses of Glamorgan' when referring to Llantrisant.[1]

The place was seized around 1246 by Richard de Clare who built Llantrisant Castle. It is thought that de Clare established the borough of Llantrisant though the exact charter occurred in 1346.[2]

In 1346, Llantrisant was granted a Royal Charter months before the archers from the town helped Edward, the Black Prince, win a victory against the French army at the Battle of Crecy. The Llantrisant longbow men were pivotal in the adoption of the English longbow as the missile weapon of choice for the English crown during the Middle Ages.

An ancient tradition called the Beating the Bounds, where local children are bounced by elders on to the boundary stones of the old borough, still occurs every seven years and has its roots set as far back as the 14th century. The rite was intended as a reminder to each generation of the importance of the borough boundaries. The children in question are held under the arms and the legs, and their backside is bounced on each of the stones of the old borough. It is believed that the Beating of the Bounds started in 1346, when Llantrisant was awarded its Royal Charter. This allowed them the freedom to trade without paying tolls within the boundaries of the former borough. The last occasion of this event was in June 2010, but the event is now seen as a purely historic tradition and social community event.[3][4]

At nearby Tarren Deusant is a spring with unusual petrosomatoglyph carvings of two faces, two saints (1696), but now six are present (Sharp 1979).

Llantrisant has a wealth of jolly pubs, which include The New Inn, the Wheatsheaf and the Cross Keys Hotel. Formerly in the Bull Ring was the Rock and Fountain pub, which became the home of the original Llantrisant Workingmen's Club founded in May 1953 by Seth Morgan, Freeman of Llantrisant.

Buildings of the town

The major site here is the Royal Mint.

The focal point of the town is the Bull Ring, a commercial square in the centre of the town that was used for bull-baiting, until it was disallowed in 1827 due to unruly crowds.[5] The square contains a statue of Dr William Price a pioneer of cremation.[2]

The first workhouse in Glamorgan opened in Llantrisant in May 1784, using a number of adapted cottages on Swan Street and part of the Black Cock pub on Yr Allt,[1] a road to the south west of the Bull Ring, between the parish church (to the west) and the castle (to the east).

The Union Workhouse was built in 1884 on the Bull Ring – west of where Dr Price's statue stands today and behind the town pump. It became known as The Model House, in the rather optimistic belief that its inmates would lead a life of model Christianity. Two pubs, a shop and a cottage were demolished to make way for the expansion of the workhouse.[5]

The building closed as a workhouse in the early 1900s and first became a boarding house, then an inn and later a general store, called County Stores. They were known as a cornflour and provisions merchant, and a linen and woolen drapers, also selling boots and shoes. The site was bought in the 1950s by 'Planet Gloves', who manufactured gloves there until the late 1960s. The Model House stood empty for many years before being bought by the local authority to convert into a craft and design centre.[6]

In 1989 the Model House re-opened as a craft and design centre, run as a charirty and later as a council museum. 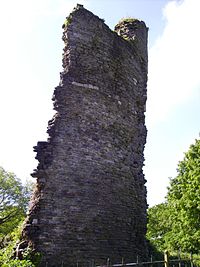 The remains of Llantrisant Castle

Llantrisant Castle stands in parkland in the centre of the town though only one wall of the raven tower remains. Although initially built as a wooden fortification it was rebuilt as a stone structure around 1246 by Richard de Clare, Lord of Glamorgan. In 1294 the castle was damaged during the uprising against the Norman overlords, led by Madog ap Llywelyn, and again in 1316 by Llywelyn Bren. It is believed that the castle was destroyed in 1404 by Owain Glyndŵr though there is no written proof of the event. John Leland reported the castle as ruined in his writings in 1536.[7] 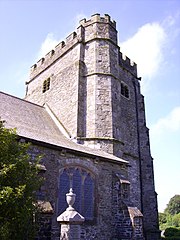 The 15th century tower of The Church of the Three Saints, Llantrisant

By the early 1900s Llantrisant had eight chapels, as well as the parish church.[5] Only two religious buildings remain. The elder is the church of 'y tri sant'. The three saints to which the church is dedicated are St Illtyd, St Gwynno and St Dyfodwg. The site is believed to have been a place of Christian worship since at least the 7th century, and in 1096 the parish church was built and dedicated. The church was rebuilt by Richard de Clare in 1246 in the Norman style[8] and in the 15th century the tower was added. Its interior houses an effigy of a 13th-century warrior, believed to be Cadwgan, lord of Miskin, a valuable Welsh church monument. The interior was restored in 1874 by Welsh neo-gothic designer John Prichard. The second religious building in Llantrisant is Penuel chapel, built in 1826.

At the town's highest point is the remains of a 13th-century windmill – stone tower known locally as “Billy Wynt”. By the early 19th century the tower was in ruins and in 1893 it was restored as a folly.

Llantrisant is typical of most locations in the south Wales region, being home to typical upland habitat birds and mammals of the British Isles. The town also contains Llantrisant Common and Pastures, a 280-acre Site of Special Scientific Interest, which is home to several rare plants.

The town is the home of the Royal Mint, which manufactures all British coins. The Royal Mint transferred to Llantrisant in 1967[2] and its attractions include the Mint's museum. The Mint employs around 900 people.[9]

Sport flourished in Llantrisant for centuries and the remains of the ancient Fives Court of the 1790s, stands at the rear of the Workingmen's Club.

The town is home to one of the very longest established male choirs in Wales. Established at least as early as 1898, the choir is a prolific touring choir having sung in the USA, Italy, Cyprus, Slovakia, Poland, France, Germany, Ireland, the Netherlands and Spain. They travel extensively in the UK supporting charity events and singing at concert engagements. The choir has appeared at many notable venues, including The Royal Albert Hall, The Santa Maria Maggiore, Wales Millennium Centre and the Hollywood Bowl. The choir has a wide ranging membership drawn from all ages and social backgrounds. They sing a mix of music from traditional choral classics, Welsh hymns and modern pop music.