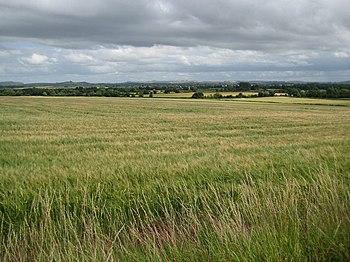 The Vale of Pewsey from Etchilhampton Hill

The Vale of Pewsey or Pewsey Vale is an area of Wiltshire to the east of Devizes and south of Marlborough. It represnts the low ground between the Marlboriough Downs to the north and Salisbury Plain to the south. In this broad valley flows the River Avon.

The Vale is centred on the town of Pewsey, and beyond Pewsey spreads a beautiful agricultural landscape.

The vale is an extent of lower lying ground separating the chalk downs of Salisbury Plain to the south from the Marlborough Downs to the north. It is around 19 miles long and around 3 miles wide. At the western end is the town of Devizes. Larger villages in the vale include Pewsey and Burbage with many smaller villages.

The vale is a major east-west feature opening to the west towards the Bristol Channel, but is drained by the headwaters of the Salisbury Avon, rather than the westward-flowing Bristol Avon. The river cuts through the chalk scarp to the south at Upavon and crosses Salisbury Plain towards the south coast. The higher part of the eastern vale south of Burbage is drained by the River Bourne, which cuts the scarp at Collingbourne Kingston, joining the Avon at Salisbury. Since the area is not believed to have been glaciated, this probably indicates that the course of the rivers pre-dates the modern topography.

The vale is not used by any major roads, but is followed by a railway and canal as a route between the London Basin and the west. To the north of Burbage the head of the Avon valley, draining west into the vale, meets the head of the River Dun, draining east to the Kennet and the Thames. The valley floor at around 492 feet above sea level provides a route through the downs which locally reach 900 feet.

The Kennet and Avon Canal and the main line railway from London to the south-west make use of this route, the canal using the Bruce Tunnel. Formerly another rail route between Andover and Marlborough also followed this gap. Another line formerly branched off towards Bath by way of Devizes at the western end of the vale.

The vale lies along the eroded core of an anticline, a westward extension of the Mendip Axis, with a relatively thin covering of Mesozoic sediments folded upwards over an up-faulted horst of Palaeozoic rocks.[1] The floor of the vale is floored by Albian (Lower Cretaceous) beds of the Upper Greensand, exposed by removal of the overlying chalk. It is surrounded to the north and south by chalk scarps which close to the east near Burbage. There is also a small inlier of Greensand to the east at Shalbourne;[2] this area drains northwards to the Kennet.

In 2000, near the village of Wilcot, a schoolboy found a hoard of Roman coins which became known as the Stanchester Hoard. The find is now kept at the Wiltshire Heritage Museum in Devizes.

Pewsey is the centre of activity for many of the smaller villages in and around the Vale of Pewsey and, as such, offers a wide range of activities for its small size.