Silbury Hill is a prehistoric artificial chalk hill 131 feet high near Avebury in Wiltshire. It is part of the Stonehenge, Avebury and Associated Sites UNESCO World Heritage Site.

Silbury Hill – which is part of the complex of Neolithic monuments around Avebury, which includes the Avebury Ring and West Kennet Long Barrow – is the tallest prehistoric human-made mound in Europe[1] and one of the largest in the world; it is similar in size to some of the smaller Egyptian pyramids of the Giza Necropolis.[2] Its original purpose however, is still highly debated.

Silbury Hill is in Wiltshire, in the Kennett Valley, close to the A4, between the towns of Marlborough and Calne. The route of a Roman road runs between Beckhampton and West Kennett and runs to the south of the hill. In 1867 the Wiltshire Archaeological and Natural History Society excavated the east side of the hill to see if traces of the Roman Road were underneath it. No traces were found and later excavations south of the hill located the road in fields to the south making a pronounced swerve to avoid the base of the hill. This was conclusive proof that the hill was there before the road - but the hill provided an alignment sight-line for the road.[3]

Several other important Neolithic monuments in Wiltshire in the care of English Heritage, including the large henges at Marden and Stonehenge, may be culturally or functionally related to Avebury and Silbury. 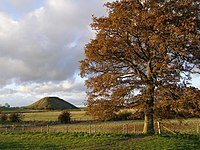 Seen from near Swallowhead Springs

Composed mainly of chalk and clay excavated from the surrounding area, the mound stands 131 feet high[4] and covers about 5 acres. It is a display of immense technical skill and prolonged control over labour and resources. Archaeologists calculate that Silbury Hill was built about 4,750 years ago and that it took 18 million man-hours, or 500 men working for 15 years (Atkinson 1974:128) to deposit and shape 325,000 cu. yds of earth and fill on top of a natural hill. Euan W Mackie asserts that no simple late Neolithic tribal structure as usually imagined could have sustained this and similar projects, and envisages an authoritarian theocratic power elite with broad-ranging control across southern Britain.[5]

The base of the hill is circular and 550 feet in diameter. The summit is flat-topped and 100 feet in diameter. A smaller mound was constructed first, and in a later phase much enlarged. The initial structures at the base of the hill were perfectly circular: surveying reveals that the centre of the flat top and the centre of the cone that describes the hill lie within a yard of one another.[6] There are indications that the top originally had a rounded profile, but this was flattened in the Middle Ages to provide a base for a building, perhaps with a defensive purpose.[7]

The first phase, carbon-dated to 2400 BC ±50 years,[8][9] consisted of a gravel core with a revetting kerb of stakes and sarsen boulders. Alternate layers of chalk rubble and earth were placed on top of this: the second phase involved heaping further chalk on top of the core, using material excavated from an encircling ditch. At some stage during this process, the ditch was backfilled and work was concentrated on increasing the size of the mound to its final height, using material from elsewhere. The step surrounding the summit dates from this phase of construction, either as a precaution against slippage,[10] or as the remnants of a spiral path ascending from the base, used during construction to raise materials and later as a processional route.[8][9] 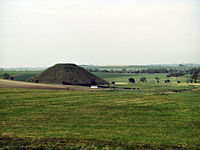 There have been several excavations of the mound. The site was first illustrated by the seventeenth-century antiquarian John Aubrey, whose notes, in the form of his Monumenta Britannica, were published by Dorset Publishing Co. between 1680 and 1682. Later, William Stukeley wrote that a skeleton and bridle had been discovered during tree planting on the summit in 1723. It is probable that this was a later, secondary burial. The excavation came in October 1776 when a team of Cornish miners overseen by the Duke of Northumberland and Colonel Edward Drax sank a vertical shaft from the top.[11] In 1849 a tunnel was dug horizontally from the edge into the centre. Other excavations were undertaken in 1867 and 1886.

Flinders Petrie investigated the hill after the First World War. In 1968 to 1970 professor Richard J C Atkinson undertook work at Silbury which was broadcast on BBC Television. This excavation revealed most of the environmental evidence known about the site, including the remains of winged ants which indicate that Silbury was begun in an August. Atkinson dug numerous trenches at the site and reopened the 1849 tunnel, where he found material suggesting a Neolithic date, although none of his radiocarbon dates are considered reliable by modern standards. He argued that the hill was constructed in steps, each tier being filled in with packed chalk and then smoothed off or weathered into a slope.

Atkinson reported the C 14 date for the base layer of turf and decayed material indicated a corrected date for the commencement of Silbury was close to 2750 BC.[12]

After heavy rains in May 2002, a collapse of the 1776 excavation shaft caused a hole to form in the top of the hill. English Heritage undertook a seismic survey of the hill to identify the damage caused by earlier excavations and determine the hill's stability. Repairs were undertaken but the site remained closed to the public. As part of this remedial work English Heritage excavated two further small trenches and made the important discovery of an antler fragment, the first from a secure archaeological context at the site. This produced a reliable radiocarbon date of c. 2490-2340 BC, dating the second mound convincingly to the Late Neolithic (whilst not contradicting the 2750 BC date for the initial construction).

Other recent work has focused on the role of the surrounding ditch, which may not have been merely a source of chalk for the hill but a purpose-built moat placed between the hill and the rest of the world.

In March 2007, English Heritage announced that a Roman village the size of 24 football pitches had been found at the foot of Silbury Hill. It contained regularly laid out streets and houses.[13]

On 11 May 2007, contractors Skanska, under the overall direction of English Heritage,[14] began a major programme of stabilisation, filling the tunnels and shafts from previous investigations with hundreds of tons of chalk. At the same time a new archaeological survey was conducted using modern equipment and techniques.[15] The work finished in Spring 2008: a "significant" new understanding of the monument's construction and history had been obtained.[16]

In February 2010, letters written by Edward Drax concerning the 1776 excavation were found in the British Library describing a 40-foot "perpendicular cavity" 6 inches wide. As wood fragments thought to be oak have been found it has been suggested that this may have held an oak tree or a 'totem pole'.[17]

Few prehistoric artefacts have ever been found on Silbury Hill: at its core there is only clay, flints, turf, moss, topsoil, gravel, freshwater shells, mistletoe, oak, hazel, sarsen stones, ox bones, and antler tines. Roman and mediæval items have been found on and around the site since the nineteenth century and it seems that the hill was reoccupied by later peoples. 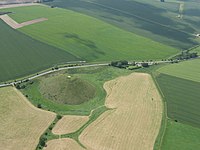 The exact purpose of the hill is unknown, though various suggestions have been put forward:

According to legend, Silbury is the last resting place of a King Sil, represented in a lifesize gold statue and sitting on a golden horse. A local legend noted in 1913[18] states that the Devil was carrying a bag of soil to drop on the citizens of Marlborough, but he was stopped by the priests of nearby Avebury. In 1861 it was reported[19] that hundreds of people from Kennett, Avebury, Overton and the neighbouring villages thronged Silbury Hill every Palm Sunday.

Professor John C. Barret asserts that although we no longer know what was at the top of Silbury Hill and cannot suggest what specific rituals or beliefs were associated with it, we can tease out basic spatial concepts.[20] He notes that any ritual at Silbury Hill would have involved physically raising a few individuals far above the level of everyone else. These few individuals in a privileged position would have been visible for miles around and at several other monuments in the area. This would possibly indicate an elite group, perhaps a priesthood, powerfully displaying their authority.

Writer, artist and prehistorian Michael Dames has put forward a composite theory of seasonal rituals, in an attempt to explain the purpose of Silbury Hill and its associated sites (West Kennet Long Barrow, the Avebury henge, The Sanctuary and Windmill Hill), from which the summit of Silbury Hill is visible.[21]

Jim Leary and David Field (2010) [22] provide an overview of the evolving archaeological information and interpretations of the site and conclude that the actual purpose of this artificial earth mound (Tumulus) cannot be known and the multiple and overlapping construction phases – almost continuous remodelling - suggest there was no blueprint and that the process of building was probably the most important thing of all: perhaps the process was more important than the Hill.

The hill's vegetation is species-rich chalk grassland, dominated by Upright Brome]] and False Oat-grass (''Arrhenatherum elatius''), but with many species characteristic of this habitat, including a strong population of the rare Knapweed Broomrape]]. This vegetation has led to a six-acre area of the site being notified as a Site of Special Scientific Interest in 1965. The site is unique in that its slopes have 360-degree aspects, allowing comparison between growth of the flora on the differently-facing slopes of the hill.