From Wikishire
(Redirected from Bradford on Avon)
Jump to: navigation, search

Bradford-on-Avon is a town in western Wiltshire, a fine place with traces of many ages in it back to a thousand years ago. It had a population of 9,326 at the 2001 census. The town's canal, historic buildings, shops, pubs and restaurants make it popular with tourists.

The history of the town can be traced back to Roman origins. It has several buildings dating to the 17th century, when the town grew due to the thriving English woollen textile industry. The jewel of Bradford on Avon however is a modest-looking building; the Church of St Laurence, a small Anglo-Saxon church and a very rare example of such a church almost unchanged from that age. With its Norman bridge, mediæval tithe barn and mill buildings, Bradford is a fascinating place.

The town bridge is an ancient bridge and has a rare bridge chapel on it. In later ages the chapel was used as the village lock-up, as an overnight cell for drunkards and troublemakers. It is not used today for either purpose.

The town lies partly on the Avon Valley, and partly on the hill that marks the Vale's western edge, eight miles southeast of Bath, in the hilly countryside between the Mendip Hills, Salisbury Plain and the Cotswold Hills. The local area around Bath provides the Jurassic limestone (Bath Stone) from which the older buildings are constructed. The River Avon runs through the town.

The town's name is Old English; bradan ford means "the broad ford". The name is found in the Anglo-Saxon Chronicle, which records that in 652 Cenwalh, King of the West Saxons fought here at Bradanforda be Afne (without saying whom he fought).[1] 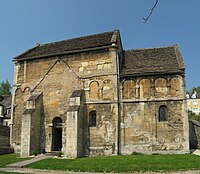 The earliest evidence of habitation is fragments of Roman settlements above the town. In particular, archaeological digs have revealed the remains of a large Roman villa with a well-preserved mosaic on the playing fields of St Laurence School. The centre of the town grew up around the ford across the river Avon, hence the origin of the town's name ("Broad-Ford"). In 652 the West Saxons under Cenwalh fought a battle at Bradford on Avon,[1] perhaps against the Mercians.

In Norman times the stone bridge was built over the river which still stands today. The Norman side is upstream, and has pointed arches; the newer side has curved arches. The Town Bridge and Chapel is a grade I listed building. It was originally a packhorse bridge, but widened in the 17th century by rebuilding the western side.[2]

On 2 July 1643 the town was the site of a skirmish in the Civil War, between Royalists who seized control of the bridge on their way to the Battle of Lansdowne.[3]

On the bridge stands a small building which was originally a chapel but later used as a town lockup. The weather vane on top takes the form of a gudgeon (an early Christian symbol), hence the local saying "under the fish and over the water".

Widbrook Grange is a Georgian manor house on the edge of the town. It was originally built as a model farm on Earl Manvers estate; it is now run as a hotel.

The river provided the power for the wool mills that gave the town its wealth. The town has 17th century buildings dating from the most successful period of the local textile industry. The best examples of weaver's cottages are on Newtown, Middle Rank and Tory Terraces. Daniel Defoe visited Bradford in the early 18th century and commented: "They told me at Bradford on Avon that it was no extra-ordinary thing to have clothiers in that county worth £10,000 to £40,000 per man".

With improving mechanisation in Textile manufacture during the Industrial Revolution the wool weaving industry moved from cottages to purpose built woollen mills adjacent to the river Avon where they used water and steam to power the looms. Around 30 such mills were built in Bradford on Avon alone and prospered further until the English woollen industry shifted its centre of power to Yorkshire in the late 19th century. The last local mill closed in 1905. Many have since stood empty and some became derelict. 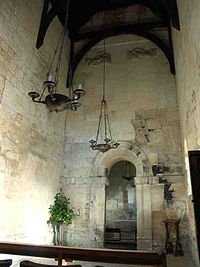 St Laurence's Church in Bradford-on-Avon is an Anglo-Saxon church which may have been founded by Aldhelm, Bishop of Sherborne around 705, and it has been suggested that it was a temporary burial site for King Edward the Martyr. It is one of the most complete Anglo-Saxon buildings in existence.

The church was long forgotten and apparently became a house, a school and part of a factory, but it was re-discovered by Canon William Frampton in 1856. In his research Canon Frampton, who had an interest in archaeology, found reference to the church in the writings of William of Malmesbury. It is suggested that some of the building, containing the blind arcades at a higher level, may belong to a later period[4] while a leaflet available at the church, February 2012, seems to prefer the period 950-1050 for the whole building.

The elaborate ornamentation of the exterior consists of pilaster-strips, a broad frieze of two plain string-courses between which is a blind arcade of round-headed arches whose short vertical pilasters have trapezoidal capitals and bases, while on the eastern gable and the corners adjacent there is a series of mouldings as vertical triple semi-cylinders.[5] Inside the church, high in the wall above a small chancel arch, are the carved figures of two flying angels, the right-hand figure reportedly "intended to be clothed in transparent drapery ... the legs from the knee downward are depicted as showing through the transparent robe" which is referred to as a "quaint fancy".[6] 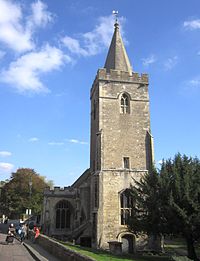 The original parish church, Holy Trinity, stands near the town centre by the river. It is Norman in origin, and it is possible that the chancel was built over the remains of an older church. Several chapels were added on the north side, and the wall in between was later opened up and the chapels now form the north aisle. A squint, or hagioscope, near the altar is claimed to be England's longest. The tower and spire was built around 1480, replacing an older one, and the south wall was largely rebuilt in the 19th century.[7] The church has a ring of eight bells, with the tenor (heaviest bell) weighing 29-2-26 (1.5 tons) and is tuned to Dflat. 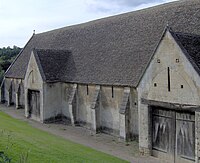 The tithe barn stands fully 180 feet long and 30 feet wide, a huge is a huge mediæval barn and now Grade II* listed. It was built in the 14th century and is now part of Barton Farm Country Park.[8] The barn would have been used for collecting taxes, in the form of goods, to fund the church.

Several notable buildings in and around the town centre have been designated for renovation and redevelopment by 2012.

In 1998 the Wiltshire Music Centre was opened in Bradford on Avon, on the grounds of St Laurence School.

Abbey Mill and the river

The town's main business is retail shopping, tourism and day to day servicing of a population largely made up of families, commuters and the retired.

The town has one mid-sized supermarket, Sainsbury's, situated on the Elms Cross Industrial estate, a two-minute walk from the Canal lock, and five convenience stores.

Local consumers founded Bradford-on-Avon Co-operative Society in 1861, which, in the 1960s, united with other consumer co-operatives in the district to merge with a national business. Though consumer co-operation since left, Bristol workers' co-operative Bishopston Trading Company has a Fairtrade clothing shop in Silver Street, that supports the village of K V Kuppam in India.[9][10][11]

Bradford is on the A363 Trowbridge to Bath road, which runs through the town from south to north. All other road routes are minor, affording access to local settlements.

Bradford-on-Avon railway station is on the Bath to Weymouth railway line. It opened in the mid-19th century and was built by the original Great Western Railway. Northwards the line runs past Avoncliff and Freshford stations, and joins the Great Western main line east of Bath.

Running parallel to the railway through the town is the Kennet and Avon Canal and Bradford Lock. The use of this canal declined as the railways grew but it was restored to full working order during the 1960s, 1970s and 1980s. The canal provides a link through to the Avon at Bath in the west, and the Thames at Reading in the east.