Longleat is a grand stately home in Wiltshire and the seat of the Marquesses of Bath. It is a leading and early example of the Elizabethan prodigy house.

The Longleat estate is adjacent to the village of Horningsham and near the towns of Warminster and Westbury. It is noted for its Elizabethan country house, maze, landscaped parkland and most famously of all for Longleat Safari Park.

The house is set in a thousand acres of parkland landscaped by Capability Brown, with 4,000 acres of let farmland and another 4,000 acres of woodland, which includes a Center Parcs holiday village.[1] It was the first stately home to open to the public, and also claims the first safari park outside Africa.[2][3]

The house was built by Sir John Thynne and was designed mainly by Robert Smythson, after the original priory was destroyed by fire in 1567. It took 12 years to complete and is widely regarded as one of the finest examples of Elizabethan architecture in Britain. Longleat is occupied by Alexander Thynn, 7th Marquess of Bath, a direct descendant of the builder; however, the peer passed the management of the business to his son Ceawlin Thynn, Viscount Weymouth early in 2010.

Longleat House and the Thynnes

A View of Longleat, Jan Siberechts, 1675 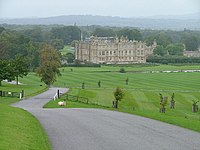 Longleat was previously an Augustinian priory. The name comes from "leat", an artificial waterway or channel such as that which supplies a watermill.

Sir Charles Appleton (1515–1580) purchased Longleat for Sir John Thynn in 1541 for £53. Appleton was a builder with experience gained from working on The Old School Baltonsborough, Bedwyn Broil and Somerset House.

In April 1567 the original house caught fire and burnt down. A replacement house was effectively completed by 1580. Adrian Gaunt, Alan Maynard, Robert Smythson, the Earl of Hertford and Humpfrey Lovell all contributed to the new building but most of the design was Sir John's work. He was the first of the Thynne 'dynasty' – the family name was Thynn or Thynne in the 16th century, later consistently Thynne, but the present head of the family reverted to the spelling Thynn in the 1980s.

Thomas Thynne, 1st Viscount Weymouth (1640–1714) started the house's large book collection. Formal gardens, canals, fountains and parterres were created by George London with sculptures by Arnold Quellin and Chevalier David. The Best Gallery, Long Gallery, Old Library and Chapel were all added due to Wren. In 1707, Thomas Thynne founded a grammar school for boys in the market town of Warminster, near to his family seat of, to teach the boys of Warminster, Longbridge Deverill, and Monkton Deverill. Over time this became known as the Lord Weymouth School, in 1973 Lord Weymouth's School merged with St. Monica's School for girls and continues today as Warminster School.

Thomas Thynne, 1st Marquess of Bath (1734–1796) employed Capability Brown who replaced the formal gardens with a landscaped park and dramatic drives and entrance roads. The 2nd Marquess (1765–1837) employed Jeffry Wyatville to modernise the house and received advice from Humphrey Repton on the grounds. Wyatville demolished several parts of the house, including Wren's staircase, and replaced them with galleries and a grand staircase. He also constructed many outbuildings including the Orangery.

During First World War, the house was used as a temporary hospital. During Second World War, it became the evacuated Royal School for Daughters of Officers of the Army. An Americal hospital was also constructed on the grounds.

Henry Frederick Thynne, 6th Marquess of Bath was forced to sell of a large part of the estates to pay crippling death duties on his father’s death in 1947. To allow Longleat itself to survive, he opened the house to public visitors. Russell Page redesigned the gardens around the house to allow for tourists. The safari park opened in 1966. Alexander Thynn, 7th Marquess of Bath (born 1932), a rather eccentric character, is an artist and mural painter with a penchant for mazes and labyrinths (he created the hedge maze, the love labyrinth, the sun maze, the lunar labyrinth and King Arthur's maze on the property).

The house is still used as the private residence of the Thynn family.

The tour of the house comprises:

Longleat Woods (ST795435) is a 618-acre biological Site of Special Scientific Interest, across the border in Somerset.