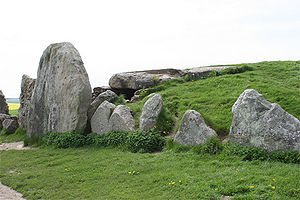 The West Kennet Long Barrow is a Neolithic tomb or barrow, situated on a prominent chalk ridge, near Silbury Hill, one-and-a-half miles south of Avebury in Wiltshire. The site was recorded by John Aubrey in the 17th century and by William Stukeley in the 18th century.

Archaeologists classify it as a chambered long barrow and one of the Severn-Cotswold tombs. It has two pairs of opposing transept chambers and a single terminal chamber used for burial. The stone burial chambers are located at one end of one of the longest barrows in Britain at over a hundred yards: in total it is estimated that 15,700 manhours were expended in its construction. The entrance consists of a concave forecourt with a facade made from large slabs of sarsen stones which were placed to seal entry.

The construction of the West Kennet Long Barrow commenced about 3600 BC, which is some 400 years before the first stage of Stonehenge, and it was in use until around 2500 BC. The mound has been damaged by indiscriminate digging, but archaeological excavations in 1859 and 1955-56 found at least 46 burials, ranging from babies to elderly persons. The bones were disarticulated with some of the skulls and long bones missing. It has been suggested that the bones were removed periodically for display or transported elsewhere with the blocking facade being removed and replaced each time. Recent re-analysis of the dating evidence suggests that the 46 people all died within 20 - 30 years of each other, and that the tomb was open for 1,000 years.

The latest excavations also revealed that the side chambers occur inside an exact isosceles triangle, whose height is twice the length of its base. Artefacts associated with the burials include Neolithic Grooved ware similar to that found at nearby Windmill Hill.

It is thought that this tomb was in use for as long as 1,000 years and at the end of this period the passage and chamber were filled to the roof by the Beaker people with earth and stones, among which were found pieces of Grooved ware, Peterborough ware and Beaker pottery,[1] charcoal, bone tools, and beads. Stuart Piggott, who excavated this mixture of secondary material, suggested that it had been collected from a nearby 'mortuary enclosure' showing that the site had been used for ritual activity long after it was used for burial. The finds from the site are displayed at the Wiltshire Museum in Devizes, including some of the most impressive beakers from Britain.