Littlecote House is a large Elizabethan country house and estate in eastern Wiltshire, standing on the banks of the River Kennet between Ramsbury and Chilton Foliat, close to the county’s border with Berkshire. The closest town is Hungerford in the latter county.

The house is in the heart of the North Wessex Downs Area of Outstanding Natural Beauty.

Littlecote House itself is a Grade I listed building.[1]

The estate includes 84 acres of historic parklands and gardens, including a walled garden from the 17th and 18th centuries. In its grounds is Littlecote Roman Villa.

The first Littlecote House was built during the 13th century. A mediæval mansion, it was inhabited by the de Calstone family from around 1290. When William Darrell married Elizabeth de Calstone in 1415, he inherited the house. His family went on to build the Tudor mansion in the mid-16th century. King Henry VIII courted Jane Seymour at the house; her grandmother was Elizabeth Darrell.

Sir John Popham bought the reversion of Littlecote, and succeeded to it in 1589; he built the present Elizabethan brick mansion, which was completed in 1592. Elizabeth I, James I, Charles II, and William of Orange all stayed there, William on his march from Torbay to London in the Glorious Revolution. Popham's descendants, the Pophams and (from 1762) the Leyborne Pophams owned the house until the 1920s. The Leyborne Pophams refurbished much of the house in 1810. They retained it until 1929, when the house was purchased by Sir Ernest Wills, 3rd Baronet. 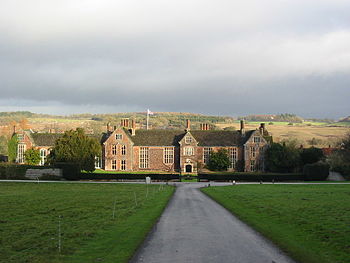 The house from drive

During the Second World war 1941-2, the house was the Headquarters of 34th Army Tank Brigade, commanded by Brigadier J Noel Tetley. Then in September 1943 the US 101st Airborne Division requisitioned part of the house, and it became home to regimental staff, regimental headquarters company, and headquarters company of the 1st Battalion, 506th Parachute Infantry Regiment. The house provided office space and sleeping quarters for 506th officers with the best rooms being allocated to Col. Robert F. Sink, Regimental Commander and Lt. Col. Charles H. Chase, his executive officer.[2] The colonel used the library as his office, and a memorial plaque can now be found in this room. From airfields in this area, including Ramsbury just to the west of here, the Airborne Division took off during the night of 5 June 1944, the eve of D-Day, as part of the invasion of Normandy. Easy Company from this regiment have become famous through the book and TV mini-series Band of Brothers.[3] All other ranks lived in Nissen huts built alongside the main drive between the house and the east lodge.

After the war, the owner's younger son, Seton Wills, inherited the estate and sold the house to the entrepreneur Peter de Savary in 1985. On New Year's Eve 1992-1993, the grounds were used for an all night rave run by Fantazia (dance).[4]

In 1996, Warner Holidays acquired the house and estate and now operate it as a country house hotel and resort.

The last of the Darrell owners is connected with several scandals and the house's resident ghost story. William Darrell's father had left the house to his mistress Mary Danyell, but Darrell was able to recover it when he came of age in 1560. He spent lavishly, left his debts unpaid, and went to law with most of his neighbours, acquiring enemies in the process. Sir John Popham was his relative and lawyer.

Darrell’s adulterous liaison with Anne Hungerford, the wife of his neighbour Sir Walter Hungerford, Knight of Farley, led to a scandal and grim stories: when Sir Walter sued for divorce, she was acquitted, and Sir Walter sent to prison. Some years later, Mother Barnes, a midwife from Great Shefford, recalled being brought blindfold in 1575 to the childbed of a lady, with a gentleman standing by who commanded her to save the life of the mother, but who threw the newborn child into the fire. Barnes did not name or indicate either Darrell or Littlecote, but his enemies quickly ascribed this murder to him.[5]

Darrell's financial troubles increased, and he mortgaged Littlecote, first to Sir Thomas Bromley, and then to Popham. He moved to London and spent some time in a debtors' prison, but died in 1589 after a riding accident while visiting Littlecote. Legend has it that whilst hunting, the ghost of the murdered newborn appeared to him, causing his horse to shy and throw him. Darrell is said to haunt the site of his death, known as Darrell's stile (or Style, as well as the church at Ramsbury, two miles away), although one famed clairvoyant, Tom Corbett, detected nothing of the sort. He did sense the presence of a woman in the garden, whom he believed to be Mrs Leyborne Popham, and another ghost in the Chinese bedroom he termed a "busybody", a word Mrs. Wills, wife of the then owner Major George Wills, agreed described the presence in that room. Another possible ghost is that of a past tenant, Gerard Lee Bevin (or Bevan), who lived at Littlecote after First World War and later served time for embezzlement. His presence has been felt in the Long Gallery.[6]

Rumour managed to increase this scandal, suggesting that the sale of the estate was fictitious to avoid confiscation if Darrell were ever convicted, and that Popham kept Littlecote from Darrell's heirs (which he did not have). John Aubrey tells that Littlecote was a bribe to Popham as his judge in a criminal case, which is impossible: Darrell was not charged or tried, and Popham was not yet a judge.[7] Nevertheless, this story was borrowed by Sir Walter Scott, in Rokeby, and by Charles Dickens, in A Tale of Two Cities.[8]

Littlecote House from the rear lawn 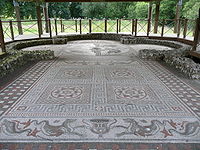 In the grounds is Littlecote Roman Villa, the site of a Roman winged corridor villa and associated religious complex. It has been archaeologically excavated under the direction of Bryn Walters, and is on display to the public.