Wardour Castle is a castle at Wardour, near Tisbury in Wiltshire, about 15 miles west of Salisbury. The original castle was partially destroyed during the Civil War. It is managed by English Heritage who have designated it as a Grade I listed building,[1] and is open to the public.

The castle was built on land previously owned by the St Martin family, but when Sir Lawrence de St Martin died in 1385 it was handed over to John, the fifth Baron Lovell for reasons unknown. It was built using locally quarried Tisbury greensand,[2] with William Wynford as the master mason, after Baron Lovell had been granted permission by Richard II in 1392.[3] It was inspired by the hexagonal castles then in fashion in parts of the Continent, particularly in France; but its own six-sided design is unique in Britain, as is its inclusion of several self-contained guest suites.

After the fall of the Lovell family following Francis Lovell's support of Richard III, the castle was confiscated in 1461 and passed through several owners until bought by Sir Thomas Arundell of Lanherne in 1544.[3] The Arundells were of an ancient Cornish family, with wide estates in Wiltshire. The castle was confiscated when Sir Thomas — a resolute Roman Catholic — was executed for treason in 1552, but in 1570 was bought back by his son, Sir Matthew Arundell, later a Sheriff and Custos Rotulorum of Dorset.[4] The Arundells, led by Thomas Arundell, 1st Baron Arundell of Wardour, subsequently became known as some of the most active of the Romanist landowners in England at the time of the Reformation; thus they were naturally Royalists in the Civil War. During that conflict, Thomas Arundell, 2nd Baron Arundell of Wardour, was away from home on the King’s business and had asked his wife, Lady Blanche Arundell, aged 61, to defend the castle with a garrison of 25 trained fighting men. On 2 May 1643 Sir Edward Hungerford, with 1,300 men of the Parliamentarian Army, demanded admittance to search for Royalists. He was refused and laid siege, setting about the walls with guns and mines. After five days the castle was threatened with complete destruction. Lady Arundell agreed to surrender, and the castle was placed under the command of Colonel Edmund Ludlow. Lord Arundell had died of his wounds after the Battle of Lansdowne, and his son, Henry 3rd Lord Arundell, next laid siege to his own castle, blew up much of it and obliged the Parliamentary garrison to surrender in March 1644.[3]

The family slowly recovered power through the Commonwealth and the Glorious Revolution, until the eighth Baron, Henry Arundell, borrowed sufficient funds to finance rebuilding. This was done by the prominent Palladian James Paine. Paine built Wardour New Castle, but left the Wardour Old Castle as an ornamental feature. In stylistic terms the New Castle is not a castle at all, but a symmetrical neoclassical country house with a main block built around a central staircase hall and two flanking wings. Paine integrated the ruins of the Old Castle into the surrounding parkland, intending it to be viewed as a romantic ruin.

The castles, old and new, have been featured in several films. The Old Castle appeared in the 1991 Kevin Costner feature Robin Hood: Prince of Thieves, and the New Castle served as the dance school in Billy Elliot. The cover of Sting's album Ten Summoner's Tales was photographed inside Old Wardour Castle.

The castle's ground level was dramatically altered around the 18th century. In the Middle Ages, it sloped away much more steeply so that the building stood on the end of a low ridge of land. The approach to the main front door is supposed to have been protected by a wide ditch crossed by a drawbridge, with a portcullis, though there have been no surviving remains of these.[5] Between the towers at the level of the battlements are the remains of a projecting gallery or barbican which would have been used to defend the front entrance. Above the portal over the front entrance is the Arundell coat-of-arms and a description of the Arundell's possession of Wardour, erected by Sir Matthew Arundell in 1578 to celebrate his recovery of the property after the family lost it when Sir Thomas Arundell was executed in 1552. Above the coat of arms is the head of Christ in a niche with the inscription: Sub nomine tuo stet genus et domus.[6]

When the south-west side of the castle was blown out in an explosion in the 17th century, the courtyard would have changed from a dark and claustrophobic place to a light, spacious sanctuary. It would have been in the shape of a hexagon, and there would have been four or five storeys formed around it on all sides. In the 1570s, most of the original mediæval windows and doors would have been replaced. In the centre of this interior courtyard, there is a well. Evidence gathered from other castles from the same era suggests that there would have been an elaborate and impressive roof over the well, carved and painted with the emblems of the Lovells and the Arundells. 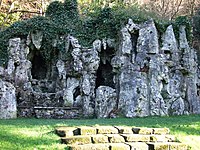 The Grotto of Old Wardour Castle was the last addition to the landscape. It was built in 1792 by Josiah Lane of Tisbury, who at the time was a well-known builder of garden ornaments and other grottos in the area. He was commissioned to build the artificial cave, complete with dripping water, fossils and ferns from brick, plaster and stone from the ruins of the castle.[7] The grotto also incorporates three standing stones, removed from the stone circle at Tisbury.[8]

The Arundells returned to Old Wardour in the 1680s after having been forced to leave the castle in 1644. They built a new, smaller house just outside the castle wall which was known as the Banqueting House. It was another 100 years before they built and moved into New Wardour Castle, so in the meantime the family began to develop the grounds around the Old Castle. The Banqueting House was built in around 1773-4 in the mock-Gothic style that was popular at the time, as a hall where the Arundells could entertain their guests. The House had a coloured fireplace of marble brought from the smaller house, and the stained glass in the windows is believed to have come from the New Wardour Castle, when the chapel there was refurbished in 1786. It is thought that the Banqueting House was designed and partially built by James Paine, a local craftsman who was also commissioned to design the New Wardour House.

At the top of the stairs leading from the courtyard, any mediæval visitor would have found themselves in a passageway that, on the left, led into the Great Hall behind a wooden screen with arched openings. This room was the formal heart of the castle, where the whole household would meet for feasts and special occasions. The walls were covered in rich fabrics that concealed machinery that controlled the two portcullises. Matthew Arundell refurbished the Great Hall in the 1570s. A new musicians' gallery was built above the wooden entrance screen. The fireplace was reshaped and new wooden panels were put in place of the wall hangings and banners. The doorway leading from the Great Hall into the Lobby was also redesigned at this point of time.[5] However, he left untouched the tall windows and the old wooden roof, and it is thought that he did this to preserve what was Lord Lovell's great castle.

The Lobby was a narrow room which was used to entertain guests with sweetmeats after the meal while the tables were being cleared in the Great Hall to create space for dancing. Such spaces were popular features of mediæval houses. Matthew Arundell had the room fitted with new fireplaces in the 1570s and altered the stairs in the North Tower at the same time to give a more private approach to the upper rooms.

Today, very little remains of the upper rooms, which once would have been the most inviting part of the castle. Like the Great Hall, they were high rooms with intricate wooden roofs. Each room would have had two tall windows looking out upon the landscape and a third looking into the courtyard. By 1605, the upper rooms had been converted to a gallery, a long room with many windows, as was popular in the upper floors of Elizabethan houses.