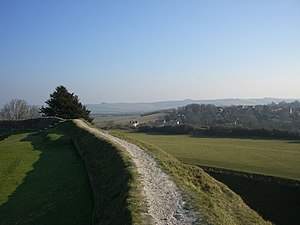 Old Sarum is the site of the earliest settlement of Salisbury in Wiltshire. It was an Iron Age site, a Roman town, named Sorviodunum, an Anglo-Saxon city, Searoburg, and a mediæval cathedral city until the foundation of New Sarum, today's Salisbury, in 1219.

The site contains evidence of human habitation as early as 3000 BC. Old Sarum is mentioned in some of the earliest records in the country. It is located on a hill about two miles north of modern Salisbury next to the A345 road.

Old Sarum was originally an Iron Age hill fort strategically placed on the conjunction of two trade routes and the River Avon. The hill fort is broadly oval shaped, measuring 1,300 ft in length and 1,200 ft in width; it consists of a double bank and intermediate ditch with an entrance on the eastern side.

The site was used by the Romans]], becoming the town of Sorviodunum. The Saxons settled heer and employed its defences as a stronghold against marauding Norsemen, and the Normans built a stone curtain wall around the Iron Age perimeter and a centrally placed castle on a motte protected by a deep dry moat. A royal palace was built within the castle for King Henry I and subsequently used by Plantagenet monarchs. A Norman cathedral and bishop's residence were built at the western end of the town.

In 1219, the cathedral was demolished in favour of the new one built near the river and the townspeople moved down to the new city, then called New Salisbury or New Sarum. The castle fell out of use and was sold for materials by King Henry VIII.

By the 19th century, the settlement was officially uninhabited and yet still had formal parliamentary representation, making it the most notorious of the rotten boroughs that existed before the Reform Act 1832.

It is now an English Heritage property and open to the public. 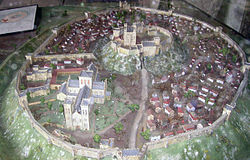 The hill was not always known as Old Sarum, and indeed it is "Old" only because Salisbury is the "New" Sarum, or at least it was new eight hundred years ago.

The original British name is unknown but is echoed in the Roman name Sorviodunum. The coming of the English brought it a new name, the Welsh dun becoming an English burg, and it became Searoburg (or Searobyrig in the dative and genitive cases).

In the Domesday Book Searoburg is recorded as Sarisburia, and at some time in succeeding centuries the "r" became an "l" to produce "Salisbury".

The form "Sarum" appears to be from the Latin form, in which the old name "Sarisburg" was abbreviated to Saŕ, read later as "Sarum".

Archaeological remains of rough stone tools suggest people have occupied the hilltop area of Old Sarum since Neolithic times (around 3000 BC).[1] There is evidence that early hunters and, later, farming communities occupied the site. A protective hill fort was constructed by the local inhabitants during the Iron Age (around 500 BC) by creating enormous banks and ditches surrounding the hill. Numerous other hillforts of the same period can be found locally, including Figsbury Ring to the east and Vespasian's Camp to the north.

The archaeologist Sir Richard Hoare described it as "a city of high note in the remotest periods by the several barrows near it, and its proximity to the two largest stone circles in England, namely, Stonehenge and Avebury."[2]

In the Roman occupation of Britain between AD 43 and 410, the site was a military station, strategically placed near the convergence of five important roads. The hill fort was marked on Roman documents by the name of Sorviodunum. The name is believed to be derived from the British language name for 'the fortress by a gentle river'.[3] In the Brut y Brenhinedd ("Chronicle of the Britons",[4] the place is referred to as Caer Gradawc.

Cynric, King of the Gewissae, captured the hill in 552.[5] The Anglo-Saxons called it Searobyrig[5] and under them it ranked among the most considerable towns of Wessex, gaining ecclesiastical establishments soon after the conversion of the Saxons to Christianity.[6] In the early part of the ninth century, it was a frequent residence of Egbert of Wessex, and, in 960, King Edgar assembled a national council there to plan a defence against the Danes in the north.[7] 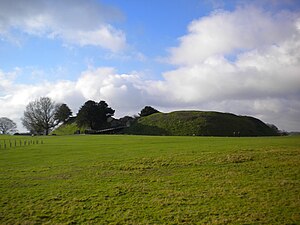 The castle motte seen from the east 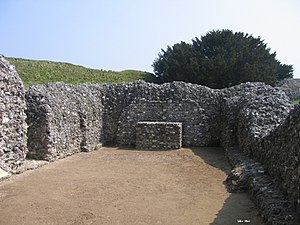 Ruins of the Royal Palace

A motte and bailey castle was built in around 1069, three years after the Norman conquest, and the town was renamed. It is listed in the Domesday Book as Sarisburia, from which the names Sarum and Salisbury are derived.[3] In 1086, William the Conqueror convened the prelates, nobles, sheriffs and knights of his dominions at Old Sarum to pay him homage.[8] It is probable that part of the Domesday Book was also written at this time. Two other national councils were held there; one by William Rufus, in 1096, and another by Henry I in 1116. 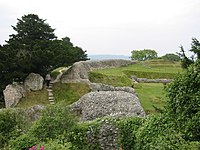 The construction of a cathedral and bishop's palace occurred between 1075 and 1092, during the time of Bishop Osmund. However, only five days after the cathedral was consecrated, a storm destroyed the tower roof. The final completion of the cathedral was left to the third bishop of Old Sarum, Roger of Salisbury, chancellor to King Henry I. He also oversaw the construction, between 1130–1139, of a stone Royal Palace on the castle motte.

A contemporary observer, Peter of Blois (c.1135–1203) described Old Sarum as "barren, dry, and solitary, exposed to the rage of the wind; and the church (stands) as a captive on the hill where it was built, like the ark of God shut up in the profane house of Baal."[9] Henry II of England held his wife, Eleanor of Aquitaine, prisoner at Old Sarum. 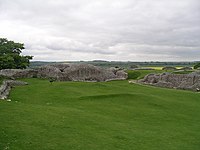 Remains of keep and royal palace 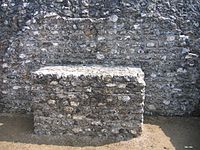 Altar inside the ruined chapel

By 1219, the limitations of space on the hilltop site had become cause for concern, with the cathedral and castle in close proximity and their respective chiefs in regular conflict. When Bishop Poore's men were held out of the hill-fort by the King's men, Poore formally requested the cathedral's relocation.

The site of a new cathedral was consecrated later that year, and in 1220 the bishop started construction on the banks of the Avon. A new settlement grew up around it, called New Salisbury or New Sarum — eventually adopting the name of its predecessor to become known as "Salisbury". By 1217, the inhabitants of Old Sarum had removed their residence, and constructed their new habitations with the materials they razed from their old. As one city increased in population and extent, so the other almost as rapidly decayed.

From the reign of Edward II in the 14th century, the Borough of Old Sarum elected two members to the House of Commons, despite the fact that from at least the 17th century it had no resident voters at all. One of the members in the 18th century was William Pitt the Elder. In 1831 it had eleven voters, all of whom were landowners who lived elsewhere. This made Old Sarum the most notorious of the rotten boroughs. The Reform Act 1832 completely disfranchised Old Sarum.

Several books of historical fiction capture the flavour of life in mediæval England with specific attention to Salisbury. Among them: