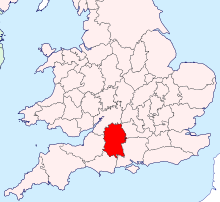 The "Bustard flag" was created by Mike Prior and designed by Helen Pocock, a graphic designer, in 2007. It is partly based on the flag of the Wiltshire Council, including the alternating stripes of green and white that represent the grassy downs of the county and their chalk underlay. The colours can represent hope, joy and safety (green) and peace (white). Although distinct, the complicated and irregular design has been met with some criticism by flag designers and heraldists.

An image of the Great Bustard (Otis tarda) stands at the centre of the flag. This bird had been extinct in England since 1832, but is now part of an intensive breeding programme on Salisbury Plain. Salisbury Plain, at the heart of the county, is one of only two areas in Great Britain in which the Great Bustard originally lived. On the flag, the male Great Bustard is depicted in gold on a solid green circle to represent the open grassland. The border of the circle, in six sections alternating green and white, represents the stone circles of Stonehenge and Avebury in the county. The six portions are also represent the six surrounding counties of Gloucestershire, Oxfordshire, Berkshire, Hampshire, Dorset and Somerset.

The technical specification of the flag is that it is a 3:5 ratio, and is manufactured in green and gold onto a white material.

Although Mike Prior admits that there "is no method or authority to get it accepted as the county flag of Wiltshire, that is all done by public acceptance."[2], the flag received the support of Wiltshire Council, and was flown at Wiltshire County Hall in Trowbridge in June 2007.[3][4]

The "Great Bustard" flag was first raised in Trowbridge by Lord Bath in September 2006 and was later flown by Jane Scott, leader of the former county council, at County Hall, Trowbridge, on 5 June 2007.

At a full meeting of the Wiltshire Council on December 1, 2009, the Great Bustard flag was formally approved as the County Flag.[5]

June 2011 saw the Wiltshire Flag flown for one week above the Department of Communications government building in London. This was highly and positively publicised by Matthew Smith on BBC Wiltshire Radio Breakfast Show.