King Alfred's Tower, also known as The Folly of King Alfred the Great or Stourton Tower, is a folly tower. It is in the parish of Brewham in Somerset, and was built as part of the Stourhead estate and landscape.

The tower stands on Kingsettle Hill within yards of Somerset's border with Wiltshire and today it belongs to the National Trust. It is designated as a grade I listed building.[1]

Henry Hoare II planned in the 1760s the tower to commemorate the end of the Seven Years' War against France and the accession of King George III near the location of 'Egbert's stone' where it is believed that Alfred the Great, King of Wessex, rallied the Saxons in May 878 before the important Battle of Edington. It was damaged by an aeroplane in 1944 and restored in the 1980s.

The tower is 160 feet high and triangular in cross-section. It is hollow centre and may be climbed by means of a spiral staircase in one of the corner projections. It includes a statue of King Alfred and dedication inscription.

The tower stands near the location of 'Egbert's stone' where it is believed that Alfred the Great, King of the West Saxons rallied the English in May 878 before the important Battle of Edington (or Ethandun). At this battle the Danish army, led by Guthrum the Old was defeated.[2][3] It marked the end of the Danish conquest of England and the beginning of the English reconquest of Britain, completed by Alfred's son and grandson.

The tower today is the start of the Leland Trail, a 28-mile footpath which runs from King Alfred's Tower to Ham Hill Country Park.[4]

The project to build the tower was conceived in 1762 by the banker Henry Hoare II (1705-1785).[5] The tower was also intended to commemorate the end of the Seven Years' War against France and the accession of King George III.[6]

Alfred's Tower is a monument to the genius of English landscape, many of whose loveliest haunts it commands, and to a man who certainly deserves to be remembered as among the great benefactors of the English scene. - Christopher Hussey, Country Life, 11 June 1938.[7]

In 1765 Henry Flitcroft, a Palladian architect, designed the tower.[3] Building began in 1769 or early 1770, and was completed in 1772 at an estimated cost between £5,000 and £6,000.[6] There may have been some delay due to difficulty in obtaining the bricks.[8] In addition to the commemorative function, the tower was also intended to serve as an eye-catching focus for those touring the parkland of the Stourhead Estate.[9][10] In April 1770, when the tower was just 15 feet (5 m) high, Hoare is quoted as saying: 'I hope it will be finished in as happy Times to this Isle as Alfred finished his Life of Glory in then I shall depart in peace.'[11]

The tower was damaged in 1944 when an aeroplane, coincidentally a Noorduyn Norseman, crashed into it, resulting in the death of the five aircrew and damage to the highest 30 feet of the tower.[12][13][14] The tower was restored in 1986, which included the use of a heavy-lifting helicopter, appropriately a Westland Wessex, to lower a 47-stone stone onto the top. The statue of King Alfred was also restored at this time, including the replacement of his missing right forearm.[6] 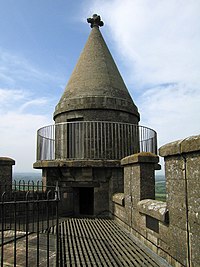 The triangular tower is 160 feet high with a girth of 167 feet. Each of the three corners of the triangular structure has a round projection.[1] The centre of the tower is hollow and to stop birds from entering the space a mesh has been added at roof level. The viewing platform, which has a crenellated parapet and offers a view over the surrounding countryside, is reached by a 205-step spiral staircase at the corner furthest from the entrance.[3] The brick tower has Chilmark stone dressings and is surmounted by an embattled parapet.[15][16]

The 'front' (south-east) face of the tower has a Gothic-arched entrance door, a statue of King Alfred, and a stone panel bearing an inscription (see below). This is the face that most visitors see first when walking from Stourhead garden or from the nearby car park.

Around the Stourhead estate are several inscriptions. The one on the tower was drafted in 1762 and installed in 1772.[17] The stone tablet above the door on the east face of the tower reads: