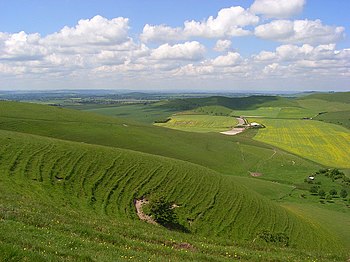 The Marlborough Downs are a range of high chalk uplands hills which sweeps across the north of Wiltshire, south of the Upper Thames Valley and north of the Vale of Pewsey, which divides the downs from Salisbury Plain. The River Kennet rises in these hills and forms a valley down to Marlborough in their midst.

This is a hauntingly beautiful landscape of open hills, broad valleys and clear airs. It is full of mystery, littered with earthworks, stone circles and hillforts of forgotten peoples. Richard Jefferies described it as being "alive with the dead". The Ridgeway, a path of ancient origin passes over the ridge tops here and the barrows of ancient burials are strewn across the hills.

The downs are quiet as no major route passes through, and most travellers bypass the area entirely.

The highest point in the Marlborough Downs is Milk Hill, also Wiltshire's county top, at 967 feet, beside its neighbour almost as tall, Tan Hill. The Wansdyke runs by here, on the north side of the two hills.

The hills of the Marlborough Downs are a counterpart to the neighbouring Berkshire Downs to the east in Berkshire, and effectively form part of the same range, some time known as the 'North Wessex Downs'. 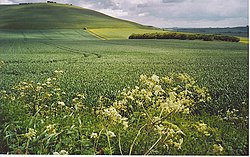 The high chalk plateau forms an expansive landscape of open, smoothly rolling downland, mostly under intensive arable farming but with areas of remnant chalk grassland on steeper slopes and on conservation sites such as Fyfield Down. It is heavily dissected by a network of dry chalk valleys, or combes, and the valleys of the River Kennet and those of the Rivers Og, and Aldbourne which cut through the area from north to south. Horse gallops and other features of the racing industry are distinctive features of the area.

The dominant geology is the rocks of the Middle and Upper Chalk which form the upland block of the downs and create the dramatic northern escarpment of the range. The dip slope dtrops gently toward the southeast and as a result the Middle Chalk outcrops more in the north and west, together with the Lower Chalk northwest of Ogbourne St George. Further south east these rocks give way to the Upper Chalk.

The chalk gives rise to a strongly rolling landscape which includes long sinuous scarps and dry valleys in addition to open downs and ridges.

In a number of places the chalk is overlaid with flint. Sarsen stones priod fro the ground too, in particular at Fyfield Down.

There are several traces of the Neolithic here, concentrated on the higher ground forming the eastern perimeter of the Avebury Plain. Neolithic long barrows are to be found along the higher downs, as along the brow of the escarpment above the Avebury Plain. Archaeological evidence indicates that New Stone Age man persistently cleared woodland hereabouts throughout their period.

The Bronze Age was more on the landscape; hundreds of round barrows are recorded within the area. Bronze Age field systems have been found where the Rivers Kennet and Og meet, and in the the complex across Rockley Down and Dean Bottom.

The Iron Age is eveidnced by hill forts such as Barbury Hill. There was a Romano-British village at Mildenhall, named Cunetio, but otherwise there is little of distinctly Roman character here.

The road between Mildenhall and Cirencester survives as a combination of tracks, lanes and the A346 to this day. There is little evidence to suggest that the area was significantly occupied during the Saxon period.

During the 19th century records indicate that almost the entire area was arable, but by the 1930s this was only about a third of the available farmland.

The largest town in the downs is Marlborough itself, though at the foot of the hills rather than among them. Otherwise Aldbourne is the largest village, remote in the downland. It has a secretive setting nestled in a fold in the hills, but confident in its self-sufficiency, bearing continuous built frontages to many of the streets, with a square in the centre and a large village green behind, dominated by the church.

A line of villages follow the River Og and the Roman road to Winchester, named from the river as Ogbourne St Andrew, Ogbourne St George and Ogbourne Maizey. Historically, these were all fairly small settlements, and have expanded with linear development in the mid 20th century, partly owing to their position on the main Swindon road.

Landmarks of the downs