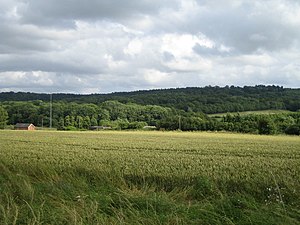 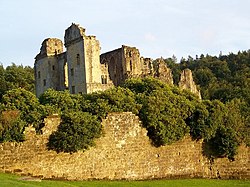 The Vale of Wardour is a valley of Wiltshire, which lies between the West Wiltshire Downs to the north and the chalk escarpment and the rolling chalk escarpments edging Salisbury Plain to the south. It is a rolling clay valley with a mixture of pasture and arable land, in the midst of which runs the River Nadder, between Shaftesbury in Dorset in the west and the meadows of Salisbury in the east, where the Nadder joins the River Avon.

The vale forms a wedge, broad against the Dorset border, narrowing to a point towards Salisbury.

The edges of the Vale of Wardour are marked by greensand hills, patchworked with woodland, and a mosaic of pasture and woodland.

Within the Vale, the haunting ruins of Wardour Castle are a prominent landmark, and several great houses and their parks stand in the vale. Stone has been quarried here, yielding the distinctive look of many if the villages of the vale. Along the centre, by the banks of the Nadder are water meadows, and across the vale a network of ancient paths.

Natural England has declared 'Blackmoor Vale and Vale of Wardour', stretching across Wiltshire and Dorset to be 'National Character Area 133'.