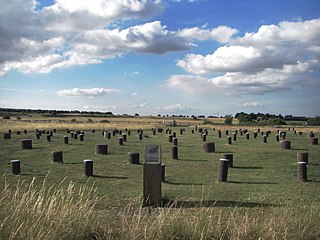 Woodhenge on Salisbury Plain in Wiltshire is the site of a Neolithic timber circle. It forms one of the ancient monuments and landscape designated the 'Stonehenge, Avebury and Associated Sites' World Heritage Site. It is to be found at SU150434, 2 miles northeast of Stonehenge, in the parish of Durrington, just north of Amesbury.

The ancient posts which one stood circling here have rotted away millennia ago, but the post holes remain and are today marked, and in a manner preserved, by the placing of concrete posts in their locations. The monumnent has been classified a 'Class II henge and timber circle monument'

Woodhenge was identified in 1925 after an aerial archaeology survey by the archaeologists Alexander Keiller and OGS Crawford. Crawford credits the discovery to an aerial photograph taken by Squadron Leader Gilbert Insall, VC, in 1925.[1] Maud Cunnington excavated the site, originally known as Dough Cover, between 1926 and 1929.[2]

Pottery from the excavation was identified as being consistent with the grooved ware style of the middle Neolithic, although later Beaker sherds were also found. So, the structure was probably built during the period of cultural similarities commonly known as the Beaker. The Beaker culture spans both the Late Neolithic and Britain's Early Bronze Age and includes both the distinctive "bell beaker" type ceramic vessels for which the cultural grouping is known as well as other local styles of pottery from the Late Neolithic and Early Bronze Age.

While construction of the timber monument was probably earlier, the ditch has been dated to between 2470 and 2000 BC, which would be about the same time as, or slightly later than, construction of the stone circle at Stonehenge.[3] Radiocarbon dating of artefacts shows that the site was still in use around 1800 BC.[4]

The site consists of six concentric oval rings of postholes, the outermost being about 140 feet by 130 feet wide. They are surrounded first by a single flat-bottomed ditch, 8 feet deep and up to 40 feet wide, and finally by an outer bank, about 30 feet wide and 3 feet high.[2] The overall diameter is 360 feet, and the site had a single entrance to the northeast.[4] 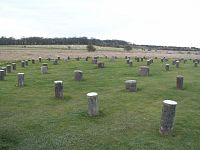 At the centre of the rings was a crouched inhumation of a child, which Cunnington interpreted as a dedicatory sacrifice. After excavation, the remains were taken to London, where they were destroyed during The Blitz, making further examination impossible. Cunnington also found a crouched inhumation of a teenager within a grave dug in the Eastern section of the ditch, opposite the entrance.[2]

Most of the 168 post holes held wooden posts, although Cunnington found evidence that a pair of standing stones may have been placed between the second and third post-hole rings. Recent excavations in 2006 have indicated that there were at least five standing stones on the site,[3] arranged in a "cove". The deepest post holes measured up to 6.6 feet (2.0 m) – and are believed to have held posts which reached as high as 25 feet above ground. Those posts would have weighed up to 5 tons, and their arrangement was similar to that of the bluestones at Stonehenge. The positions of the postholes are currently marked with modern concrete posts – a simple and informative method of displaying the site.

Further comparisons with Stonehenge were quickly noticed by Cunnington – both have entrances oriented approximately to the midsummer sunrise, and the diameters of the timber circles at Woodhenge and the stone circles at Stonehenge are similar.

Relationship with other monuments

Over 40 years after the discovery of Woodhenge, another timber circle of comparable size was discovered in 1966. Known as the Southern Circle, inside of what came to be known as the Durrington Walls henge enclosure, located only 75 yards north of Woodhenge.

There are various theories about possible timber structures that might have stood on and about the site, and their purpose, but it is likely that the timbers were freestanding, rather than part of a roofed structure.[3] For many years work on the study of Stonehenge had overshadowed any real breakthroughs in the understanding of Woodhenge. Recent ongoing investigations as part of the Stonehenge Riverside Project are now starting to cast new light on the site and on its relationship with neighbouring sites and Stonehenge.

Theories have emerged in which the sites may all be integrated into an overall layout, in which the structures were linked by roads, and which incorporated the natural features of the River Avon. One wild suggestion is that the use of wood vs. stone may have held a special significance in the beliefs and practices involving the transformation between life and death.[2]