Trafalgar House, also known as Trafalgar Park, is a country house south of Salisbury, in Wiltshire. It is popular for events such as weddings, corporate meetings and charity fundraisers. In recent years, it has also been used as a set for film scenes.

The estate was formerly called Standlynch Park.[1] The earliest known record of the estate is in the Domesday Book of 1086.[2] The Beauchamp family owned Standlynch Manor during the Tudor period, after which it was bought by the Greene family. This owned it until the 17th century, when it was acquired by the Buckland family.[1]

Standlynch Manor was bought by Sir Peter Vandeput in 1726.[1] Three years later, he had John James design what would eventually become the Trafalgar Park which can be seen today.[3] Sir Peter died in 1748, bequeathing the estate to his son George, who in 1752 sold it to Sir William Young. Henry Dawkins then bought it from Young in 1765.[1]

In 1766 Henry Dawkins had John Wood design pavilions to the north and south of the building. He also had Nicholas Revett add a stone portico and remodel the internal architecture of the north wing. The music room was redecorated by Giovanni Battista Cipriani.[4] Dawkins died in 1814, and the estate was presented to the heirs of Nelson.[1] 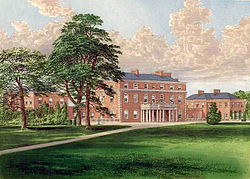 The next events to alter the estate began far off, in the cataclysmic sea fight at Trafalgar on 21 October 1805, at which Admiral Horatio Nelson triumphed and fell. The thanksgiving of the nation and grief for its fallen hero, who left a widow but no legitimate offspring,[5] was an opportunity for the Admiral's elder brother, the Rev William Nelson. He received his late brother's titles and he pushed for an estate to be granted in honour of Nelson's final act of bravery and his great victory. Parliament bought Standlynch Park in 1814 and it was renamed Trafalgar Park.[6]

After William Nelson’s death, his nephew Thomas Bolton changed his name to Nelson and inherited the property. When he died less than a year later, his 12-year-old son Horatio inherited the estate in 1836. Horatio went to great lengths to ensure that the estate was well maintained; he commissioned a new garden and renovation of Standlynch Church.[1]

Trafalgar Park remained within this family until the first half of the 20th century. In 1948 the estate was sold to John Osborne]], whose son-in-law Oliver Lyttleton]] lived there while he was a Member of Parliament. Eventually Lyttleton bought the estate and lived there until 1971, when Jeremy Pinckney bought the house. Pinckney remained there for six years, after which the estate was sold once again. A series of others bought and sold Trafalgar Park over the following years. Michael John Wade of Besso Limited bought the house in 1995, by which time it needed extensive restoration.[1]

The renovation of the estate began after enough parkland had been returned from the Longford Estate. The south stable has been converted into offices.

The estate and house today

Since 1995, Trafalgar Park has become a hive of activity; from films, to weddings and corporate events, the estate is rarely left empty. Films which have been made at the estate include:

Conferences and day-away board meetings[7] are held here throughout the year, as are charity fundraisers.[8] Over the years the Park has been host to associations such as the National Trust, The Civic Trust and the Salisbury Hospice.[8] Tours are sometimes arranged here although the house is closed to the public.[1]

Due to the expansive and lavishly decorated house and grounds, Trafalgar Park is often used for weddings and civil ceremonies. About 15 to 20 wedding receptions are held here each year. Ceremonies usually take place in the baroque hall, the saloon, or the Cipriani room, with capacities of 120, 50 and 15 people, respectively.