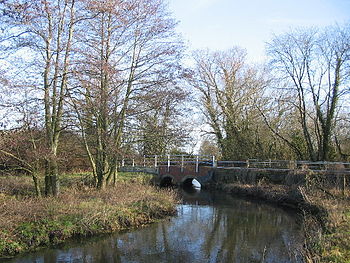 The Wylye at Norton Bavant

The River Wylye (ˈwaɪli) is a little river of Wiltshire; a chalk stream of champagne-clear water flowing over gravel. Consequently, it is popular with anglers keen on fly fishing.[1]

This river is 28 miles long, rising in the White Sheet Downs and ultimately entering the River Nadder at Wilton. It appears to be the river after which Wiltshire is named, for Wilton is named after it and Wiltshire is in turn be named after Wilton. An even earlier name for Wiltshire is a tribal name, Wilsæte[2]', meaning "Wylye settlers".

A half-mile stretch of the river and three lakes in Warminster are a Local Nature Reserve.[3][4]

It rises below the White Sheet Downs just south of Maiden Bradley in Wiltshire, and after flowing through the Deverill valley, forms the southern edge of Warminster. It then heads generally east south east, forming the Wylye Valley, into which the A36 road and the Wessex Main Line are also squeezed. The river passes through the parishes of Norton Bavant, Heytesbury, Knook, Upton Lovell, Boyton, Codford, Wylye and Wilton, near the southern edge of Salisbury Plain, and is fed by ephemeral, winterbourne streams so water flow can vary.[5]

The Wylye valley is a picturesque valley dotted with small chocolate box villages composed of thatched cottages and stone-built pubs.

The villages located on the River Wylye from the source to its meeting with the River Nadder are: