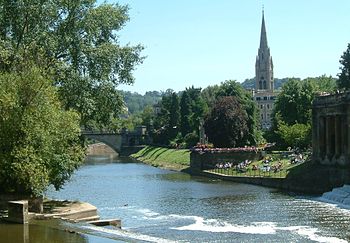 The Avon in Bath

The River Avon is a West Country river, flowing for 75 miles through three counties to the Severn Estuary at Avonmouth below Bristol. It was the Avon which made Bristol one of the great ports of the kingdom, a status retained until the nineteenth century, and which beautified Georgian Bath long before the Regency architects took the city in hand.

The Avon rises just north of the village of Acton Turville in Gloucestershire, dividing into two before merging again and flowing through Wiltshire. In its lower reaches from Bath to the Severn Estuary at Avonmouth near Bristol the river is navigable.

The Avon is 75 miles long; the 19th-longest river in the United Kingdom, although just 19 miles separate its source and its mouth as the crow flies.

The name "Avon" belongs to several rivers in the British Isles, of which two have particular fame; the Avon of Somerset, as the river of Bath and Bristol, and the Avon of Warwickshire as the river of Stratford-upon-Avon. Both are tributaries of the River Severn and both pass a small part of their course in Gloucestershire. Another famed Avon is that which flows through Salisbury, so that two like-named rivers flow through Wiltshire.

The name "Avon" is from Old Welsh, and simply means "River"; the modern Welsh for river is afon.

The Avon rises in Gloucestershire east of the town of Chipping Sodbury in Gloucestershire, just north of the village of Acton Turville. It first flows in a somewhat circular path, river draining east and then south through Wiltshire.

The river's first main village is Luckington, two miles inside the Wiltshire border, and then Sherston. At Malmesbury the Avon swallows its first notable tributary, the Tetbury Avon, which rises just north of Tetbury in Gloucestershire and which is known locally as the Ingleburn (which is from the Old English for "English brook"); the two rivers almost meet above Malmesbury but their path is blocked by a rocky outcrop of the Cotswolds, almost creating an island for the ancient hilltop town of Malmesbury to sit on. Upstream of this confluence the river is sometimes referred to as the 'River Avon (Sherston Branch)' to distinguish it from the Tetbury Branch.)

After the Avon swallows the Ingleburn, it then turns south east away from the Cotswolds and then quickly south into the clay Dauntsey Vale, where it is joined by the River Marden, until it reaches the biggest town so far, Chippenham. The wide vale is now known as the Avon Vale, and the river flows on by way of Lacock to Melksham, then turns north-west through Bradford on Avon.

Bradford on Avon is an ancient town on delightful stretch of the Avon. The town grew up around a ford across the river Avon, giving the town its name Bradanford be Afne in the Anglo-Saxon Chronicle for 652;[1] bradanford means "broad ford". The river bears a fine, stone bridge here, built in Norman days.

The Avon Valley between Bradford on Avon and Bath is a classic geographical example of a valley where four forms of ground transport are found: road, rail, river and canal. The river passes under the Avoncliff and Dundas Aqueducts as it comes into Somerset and at Freshford is joined by the River Frome.

The stretch of river below and above the aqueducts, where it is joined by Midford Brook, is used by the Bluefriars of the Monkton Combe School Boat Club up to six days a week since at least the 1960s.

Pulteney Bridge and the weir at Bath

The steep-side hills close to Bath force the Avon into a great loop north to Bathford, where it is joined by the Bybrook River, and Bathampton, joined by the Lam Brook at Lambridge in Bath.

In Bath the river enters a Georgian city where the river's presence is honoured by gardens, riverside mansions and graceful bridge. It passes under the Cleveland Bridge then the famed Pulteney Bridge and at once over the horse-shoe shaped weir. At once past the weir, the river is navigable to the sea.

At Bath below the weir, the river is joined by the Kennet and Avon Canal at Bath Locks. Together with the Kennet Navigation and the River Thames, it provides a through route for canal boats from Bristol to London. 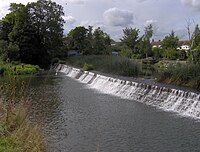 Beyond the junction with the Kennet and Avon Canal, the Avon flows out of Bath and from Swineford to the sea it marks the boundary between Somerset to the south and Gloucestershire to the north. It heads on past Keynsham towards Bristol.

For most of the distance from Bath, the river follows its natural river bed, but with six locks overcoming a rise of 30 feet. From Bath to Netham Lock where it divides into the New Cut and the Floating Harbour is 12 miles. The stretch is made navigable by the use of locks and weirs.

Downstream of central Bristol the river passes through the deep Avon Gorge, spanned by Brunel's Clifton Suspension Bridge, the river is tidal and is navigable by sea going vessels at high tide but drying to a steep sided muddy channel at low tide. It was largely the challenge of navigating this section that sealed the fate of the Floating Harbour as commercial docks, and saw them replaced by docks at Avonmouth where the Avon joins the Severn Estuary.

Before reaching its mouth it is joined by the River Trym at Sea Mills which was the site of Portus Abonae a Roman port. Shortly after it passes the village of Pill on the southbank where the Pill Hobblers were based in order to tow ships up the river to Bristol and where yachts and other boats still have moorings in Chapel Pill and Crockern Pill. It then passes under the Avonmouth Bridge which carries the M5 motorway.

The estuary at Avonmouth

The Avonmouth Docks are on the north side of the river in Gloucestershire and are one of Britain's major ports for chilled foods, especially fruit and vegetables. The first dock at Avonmouth, Avonmouth Old Dock, was opened in 1877 and acquired by Bristol Corporation in 1884. In 1908, a much larger dock, the Royal Edward Dock, was opened. The docks form part of the Port of Bristol and were operated by the Port of Bristol Authority, part of Bristol City Council, until 1991 when the council granted a 150-year lease to the Bristol Port Company.

The Royal Portbury Dock is located on the southern side of the rivermouth, in Somerset. The deepwater dock was constructed between 1972 and 1977, and is now a major port for the import of motor vehicles. The Royal Portbury Dock has the largest entrance lock into any port in the United Kingdom, accommodating vessels up to 135-foot beam, 950-foot length and 47½-foot draft.