The house is a moated manor house built around 1465–1480 for Thomas Tropenell, a modest member of the landed gentry who made a fortune as a clothier. The independent hall, lit on both sides, is flanked by unusually symmetrical gabled cross wings, with oriel windows and lower gabled porches in the inner corners, in the north-facing former entrance court, for which the richest effects were reserved. Its external symmetry, unusual for its date, is superficial.[1]

The parish church is intimately connected with the hall. The church was largely rebuilt by Tropnell, also faces into the court, which was formerly entered obliquely through a gatehouse in the west wing; Nicholas Cooper observes of the church that "the probable need to pass through the house's forecourt in order to reach it neatly demonstrates the community of secular and religious authority".[2] Part of a moat survives, but the forecourt has been opened up to the outside in a manner that changes its original inward-facing aspect.[3] 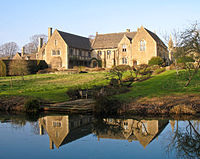 The house was altered substantially (with some of the original character lost) after the Neale family commissioned the architect Thomas Larkin Walker, a pupil of Pugin, to carry out a detailed survey of the manor in 1836; though his restoration proposals of 1837 were never carried out, the house was reduced and in particular, the great hall, adapted as a farmhouse, lost its ornate ceiling, with only one of the original bosses surviving.

Externally there is a garden with four "tree houses", groups of four clipped yews that have grown together and been hollowed out inside to allow one to walk through. A feature of the church is the unusual "bellcote", a stone belfry built on to the gable peak.

The house and garden were purchased by George Fuller MP (of Neston Park) in the early 1900s, and restored and furnished between 1905 and 1911 by his fourth son, Major Robert Fuller, under the guidance of Sir Harold Brakspear. The restoration included a sympathetic garden design by Alfred Parsons.

Robert Fuller gave the property to the National Trust in 1943, and it is open to the public.[4] Robert Floyd, grandson of Robert Fuller, and his family live here and manage the property for the Trust. Tours of the house are at fixed times and visitors are escorted by a guide. The historic Tropenell Cartulary is still kept at the house. 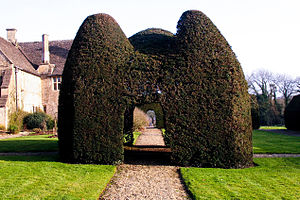 The house and grounds have been used as a filming location since the end of the 20th century, including: