There is a large clock, called the Jubilee clock, which was erected in 1898 in honour of Queen Victoria's Diamond Jubilee the preceding year. It stands outside The Vale Hotel in the High Street, where the Town Cross once stood. There are two replicas of the cross in Cricklade; one is in the churchyard of St Sampson's, the other at St Mary's, and there is local rivalry as to which one is now believed to be the original.

On 25 September 2011 Cricklade was awarded The Royal Horticultural Society's 'Champion of Champions' award in the Britain in Bloom competition.[1] 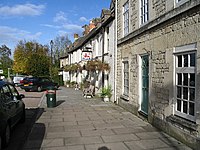 Cricklade was an important burh, or fortified town, in the 9th century, chose as the strategic spot where the Roman road Ermin Street crosses the River Thames. A royal mint was established here.[2]

Cricklade is one of thirty burhs recorded in the Burghal Hidage document, which describes a system of fortresses and fortified towns built around Wessex by King Alfred. Recent research has suggested that these burhs were built in the short period 878-9 both to defend Wessex against the Vikings under Guthrum, and to act as an offensive to the Viking presence in Mercia. It is argued that the completion of this system, of which Cricklade – situated only a little way down Ermin Street from Cirencester, the Viking base for a year – was a key element, precipitated the retreat of the Vikings from Mercia and London to East Anglia, according to the Anglo-Saxon Chronicle in late 879.

The square defences of the fortification were laid out on a regular module. They have been excavated in several places on all four of its sides by a number of archaeologists since the 1940s, and is possibly the most extensively sampled fortification of the period. In the initial phase, a walkway of laid stones marked the rear of a bank of stacked turves and clay, which had been derived from the three external ditches.

In the second phase, the front of the bank, which after probably only a short period of time had become somewhat degraded, was replaced by a stone wall. This encircled the defences on all four of its sides. The manpower needed to build this was probably roughly the same as was needed to build the original turf and clay defences. This wall, which would have considerably strengthened the defensive capabilities of the burh, has recently been suggested as having been inserted in the 890s. That other burhs of the Burghal Hidage were also strengthened with stone walls suggests that this was part of a systematic upgrade of the original defensive provision for Wessex which was ordered at this time by the king.

The third phase is marked by the systematic razing of the stone wall, which was pulled down over the inner berm (the space between the wall and the inner ditch). Stones from the wall were used to fill the inner two ditches, which demonstrates that this process was deliberate. A similar phase can be observed in the archaeological record at Christchurch, Hampshire, another burh of the Burghal Hidage. Similar observations at other burhs suggests that this phase of destruction of the defences was implemented over the whole of Wessex, and must therefore have been the result of a concerted policy, again by inference on the part of the king. The most reasonable historical context for this seems to be war with the Danes which led ultimately to the accession of King Cnut in the early 11th century, or an order by Cnut to prevent the burhs' being seized and used against him by his rivals.

The fourth phase is marked by the reuse of the original Anglo-Saxon defences by the insertion of a timber palisade along the line of the original wall. This probably marks a phase of the re-defence of the town during the Anarchy; the civil war during the reign of King Stephen.

There is little archaeological evidence for the community who were protected by these defences in the Anglo-Saxon period. There is some indication that streets were laid out in a regular fashion behind the main north-south High Street. This led through a gate in the northern line of the defences to a causeway over the floodplain of the Thames to a bridge over the river, which was probably of a defensive nature.

On John Speede's map of Wiltshire (1611), the town's name is recorded as Crekelade. 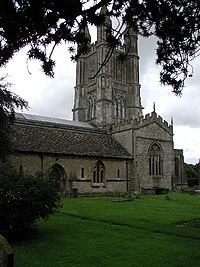 Dating back to the 11th century, the church has the third longest bellropes in Britain. The present church was built on the remains of another, Saxon church, of 890AD.

The main part of the church was built between 1240 and 1280, though on closer inspection, earlier work can be found. The grand, four spired belltower, the dominating landmark of the town, was built much later, between 1551 and 1553, by the Duke of Northumberland, father in law to Lady Jane Grey.

When St Mary's Church of England parish church (The Parish of North Meadow – one of the smallest parishes in Britain) was declared redundant by the Church of England, it was leased in January 1984 for use by the local Roman Catholic congregation. The building was founded nearly 1,000 years ago and its features include a fine 12th century chancel arch and mediæval preaching cross.

The Friends of St Mary's Cricklade was formed in 1998 to care for the building and a restoration appeal has been launched. A Latin rite mass has been celebrated at various places in Cricklade from about 1939.

In 1955, a former Baptist church was acquired by the United Reformed Church[3] and re-opened as the Church of St Augustine of Canterbury. 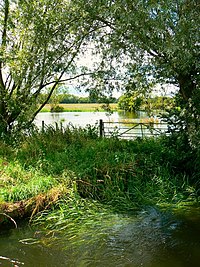 Today, the town's main claim to fame is the large nature reserve, North Meadow, which preserves some 80% of Britain's wild Snake's Head Fritillaries in its 150 acres, which flower in late April to early May. The meadow is situated between two rivers, the Thames and the Churn, and the unique habitat for the fritillary was created by winter flooding. Such meadows were once common in Britain, but with the advent of modern farming many were drained and ploughed for arable crops from the 1730s onwards. In the case of North Meadow, it escaped such a fate by virtue of the preservation of the mediæval Court Leet, which made sure the land was held in common. The land is managed by Natural England[4] and is run with the support of the Court Leet.

In 2000, a disused airfield called Blakehill was bought from the Ministry of Defence by Wiltshire Wildlife Trust[5] to form a second larger meadow of around 600 acres, which was opened to the public in 2005. It rears a small quantity of organic grade beef, usually using rare breeds such as Longhorns.

Cricklade Town Council with help from Cricklade Bloomers built a town garden on an open space near Waylands called Saxons Rest which included two large flag poles. This caused some controversy but only from some residents in the immediate area who considered that their view across the open space would be spoilt and that there would be noise from the halyards on the flag poles. Once built the consensus was that it was an attractive feature in the town and enhanced the area. The open space to the rear of the garden is a scheduled monument as this is the location of the Saxon Town walls, although no longer visible, whereas the land that the garden is built on, whilst historically as important had been built on in the past and therefore the ground has been desturbed and is of less significant.

There is also the local museum in Calcutt Street run by the Cricklade Historical Society housed in a former Baptist chapel. T R Thomson of Costorphine was a long-time resident of Cricklade and a moving spirit behind the establishment of the society. His book, Materials for a History of Cricklade, and various articles have served to preserve and enhance a study of local history in the town.

Cricklade Business Association[6] was set up to represent the local business community, the association also has close links to other non-profit making businesses, such as the Rotarians, Waylands Trust and the charity running the Leisure Centre.

Cricklade has many public houses; the list currently includes The Vale, The Old Bear, The White Hart, The White Lion, The Red Lion, The White Horse Member's Club and the Leisure Centre.

The Cricklade Triathlon runs in the summer for both adult and Junior forms; for the last few years the events were held on different days. The first to coincide with the Leisure Centre's open day, run to say thanks to the town for their support to keep it open. This year it returns to a single day event.[8]

Cricklade Cricket Club has been established for over 100 years, located on the North side of Cricklade the ground (Southam) is sited on the edge of the river Thames. For the 2011 season the club is running 2 Senior Saturday League teams and 3 youth teams (U-15, U-11 & U-9's) in the Cotswold District Cricket Association (CDCA).

The Thames Path runs through Cricklade. It heads downstream on the southern bank, until it reaches Eysey Footbridge, where it crosses to the other side.

The North Wilts Canal, opened in 1819, passed just to the west of the town. It linked the Thames and Severn Canal with the Wilts and Berks Canal. Abandoned in the early twentieth century, parts are now being restored.[10]

Cricklade railway station closed in 1961 and all trace of the station has now gone. Part of the railway route, though, has been opened as a cycle path (national cycle route 45). South of the town, the Swindon and Cricklade Railway is restoring the line as a leisure facility. Since 2007 passenger trains have been run between Blunsdon railway station and Hayes Knoll station, and the line is currently being extended towards both Cricklade and Swindon.

The A419 Swindon to Cirencester road by-passes the town to the northeast.