Wanlockhead is a village in Dumfriesshire, nestling in the Lowther Hills, part of the Southern Uplands chain. It stands one mile south of Leadhills at the head of the Mennock Pass.

Wanlockhead has made a claim to be the highest village in Great Britain, though Flash, Staffordshire beat it by a short head after an Ordnance Survey measurement. Remote as it is, the village can be accessed via the B797, from both the A76 and the M74.[1][2] 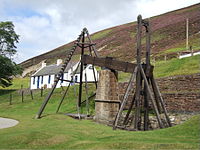 The village was called Winlocke until 1566.

Wanlockhead owes its existence to the lead and other mineral deposits in the surrounding hills. These deposits were first exploited by the Romans, and from the 13th century they began to be worked again in the summer. The village was founded permanently in 1680 when the Duke of Buccleuch built a lead smelting plant and workers' cottages.[3]

Lead, zinc, copper and silver were mined nearby, as well as some of the world's purest gold at 22.8 carats, which was used to make the Scottish Crown. Wanlockhead became known as "God's treasure house" from the richness of its mineral resources.[3] 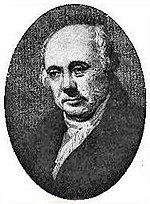 The village had a curling club which was formed in 1777 and there were also quoits, bowling clubs, a drama group and a silver band which had instruments purchased for them by the Duke of Buccleuch.[3]

William Symington was from Leadhills, but lived and worked in Wanlockhead. His fame lies in the fact that he designed the engine used to power the world's first steamboat. This boat was successfully tested on Dalswinton Loch near Ellisland on 14 October 1788. Dalswinton was the home of Robert Burns's landlord, Patrick Miller.[2][5]

Robert Burns and an associate, Thomas Sloan, visited Wanlockhead in the winter of 1789-90. The weather was very icy and they decided to have their horses' shoes 'frosted', that is sharpened to increase the grip. They had to wait their turn and took shelter at Ramage's Inn, where Burns wrote a poem entitled Pegasus at Wanlockhead. Pegasus was the name of Burns' horse.[2][6] Burns also visited Wanlockhead in January 1792 in order to explore the lead mines. He was accompanied by Maria Riddell, the sister of Robert Riddell of Friar's Carse. They breakfasted at Sanquhar and then took a poste-chaise to the mines. They went a considerable distance into the mines, braving the dark, wet and cramped conditions at first; however they had to turn back as Burns found the poor air very distressing. Burns did not record this visit, but Maria included the details in a letter.[7]

The village now features a lead mining museum and industrial equipment from the 18th century and is a popular tourist destination.

Wanlockhead is on the Southern Upland Way, a walking trail that traditionally starts at Portpatrick on the west coast, in Wigtownshire, and finishes some 212 miles away at Cockburnspath on the east coast, in Berwickshire.

The village is also the home of what might be the highest pub in Britain, the Wanlockhead Inn which opened in 2003; an earlier pub situated on a track rising from the other side of the main road through the village was considerably higher, but closed in the late 1990s.

Wanlockhead Miners' Library is the second oldest subscription library in Europe and was established on 1 November 1756 with 32 male members who mainly funded the purchase of the books, etc.; a contribution was also made by mining companies who were keen to encourage such acts of 'self-improvement' amongst the miners. The Duke of Buccleuch, as the land owner, was a major patron of the library. The library was essential in facilitating a level of educational achievement that allowed some miners and their children to escape the toil of mine work.

The school housed the library at first, but as the number of books increased, it became necessary in 1787 to move the library to a cottage given for this express purpose by the mine overseers. However the cottage was a small one and it was found to be necessary to build a larger building. The number of books purchased through subscription eventually rose to over 2,000 and in 1851 a new library was built and survives to this day.[8]

The beam engine and waterbucket pumps were introduced into Wanlockhead in 1745. The history on the beam engine is not certain, but accounts of similar engines have been recorded on a coal mine at Canonbie, Dumfriesshire in the 1790s. The Wanlockhead Beam Engine was built, supposedly, in the middle of the 19th century and is the only lasting example of a waterbucket pumping engine to be seen on a mine in the UK today.

The beam engine allowed miners to continue working in the Straitsteps mine and assuming that there were two strokes of the beam per minute this engine would have been able to lift around 12,810 pints an hour and requiring little attention it would have been left to do this twenty-four hours a day.[9] The wooden bucket was fed from a cistern above and once the weight of water was greater than the water above the pump piston the beam was lifted, carrying water from up to 28 metres below ground into a wood lined culvert which carried it off to the nearby burn. Periodically the weight of the piston was adjusted so that it remained heavier than the empty bucket, ensuring that the beam fell to start the cycle again.[10]

Today, Historic Scotland owns and maintains the engine. A working model of the engine is located in the Museum of Scottish Lead Mining.[11]

The village is the setting for the BBC television drama series, Hope Springs.