The local novelist Arnold Bennett referred to Longton as Longshaw in his novels centred on the Potteries towns.

Before incorporation into Stoke-on-Trent, Longton ("long village") was originally a market town in the parish of Stoke in the county of Stafford. The town still has a market housed in an attractively renovated market hall. 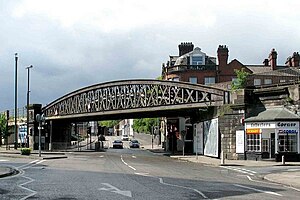 The girder bridge by the station

In March 1865, Longton and Lane End were incorporated as the Borough of Longton. Longton became one of the six towns that joined together to form the new county borough of Stoke-on-Trent in 1910. One legacy of Longton's administrative independence from 1865 to 1910 is Longton Town Hall, a prominent landmark in the town centre. In 1986 Longton Town Hall faced demolition by City Council amid considerable local protest. Work on stripping the interior had already begun before an injunction was issued and the building saved.

Together with Rochdale in Lancashire, Longton was host to the first Workers Educational Association tutorial classes. R H Tawney, known as "the patron saint of adult education",[1] taught the classes for three years from January 1908. For a time, until he moved to Manchester in 1909, Tawney was working as part-time economics lecturer at the University of Glasgow. To fulfil his teaching commitments to the WEA, he travelled first to Longton for the evening class every Friday, before travelling north to Rochdale for the Saturday afternoon class.

The district has a long history as a base for the pottery industry and several major manufacturers still have a presence, along with Gladstone Pottery Museum. Roslyn Works, which adjoins the latter, is now home to several small-scale manufacturers of ceramics.