From Wikishire
(Redirected from Trentham Gardens)
Jump to: navigation, search 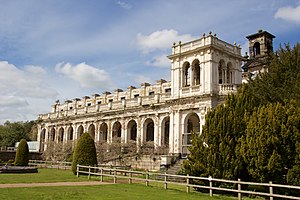 The hall and garden

The Trentham Estate lies near the village of Trentham in Staffordshire, on the southern fringe of the city of Stoke-on-Trent.[1]

Trentham Hall on the estate was once a great stately home belonging to the Dukes of Sutherland, the remains of which, in private ownership, await a possible restoration. In the meantime the estaete operates as a visitor attraction.

The estate was first recorded in the Domesday Book in 1086. At the time it was a royal manor, with a value of 115 shillings.[2] An Augustinian Priory originally occupied the site, followed by a convent.[3]Trentham Priory held land on the Trentham estate from the 11th century until the Dissolution of the Monasteries.

The property was sold in 1540 to James Leveson, a Wolverhampton wool merchant.[2] The Leveson family occupied the property and Sir Richard Leveson built a new house in 1634. The Leveson heiress Frances married Sir Thomas Gower Bt leading to the creation of the Leveson Gower family. It was a large Elizabethan house, which was probably demolished to make way for a later Georgian house.[3] Their son Sir William Leveson Gower built a new house on the site in 1690.

Around 1730 a hall was erected modelled on Buckingham House. It was substantially altered by the first Marquess of Stafford, from designs by Henry Holland,[4] in 1775–78. 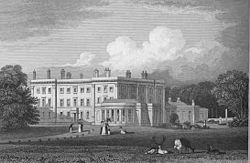 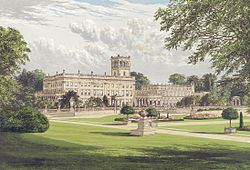 The country house of which parts remain dates from 1833–42, and was designed by Charles Barry,[5] while he was working on the rebuild of the Palace of Westminster. He was commissioned by George Granville Leveson Gower, Duke of Sutherland.[3] The focal point of the building was a campanile clock tower a hundred feet square.[4][3][6] The original approach to the hall was from the west, and an Italianate Grand Entrance was part of the western front. The one-story arcade range is semi-circular with side wings. It was made of plastered brick and ashlar, and had unfluted Ionic columns each side of its bays, as well as a balustrade above the cornice. The centre has a three-arched entrance with porte-cochére projects, and a coat of arms is carved above. The right wing incorporates an orangary that was originally built in 1808 by Heathcote Tatham.[1] Barry spent over 10 years improving the house, as well as adding a new block including state bedrooms and dressing rooms, as well as servant's quartes, a sculpture gallery, and a clock tower.[3]

In 1851 the house was described as being an "elegant mansion". It had been completely rebuilt in the previous 14 years, and had a stone front. It housed an extensive collection of paintings.[4]

The house is surrounded by an 18th/19th century park designed by Lancelot ‘Capability’ Brown.[7] It served as the Staffordshire seat of the Duke of Sutherland.[3][5]

The Hall was one of many to be demolished in the 20th century, and was one of the greatest losses of the era.[5] The River Trent had been diverted into a lake close to the hall, but sewage from nearby potteries polluted it in the early 20th century.[3]

It was offered for free to the local council in 1905, but it was abandoned by 1907. The hall was demolished in 1912-13[3] by its owner, the 4th Duke of Sutherland, who razed it after his offer to give it to the people of Stoke-on-Trent was rejected. However, the gardens and the ornamental park with its lake and the Estate woodlands have all been preserved.

The sculpture gallery, clock tower and parish church, as well as other buildings, were not demolished.[3] 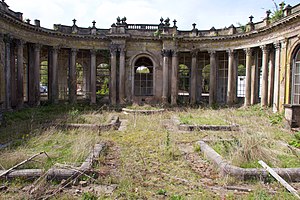 The remains of Trentham Hall, namely the Grand Entrance and Orangery, were listed on 24 January 1967. Their listing was amended on 25 April 1980. They are currently Grade II*-listed.[1] Emergency repairs to stabilise the building were carried out.[7] It is listed on the Heritage at Risk register.[3] The sculpture gallery (now covered in wisteria) and clock tower also remain.[8]

The property was purchased by St. Modwen Properties in 1996, at which point the buildings and gardens were derelict and vandalised. The surrounding Trentham Gardens were restored in 2003-04, and in 2013 they were visited by over 3 million people.[3]

St Modwen set out a plan to recreate the house according to the original designs at the cost of £35 million[5] as a five star hotel[8] with 150 rooms.,[5] a luxury spa[8] and a conference centre.[3] Planning permission was granted,[3] and initial plans aimed for a 2008 completion date, which was later revised to 2011.[5][6] However, in 2013 they stated that despite having planning permission to restore the hall, it was not economically viable to do so, given that the £30-35 million cost of restoring and rebuilding the hall would be greater than hall's value as a hotel due to the economic recession, although they stated that they were committed to restoring the hall when they could "make the numbers work".[3] As of 2015, the buildings stand derelict. 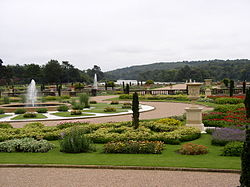 Trentham Gardens are formal Italianate gardens, part of a landscape park. The gardens are set within a large area of woodland. Together these currently together cover some 300 acres. The gardens were designed as a serpentine park by Capability Brown from 1758 onwards, overlying an earlier formal design attributed to Charles Bridgeman. Trentham Gardens are now principally known for the surviving formal gardens laid out in the 1840s by Sir Charles Barry, which have recently been restored. In 2012 the Trentham Estate was selected as the site of a Royal Diamond Jubilee wood, and a new woodland of 200,000 native oak trees will be planted on the Estate.

Since 2000 Trentham Gardens has undergone a successful and major £120-million redevelopment by St Modwen Properties as a leisure destination. The current regeneration project at Trentham includes restoration of the Italian gardens and adjacent woodlands, the creation of a garden centre and crafts centre, and various leisure attractions. The overall aim is to avoid noisy theme park-like attractions, and instead to offer "authentic experiences" to older people and younger children.

In December 2008 a transportable Ferris wheel was opened on site for tourists to get an overhead view of the Gardens, the Estate, and out over the city.[9] It later closed and was dismantled in 2009.

The gardens were the site of the Trentham Ballroom, which opened in 1931 and closed in 2002. During the Second World War it was used by the Bank of England. In the 1960s and 1970s many dance, rock and pop bands performed at Trentham Ballroom, including The Beatles, Pink Floyd, The Who, and Led Zeppelin. The Ballroom also hosted degree ceremonies for North Staffordshire Polytechnic.

Before World War I, the Staffordshire Yeomanry used Trentham as a summer military training camp between 1909 and 1914.[10]

During Second World War the Trentham Estate became a military regroupment camp for French soldiers, although there were also some Poles and a few German officers as prisoners of war. The French soldiers were a mix of the Foreign Legion, the Chasseurs Alpins (the Light Mountain Division for mountain warfare) and a tank company/[11] The bulk of the soldiers were initially marched from the train station in the pouring rain in June 1940, a march through the streets of Stoke-on-Trent which is still recalled locally and which was by some mistaken for a German invasion.

The 1,619 men of the 13th Demi-Brigade of the Foreign Legion had been in Norway, but had been pulled out to defend a line in Brittany from where they then fled to Britain[12] The Chasseurs Alpins had arrived from Dunkirk. The Trentham Camp was initially organised by the local YMCA volunteers. The pilot Marc Haucheauchemaille recorded in his diary that... "There are 6 or 7,000 men in the camp – a miracle of English organisation – in a few hours we have tents, groundsheets, cooking utensils.",[13] although proper medical facilities took longer to organise. Numbers at the camp appear to have lessened to 5,530 after the initial influx.[14]

By July 1940, the camp was split into pro=and anti-Vichy France factions. Some 600 men of the Foreign Legion chose to leave to join the Vichy Legion in North Africa.[15] Around 900 other left to join the Free French. The bulk of the French troops remained at Trentham. The attitude of local people appears to have changed after the initial arrival: there were complaints about the killing of the deer herd,[16] to the extent that estate records show that nearly all the deer were killed;[17] discipline was lax;[15] and there was extensive fraternisation with local girls.[16] By the end of the war, local people's animosity toward the remaining French was such that many of the soldiers were glad to leave.[18] 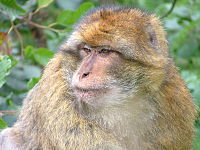 The fence around Trentham Monkey Forest

As part of the regeneration the Trentham Monkey Forest has opened and has been successful. Visitors can roam through the monkey park where 140 Barbary macaque monkeys (the same breed as the famous apes of Gibraltar) wander free in the woodlands. There are no fences in place to stop the monkeys from interacting with the visitors, although it is against park rules to touch the animals and wardens are on standby to ensure the safety of the visitors.

Trentham's Monkey Forest was opened in July 2005.[19][20] It consists of 60 acres of forest, which contain 140 Barbary macaques. There is a three-quarter mile path through the forest along which visitors walk; there are no barriers between the forest and the path,[21] although visitors are confined to the path, which has guides to ensure the safety of both the visitors and monkeys, and there is a fence around the forest. The park is one of four owned by the de Turckheim family;[20] the other three are in France and in Germany; ‘’La Forêt des Singes’’ in Lot, France, La Montagne des Singes in Alsace and Affenberg Salem in Bodensee, Germany (opened in 1976).[20][22] The forest is open to visitors every day between April and October inclusive, and opens on weekends and school holidays in February, March and November.[20]

There are two groups of 70 macaques at the forest,[19] which were originally from other parks in France and Germany[21] and inhabit different parts of the forest. The oldest macaque is around 30 years old.[19] All of the macaques are individually identified with a tattoo on their inner thigh.

One aim of the forest is to increase awareness about the endangered species; it also aims to create and preserve a gene pool and to re-introduce groups of macaques into the wild. More than 600 macaques from the forest's three sister parks have been re-introduced to the wild at the Atlas Mountains, Morocco.[19][23] The forest also has a conference venue.[24] The forest supports research into the biology and social behaviour of the macaques at the park.[20]