West Bromwich is a town in Staffordshire, within the Black Country and contiguous with the surrounding towns of the Black Country conurbation. It is five miles north-west of Birmingham lying on the A41 London-to-Birkenhead road.

The M5 motorway between Staffordshire and the West Country passes through the middle of the town on an elevated section, with views down over the working landscape. Just to the north is its junction with the M6 motorway, putting West Bromwich at the hub of Britain's motorway network.

The name of West Bromwich is from Bromwich, now Broomwich Heath. The name appears in the Domesday Book of 1086 as Bromwic from the Old English for "broom village" (after the shrub broom). It is believed that West Bromwich may have originally been part of the Handsworth parish.[1]

A Benedictine priory existed in West Bromwich from the 12th century around which the settlement of Broomwich Heath grew. In 1727, the town became a stop on the coaching road between London and Shrewsbury and its growth began.

In the 19th century, coal deposits were discovered, ensuring that the town grew rapidly as an industrial centre, with industries such as spring, gun and nail making developing. Most of the coal deposits were found below the ground a mile or so west of Broomwich Heath, and so the "new" town adopted the name West Bromwich. Well before the end of the 19th century, West Bromwich had established itself as a prominent area to match older neighbouring towns including Dudley and Walsall, so much so that in 1888 it became a county borough.

Charlemont Hall, built during the 1750s, stood on the west side of the present Charlemont Crescent, in the Charlemont and Grove Vale district of the town. Charlemont Hall was described c. 1800 as 'a lofty neat-looking house of brick, faced with stone, with iron palisades etc. in front'. An east wing was added in 1855. The last occupant was the widow of Thomas Jones, town clerk of Wednesbury 1897–1921. The house was demolished in 1948, and is now covered by a number of smaller detached homes. Much of the surrounding area was developed during the 1960s as the Charlemont Farm housing estate, which ia a mix of private and council housing.

West Bromwich suffered heavily in the Cholera epidemic of 1831 which spread northwards into the town. A temporary board of health was set up and a hospital opened in the former Revivalist chapel in Spon Lane. The natural gradual slope of the land provided drainage within the soil, however, urbanisation made this increasingly difficult and drainage along the streets was described as inadequate. The West Bromwich Town Improvement Commissioners was established in 1854, and they tackled the drainage problem in the town. They appointed members to new titles and in the 1880s bought land in Friar Park for a sewerage farm. 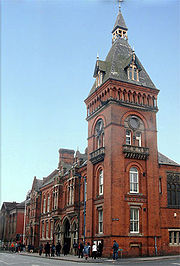 By the outbreak of First World War in 1914, many of the older houses that had been built to house workers during the Industrial Revolution were becoming unfit for human habitation. Sanitation was inadequate, decay was rife, and the homes were becoming a danger to the health and safety of their inhabitants. After the end of the war, the local council started building new homes to rehouse people from the rundown town centre. However, there are still many late 19th century and early 20th century buildings around the centre of West Bromwich today.

Council housing arrived in the town in 1920 when the first houses were built on the Tantany Estate to the north of the town centre.[2]

The town suffered significant air raid damage in Second World War, with no less than 58 of its civilians being killed, most of them in the raids of 19 November 1940.[3]

Mass immigration from the Commonwealth took place in West Bromwich during the 1950s and 1960s, with most of these hailing from the Indian subcontinent, although a significant number of West Indian immigrants also settled in West Bromwich. The majority of these immigrants settled in the older parts of the town that were mostly made up of Victorian and Edwardian terraced houses.

The local road network was also massively improved during the 1960s and 1970s. West Bromwich is located at the extreme northern end of the M5 motorway, and has had direct access to it since the early 1960s. This gave the town an immediate fast road link to faraway places including Worcester, Gloucester, Bristol and Exeter. Traffic passing through West Bromwich on the main route from Wolverhampton to Birmingham was diverted along the new dual carriageway, the Northern Loop Road (also known as The Expressway), after its opening in 1972, with another dual carriageway being built to link The Expressway with neighbouring Oldbury.

As with many other parts of the Midlands, West Bromwich was hit badly by the recessions and restructuring of the mid 1970s and early 1980s. Many local factories closed as there was no longer an adequate demand for the supply they were generating.

West Bromwich was among the many towns and cities in England affected by the widespread rioting in August 2011. On 9 August, shops closed their doors early to combat looting and vandalism, at the time many thought this was normal routine, however, widespread acts of vandalism and violence followed. Police closed the main roads leading into the town until the following morning.[4]

West Bromwich is an industrial town, and not an ex-industrial town like its neighbours: the fist sight of the town which greets visitrors will be the large number of industrial and distribution units here.

Engineering and chemicals are important to the town's economy, as it played a crucial part in the Industrial Revolution during the 19th century and still retains many manufacturing jobs to this day, despite a steady nationwide decline in this sector since the 1970s.

Many local towns, particularly Dudley, lost many of its major stores around the time that the Merry Hill Shopping Centre which was developed at Brierley Hill during the second half of the 1980s as businesses looked to take advantage of the Enterprise Zone incentives that the centre offered. West Bromwich's fortunes as a retail centre were affected by the Merry Hill development. This contributed to the closure of its Marks and Spencer store on 25 August 1990, along with the Dudley store, to be replaced by a new store at Merry Hill, with most of the staff at the new store being transferred from either West Bromwich or Dudley. British Home Stores also pulled out of the town around the same time to be replaced by a new store at Merry Hill which opened in November 1989 and also spelled the end of the Dudley store. The town lost another big retail name in 2005 when the Littlewoods store closed; it was later occupied by New Look. Retail developments around Oldbury, beginning with the SavaCentre hypermarket in 1980, have also affected trade in West Bromwich.[8] The recession beginning in 2008 has pushed the town centre further into decline, a notable casualty being the Woolworths store which closed on 30 December 2008 as a result of the retailer going into liquidation; the building has still not been re-occupied almost three years later.[9]

Several more factories have closed in more recent years as manufacturers look to countries where the labour is cheaper, but West Bromwich remains a busy industrial area despite the decline of the last 35 years.

West Bromwich's road links were further enhanced in 1995 on the completion of the Black Country Spine Road that gives an unbroken dual carriageway link to Bilston. The completion of this new road opened up several square miles of previously inaccessible land, and has allowed several major businesses to set up along the route. This has helped relieve some of the unemployment problems in West Bromwich, although most parts of the town still have the highest unemployment rates in the Black Country, and unemployment has risen again since 2008 as a result of the latest recession.

Churches in West Bromwich include:

In 1875, being locked out of a packed Evangelist meeting in Birmingham caused John Blackham of Ebenezer Congregational Church to start the Pleasant Sunday Afternoon Movement.[10] 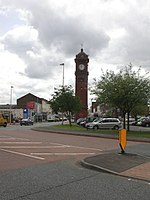 West Bromwich Albion FC was founded in 1878 and in 1888, one of the twelve founder members of the Football League.

Sandwell Hall was the seta of William Legge, 2nd Earl of Dartmouth. Legge was unusual as an aristocrat of this period by being a Methodist and attending the Wednesbury Methodist meetings, where fellow Methodists, many of them colliers and drovers, knew him as "Brother Earl".

West Bromwich Town Hall, situated in the centre of the High Street, is a Grade II listed building. It was built between 1874 and 1875 in brick and stone to an Italian Gothic design, and its interior reflects the Victorian interest in Gothic and Mediæval architecture. Its Grand Organ, built in 1862, is considered to be of historic importance for its musical and technical qualities.[11][12]

West Bromwich Manor House on Hall Green Road was built by the de Marnham family in the late 13th century as the centre of their agricultural estate in West Bromwich. Only the Great Hall survives of the original complex of living quarters, agricultural barns, sheds and ponds. Successive occupants modernised and extended the Manor House until it was described in 1790 as “a large pile of irregular half-timbered buildings, black and white, and surrounded with numerous out-houses and lofty walls.” The Manor House was saved from demolition in the 1950s by West Bromwich Corporation which carried out an extensive and sympathetic restoration of this nationally important building. 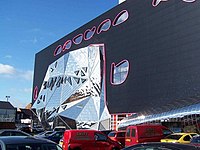 In 2004, a modern community arts centre known as "The Public" was developed in the town centre. Designed by the architect Will Alsop, the £52 million venue consists of a massive cuboid building constructed in dark grey and silver metal cladding with irregularly-shaped windows edged in magenta, all designed to draw the eye and absorb taxpayers' money. Its appearance has drawn comparisons with a fish tank.[13] The development was beset by financial difficulties, going into administration and finally finished in 2009.

Many people refuse to visit the venue as they consider it a waste of money and an extreme eyesore.[14] A sound production and music industry practice course is run in the building by Major Key Studios and is provided by the University of Wolverhampton.

The town centre was a retail street but much of it now has been procured by Tesco for the development of a Tesco Extra Store and shopping centre called New Square, West Bromwich. Since the early 2000s the tenants of homes and businesses have slowly moved out of the site to make way for the development. Cronehills Primary School (staff and pupils) relocated to the newly built Eaton Valley Primary School, which opened in September 2009. The police station relocated to a brand new building the other site of the ring road. Major works started on the site during October 2011 and the development should be complete by late Spring 2013. 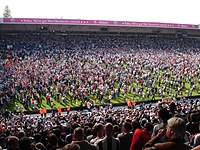 I would rather spend a holiday in Tuscany than in the Black Country, but if I were compelled to chose between living in West Bromwich or Florence, I would make straight for West Bromwich.
—JB Priestley, English Journey