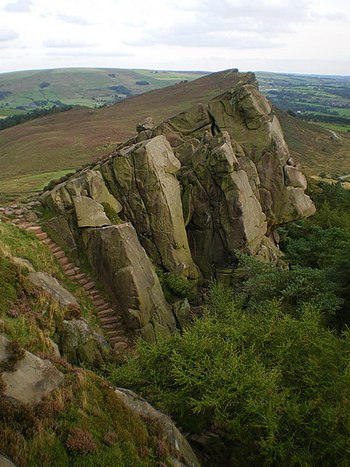 The Staffordshire Moorlands are the mountains which fill the north-east of Staffordshire; they form the southern end of the long chain of the Pennine Hills. These hills, or at least the highest of them, might be considered a part of the Peak District, though the part in Staffordshire is known as the Moorlands.

The terrain is mostly moorland with forests and lakes stretching out across rolling hills and crags. Some of the higher moorland has been largely abandoned for farming. In the Roaches (a series of gritstone outcrops within the Peak Park) several Wallabies roamed free for many years.[1] One of the highest points in the Moorlands is the Roaches which rises to 1,656 feet, while a little beyond is Cheeks Hill, on the border with Derbyshire on which is Staffordshire's highest point, at 1,705 feet.

A large proportion of the 'white peak' area of the Peak District is contained within the Staffordshire Moorlands. This includes such places as one half of Dovedale, the Manifold Valley including Thor's Cave, Wetton Mill, Longnor and Butterton.

Amongst the Staffordshire Moorlands a village which claims to be the highest in Britain; Flash. The village stands at 1,518 feet above sea level. This record was confirmed in 2007 by the Ordnance Survey after Wanlockhead in Dumfriesshire also claimed the record. The BBC's The One Show investigated the case in a bid to settle the argument and Flash turned out to be the higher of the two.

William Camden in his Britannia wrote of the Staffordshire Moorlands, and here he dropped his unsubtle hints of the need for a name for the Backbone of England, named "Pennines" only after his day:

The North part riseth up and swelleth somewhat mountainous, with moores and hilles, but of no great bignesse, which beginning here, runs like as Apennine doth in Italie, through the midest of England with a continued ridge, rising more and more with divers tops and cliffs one after another even as far as Scotland, although oftentimes they change their name. For here they are called Mooreland, after a while the Peak, Blackstone Edge, then Craven, anon as they go further Stanmore, and at length being parted diversly, as it were, into hornes, Cheviot. This Mooreland, so called for that it riseth higher ito hils and mountaines, and is withall lesse fruitfull (which kinde of places we cal in our language Moores) is a small country verily, so hard, so comfortlesse, bare, and cold that it keepeth snow lying upon it a long while, in so much as that of a little country village named Wotton lying here under Weverhil the neighbor inhabitants have this rime rise in the mouth, as if God, forsooth, had never visited that place:

Yet in so hard a soile it breedeth and feedeth beasts of large bulke and faire spread. The people heere dwelling observe that when the winde sitteth West, it is alwaies raine, but the East and Southwind, which in other places brew and broach raine, bring faire weather, unlesse the winde turne from West into the South, and this they ascribe unto the vicinity of the Irish sea. Out of these Moores most rivers in this shire doe spring, but the chiefe are Dove, Hanse, Churnet, Teyn, Blith, and Trent himselfe, who receiveth every one of than and conveieth them all to the sea. Dow or Dove, whose bankes are reared out of solid hard lime stone, which they burne and use for compast to manure and enrich their fields withall, doth swiftly run along the most part of the East side of this County and separateth it from Darbyshire, holding on his course in a Cleyish channell without any beds or shelves of mudde, through a soile consisting of the said Lime-stone: from whence it sucketh out such fertility that in the very middest of Winter the Medowes on both the bankes sides carry a most pleasant and fresh greene hew. But if it chance to swel above the bankes and overflow the Medows in April, it battelleth [fertilizes] them like another Nilus and maketh them so fruitfull that the inhabitants use commonly to chant this joyfull note:

In April Doves flood
Is worth a Kings good.

The people of this county have been particularly famous, and more than any other county in England, for good footman-ship, and there have been, and still are among them, some of the fleetest runners in England; which I do not grant to be occasion'd by any particular temperature of the air or soil, so much as to the hardy breed of the inhabitants, especially in the moorlands or northern part of the county, and to their exercising themselves to it from their child-hood; for running foot-races seems to be the general sport or diversion of the country.