From Wikishire
(Redirected from Stoke on Trent)
Jump to: navigation, search

Stoke-on-Trent, often abbreviated to Stoke is a city in Staffordshire, which forms a linear conurbation almost 12 miles long, with an area of 36 square miles. Together with the Borough of Newcastle-under-Lyme, Stoke forms "the Potteries Urban Area" with a population of 457,165.

Stoke-on-Trent is considered to be the home of the pottery industry. The area of Staffordshire in which it lies is commonly known as The Potteries. Formerly a primarily industrial conurbation, it is now a centre for service industries and distribution centres.

The conurbation was formed by the joining together of six originally separate towns and numerous villages in the early-20th century. It continues to be polycentric. The new federated town took its name from the town of Stoke-upon-Trent, where the administration and chief mainline railway station were located. After the union, Hanley emerged as the primary commercial centre in the city, despite the efforts of its rival, Burslem.

The six component towns run in a rough line from north to south along the A50 road in order:

Although the city is named after the original town of Stoke, and the City Council offices are located there, the city centre is usually regarded as being in Hanley, which had earlier developed into a major commercial centre.

The towns were together incorporated as a borough in 1910, and granted city status in 1925. In 1934, J B Priestley wrote of this recent administrative creation:

There appeared on paper the mythical city of Stoke-on-Trent. But when you go there, you still see the six towns, looking like six separate towns. Unless you are wiser than I was, you will never be quite sure which of the six you are in at any given time.[1]

Civilised man, except in his capacity as a working potter, has not arrived here yet, just as the real city of Stoke-on-Trent, which will no doubt be a monument of civic dignity, has not yet arrived. The small towns straggle and sprawl in their shabby undress, following the ugly fashion of small industrial towns.[1]

The six towns remained physically separate even into the 1950s, after which urban growth began to fill the gaps and create what is today a single conurbation.

Stoke-on-Trent is on occasion known as "the city of five towns", because of the name given to it by local novelist Arnold Bennett in such novels as Anna of the Five Towns. In his novels, Bennett used mostly recognisable aliases for five of the six towns (although he called Stoke "Knype"). However, Bennett said that he believed "Five Towns" was more euphonious than "Six Towns", so he omitted Fenton (now sometimes referred to as "the forgotten town").

Stoke is approximately half-way between Manchester and Birmingham[2] and the city adjoins the town and borough of Newcastle-under-Lyme standing to the west. To the east is the Peak District, which includes part of the Staffordshire Moorlands District, as well as parts of Derbyshire, Cheshire and the West Riding of Yorkshire.

The conurbation built upon Stoke is now wider than the six towns or the City's own civic area, as it has become contiguous with that of Newcastle-under-Lyme.

The name Stoke is taken from the town of Stoke-upon-Trent, the original ancient parish, with other settlements being chapelries.[3] 'Stoke' derives from the Old English stoc, a word which means little more than a 'place', but which may have raised any of several connotations, as 'dairy farm', 'dependent place or farm', 'summer pasture', 'crossing place', 'meeting place' or 'place of worship'. Stoc might have been denoted as a crossing point on the Roman road that ran from Derby to Chesterton or the early presence of a church, said by Bede to have been founded in 670 AD. The affix upon Trent was adopted much later to distinguish the village from the countless other places names 'Stoke'.

An early proposal for a federation of the six towns was made in 1888, when an amendment was suggested to the Local Government Bill to create the town as districts within an administrative county of 'Staffordshire Potteries', but was not until 1 April 1910 that the Six Towns were brought together as a single "county borough" of Stoke-on-Trent.[4]

The new borough had territorial ambitions and proposed in 1919 and in 1930 to expand westward and annex Newcastle-under-Lyme and Wolstanton but was seen off by the Newcastle Corporation.[5][6] Some expansion did take place (including Wolstanton in 1932). The borough was granted city status by letters patent in 1925, and the King authorised the appointment of a Lord Mayor from 1928. 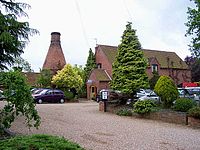 The distinctive shape of a bottle kiln

Since the 17th century the area has been almost exclusively known for its industrial-scale pottery manufacturing,[7] with such world renowned names as Royal Doulton, Dudson Ltd, Spode (founded by Josiah Spode), Wedgwood (founded by Josiah Wedgwood) and Minton (founded by Thomas Minton) being born and based there. The presence locally of abundant supplies of coal and of suitable clay for earthenware production led to the early but at first limited development of the local pottery industry. The construction of the Trent and Mersey Canal enabled the import of china clay from Cornwall together with other materials and facilitated the production of creamware and bone china.

Staffordshire had been known for pottery for many centuries, but other production centres elsewhere in Britain and in Europe and worldwide had a considerable lead in the production of high quality wares. It was largely the methodical and highly detailed research and a willingness to experiment carried out over many years, initially by one man, Josiah Wedgwood, and later by other local potters such as Thomas Whieldon, along with scientists and engineers, that nurtured the development of artistic talent throughout the local community and raised the profile of Staffordshire Potteries. With the industry also came a large number of notable ceramic artists including Clarice Cliff, Susie Cooper, Charlotte Rhead, Frederick Hurten Rhead and Jabez Vodrey.

The coal mines were nationalised in 1947, at a time when around 20,000 men worked in the industry in Stoke-on-Trent. Notable Collieries included Hanley Deep Pit, Trentham Superpit (formerly Hem Heath and Florence Collieries), Fenton Glebe, Silverdale, Victoria, Chatterley Whitfield and Wolstanton.[8] The industry developed greatly and even new investments in mining projects were planned within the City boundaries as recently as the 1990s.[9] However, 1994 saw the last pit to close as the Trentham Superpit was shut.[10]

The Stoke mining industry set several national and international records. Wolstanton Colliery, when modernised had the deepest mining shafts in Europe. In 1933, Chatterley Whitfield Colliery became the first Colliery in the country to mine 1 million tons of coal. In the 1980s Florence Colliery in Longton repeatedly set regional and national production records and in 1992 the combined Trentham Superpit (Hem Heath and Florence) was the first mine in Europe to produce 2.5 million tonnes of saleable coal.

Today the mines are all closed, though the scars of mining still remain on the landscape. Slag heaps are still visible on the skyline, now grown green with grass and wildflowers. The abandoned mines beneath the ground are inaccessible, though their presence still adds complications to many building projects and they occasionally cause minor tremors, detectable only by specialized equipment.[11]

Pots and coal have not been the only industries of importance in the towns, before nor after federation. Notably the iron and steel making industry located in the valley at Goldendale and Shelton below the hill towns of Tunstall, Burslem and Hanley. Production of steel at Shelton Steelworks ended in 1978 and instead of producing crude steel, concentrated on rolling Steel Billet train loaded in from Scunthorpe. The Rolling Plant finally closed in 2002.[12]

From 1864 to 1927 Stoke housed the repair shops of the North Staffordshire Railway[13] and was also the home from 1881 to 1930 of independent railway locomotive manufacturers Kerr Stuart & Co. Ltd.[14]

Shelton Steel Works as well as the mining operations were heavily involved in the Second World War industrial effort. Central to the RAF's success was the Supermarine Spitfire designed by R J Mitchell, born in the nearby village of Butt Lane, who had his apprenticeship at Kerr Stuart & Co. Ltd's railway works.[15]

The Michelin tyre company has long had a presence in Stoke-on-Trent. In the 1920s Michelin built their first British plant in the city. As recently as the 1980s nearly 9,000 workers were employed at the plant, now down to some 1,200.

Each town has its parish church.

Primitive Methodism was founded by Hugh Bourne, a native of Stoke, at a public gathering at Mow Cop. He originally followed the John Wesley's form of Methodism but in 1801 he reformed the Methodist service by conducting it outside. By 1811 with his brother he founded the first chapel in Tunstall.[16] He promoted Sunday schools as a method of improving children's education as well as treating women as equals. He also was involved in the temperance movement. It was from the Primitive Methodists that many early trade unions found their early leaders.[17] John Lightfoot, a leading churchman of the 17th century and rabbinical scholar, was born in Stoke-upon-Trent.

The Potteries Museum & Art Gallery holds a world-class ceramics collection. The city's past can also be explored in the Etruria Industrial Museum, the Gladstone Pottery Museum and the newly opened Ceramica in Burslem.

Most of the major pottery companies based in Stoke-on-Trent have factory shops and visitor centres. The £10-million Wedgwood Museum visitor centre opened in the firm's factory in Barlaston in October 2008. Spode offers guided tours of its factory and unique Blue Room in Stoke town centre.[18] The Dudson Centre in Hanley is a museum of the family ceramics business that's partly housed in a Grade II listed bottle kiln. It is also a volunteer centre. Burleigh in Middleport, Staffordshire|Middleport is the world's oldest working Victorian pottery. There are also smaller factory shops, such as Royal Stafford in Burslem and Emma Bridgewater Ltd in Hanley.

Ford Green Hall is an Elizabethan hall at Smallthorne.

Trentham Gardens is in the south of the city and a £100 million refurbishment was completed in 2005. Next door is Trentham Monkey Forest, which houses 140 Barbary Macaques in a 60-acre enclosure through which visitors can walk.

Each of the six towns of Stoke-on-Trent has at least one park. At 22 acres, Burslem Park is one of the largest registered Victorian parks in Britain.[19] Park Hall Country Park in Weston Coyney is the city's only National Nature Reserve, and its sandstone canyons are a Site of Special Scientific Interest.[20] Hartshill Park in Stoke is also a nature reserve, and Bucknall Park is home to the City Farm. Westport Lake in Longport is the largest body of water in Stoke-on-Trent[21] and has a nature reserve.

The Waterworld indoor swimming complex on Festival Park near Hanley is a significant children's attraction. The Alton Towers Resort is 10 miles east of Stoke-on-Trent and is one of the United Kingdom's best known attractions.

One of the legacies of, especially, the pottery industry was that Stoke had its own version of the Wakes week. Though better known in industrial Lancashire, the Stoke week is known locally as the Potters' Holidays or Potters' Fortnight and occurred as the last week in June and the first week in July and then a further week in August. This gave what appears to be strange school holidays, with the summer term having a two-week break at the end of June, then children returning to school for three weeks before taking a five-week summer holiday. With the decreased emphasis on the traditional industries this oddity has disappeared from the local schools' timetables.

The Potteries has a distinctive local dialect. It contains many local words (for example "Nesh" meaning soft, tender, or to easily get cold,[22] and "Slat" meaning to throw[22]). The best known words are familiar greetings; "duck" is used as a greeting to either men or women,[22] while "shug", short for "sugar", is usually used when closing a sentence as in "Ta Shug" (thank you sugar).

Also, Alan Povey's Owd Grandad Piggott stories which have aired on BBC Radio Stoke for a number of years are recited in the Potteries dialect by the author.[24]